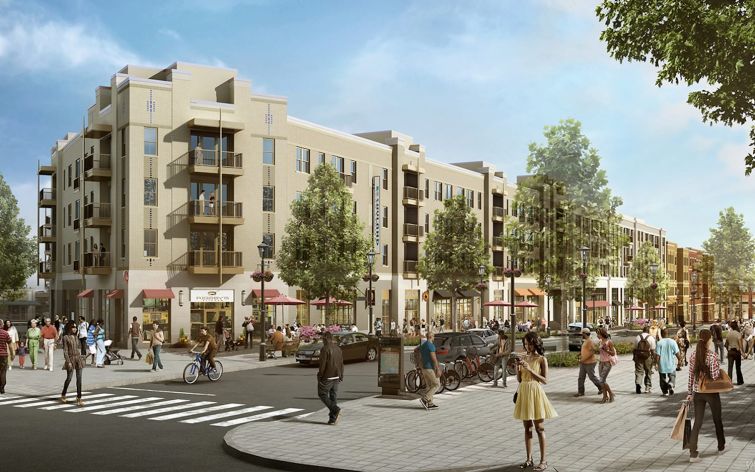 Located at 2834 Alabama Avenue SE in Ward 7, Skyland Town Center is the first town center development in Southeast D.C., and is being developed by a joint venture between WC Smith and Rappaport Companies.

“I know it’s taking time, but what we’re seeing at Skyland is a development that matches the vision of the Ward 7 community—a site with new housing, a grocery store, good amenities, and jobs and opportunity for D.C. residents,” Mayor Bowser said in her remarks. “I’m grateful for everyone who is playing a role in moving Skyland forward — the Ward 7 community, our business partners and community builders, and, of course, our [Office of the Deputy Mayor for Planning and Economic Development] team. I look forward to the continued groundbreakings, and I look forward to all the ribbon cuttings even more.”

Roaming Rooster, a Black-owned restaurant that serves fresh, free-range, grain-fed chicken, will be the first of the five new leases to open, with a projected fall opening of its planned 2,225-square-foot location.

“By using placer.ai, which harnesses data from mobile phones, we could tell a lot of our customers coming to our store at Bladensburg Road were living in this area,” Wes Neal, commercial real estate broker for Roaming Rooster, told Commercial Observer. “So, we saw this as a great opportunity for us.”

The other four leases, all of which will open in 2022, are for &Pizza, a fast-casual chain restaurant; Maizal, a South American street food eatery; Tropical Smoothie Cafe, a fast-casual cafe; and Mezeh, a Mediterranean-inspired restaurant chain.

“In leading the retail leasing, we constantly focus on the tenant mix, so that we have a development that balances both national retailers and local retailers who live within the community, Henry Fonvielle, Rappaport’s president, said. “We are pleased to welcome local operators with global food flavors to Skyland Town Center that will enhance the retail and dining experience for the neighborhood.”

A Chase Bank is scheduled to open at Skyland later this summer, and Starbucks will come to the area in 2022. CVS Pharmacy, Like That Barber Shop, and Skyland Nails and Spa are already operating at the site.

In 2019, the development added a major lease when grocery chain Lidl signed for 29,089 square feet, becoming the first grocery chain to be in the area since 2007. It’s scheduled to open in 2022.

Mayor Bowser has worked feverishly to find a retail anchor for the site since Walmart withdrew its commitment in 2016. She noted the administration was able to use eminent domain to clear a path for the development to proceed.

“I am also delighted that this announcement supports my legislation to end food deserts in Wards 7 and 8 through my three East End economic bills,” she said. “One of these bills targets nine development sites in Wards 7 and 8, including Skyland, for retail and full-service grocery stores. As such, what could have stayed a dream deferred is now not just a beacon of hope, but valuable proof of real progress through collective effort.”

Residential leasing at The Crest, the 290,000-square-foot residential property at Skyland, also began this week. The property features 263 homes — a mix of studio, one-bedroom, and two-bedroom apartments — with 53 units set-aside for those earning up to 80 percent of median family income, and another 26 designated as workforce units.