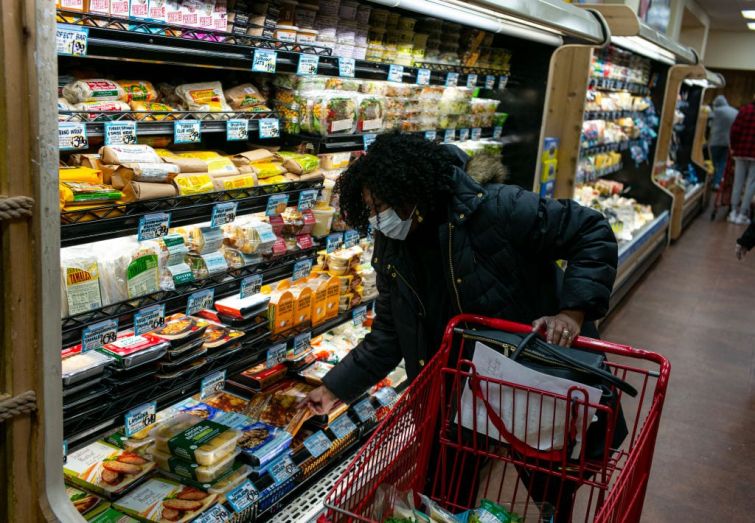 The de Blasio administration announced an expansion of zoning incentives for grocery stores, which allow developers to build larger residential buildings in exchange for including a supermarket. Photo: Robert Nickelsberg/Getty Images

Mayor Bill de Blasio on Tuesday unveiled an expansion of zoning incentives for grocery stores and subway upgrades, allowing developers to get extra floor area in their buildings in exchange for including a supermarket or improving transit.

The FRESH program for grocery stores, which has not changed much since its inception in 2009, would be expanded to 11 new community districts, including ones in Fort Greene, Clinton Hill, South Williamsburg, Coney Island and Borough Park in Brooklyn; Jackson Heights, Corona, Astoria and Far Rockaway in Queens; Soundview and Kingsbridge Heights in the Bronx; and the North Shore of Staten Island.

FRESH, which is an acronym for Food Retail Expansion to Support Health, allows developers to negotiate an additional 20,000 square feet of residential floor area in a new building in exchange for including a grocery store of at least 20,000 square feet.

Small business advocates and food policy experts have criticized the program for failing to bring grocery stores to lower-income neighborhoods where New Yorkers still struggle with access to fresh produce. The Department of City Planning said that it plans to implement “guidance” to prevent “detrimental clustering of FRESH supermarkets” in gentrifying neighborhoods that have seen a significant amount of new residential development over the past decade. The city also plans to waive up to 10,000 square feet of parking for a grocery store.

“Building a recovery for all of us means cutting red tape and supporting efforts to make our communities healthier and more accessible,” Mayor de Blasio said in a statement. “These zoning changes will help New Yorkers create the neighborhoods we all want to live in: ones with fresh food, easy access to health and wellness facilities, and equitable transit access for New Yorkers with disabilities.”

The city also revealed a new “Zoning for Accessibility” proposal, which aims to encourage developer-funded station improvements, entrances and elevators. The policy would require owners of developments near subway stations to work with the Metropolitan Transportation Authority on easements for new station entrances and elevators. The amendment would also allow developers in “high density districts” to get extra floor area in exchange for upgrading subway stations.

In addition, DCP is working to eliminate the special permit requirement for gyms, martial arts studios, spas and other health-related businesses. The rule change would eliminate the expensive and lengthy process necessary to obtain a physical culture permit, which was created in the 1970s to stem the growth of massage parlors in Times Square. Gyms and spas would be allowed to open as-of-right under the new rule.

Finally, the mayor reiterated his promise to make the popular Open Restaurants program permanent. Planners expect to “secure the future of outdoor dining by reviewing and removing zoning limitations that may hinder efforts to make the program permanent,” according to the press release. All of the proposed zoning changes are expected to enter public review this spring and be finalized by the end of the year.