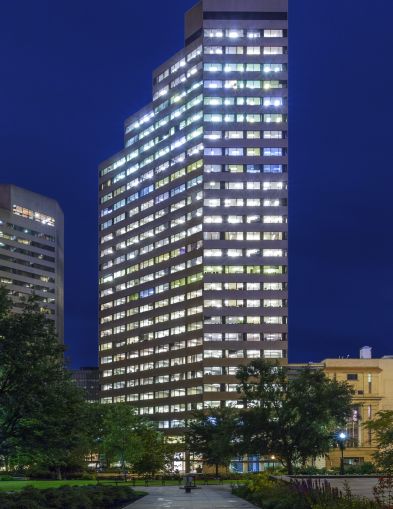 New York-based investor Group RMC has nabbed $30.5 million in debt from Voya Financial to fund its purchase of 65 East State Street, an office high-rise in Downtown Columbus, according to information from financier Walker & Dunlop, which arranged the financing on behalf of the borrower.

The three-year, floating-rate and interest-only loan helped cover Group RMC’s $36.8 million acquisition of the 26-story property from Santa Monica, Calif.-based Hertz Investment Group, which had purchased the asset a little more than 13 years ago for around $42.5 million, according to Franklin County records and a report from Columbus Business First.

Colliers International’s Dan Dunsmoor and Andrew Jameson arranged the sale, which had stalled in the spring of 2020 due to COVID-19 and didn’t reach the finish line until early November, according to the Columbus Business First report. Jameson and colleague Brett Cisler are in charge of leasing the asset out, and CBRE manages the property.

“We witnessed an incredible amount of demand for this financing given the best-in-class sponsor and the attractive asset type, despite a challenging capital markets landscape during the COVID-19 pandemic,” Adam Schwartz said in a statement about the financing package, which also included a separate, roughly $61.3 million acquisition loan from Prime Finance for Group RMC’s $75.5 million purchase of Jacksonville’s 46-story Bank of America Tower. Schwartz added that his team was able to drive “a competitive process among a number of qualified capital providers for these marquis office assets.”

Built in 1985, the property at 65 East State Street comprises around 494,500 rentable square feet and is situated in Columbus’ Capital Square area, near Columbus Commons and across from the Ohio Statehouse. The previous owner had deployed around $3 million to upgrade the property in the last few years, including an exterior facade renovation, the addition of a new conference center and fitness center with locker rooms, a renovation of the lobby and new furniture, as well as updated elevator cabs and a renovation of the exterior patio.

Despite the work, the property’s occupancy has been a question mark, sitting at around 66 percent as of last November, according to JLL data reported last fall by Columbus Business First. The report also said that a 75,000-square-foot WeWork lease that went sour prior to the pandemic, in the fall of 2019, was a defining reason that the previous owner decided to put the office property on the market; the shared workspace provider spent $5 million to renovate three floors in the asset before stopping its expansion plans following financial fallout late that year.

Dunsmoor told Columbus Business First that that snag “changed their business plan on the asset as Hertz was doing a big roll-up of several properties … They were looking at all of their assets and were saying [that] because [they] lost the WeWork deal, the occupancy just doesn’t check that box. And they wanted to focus on other assets and other markets in a different position.”

He added that if WeWork had signed the lease, 65 East State Street “could have become a long-term hold for [Hertz].” With WeWork’s former space being move-in ready, and with the common area renovations that have been made, Group RMC is expected to market the asset for large-block office leases, Dunsmoor said in November.