The former auto hub will be redeveloped, with S9 Architecture — designer of Empire Stores, Industry City and Ponce City Market — handling the redesign 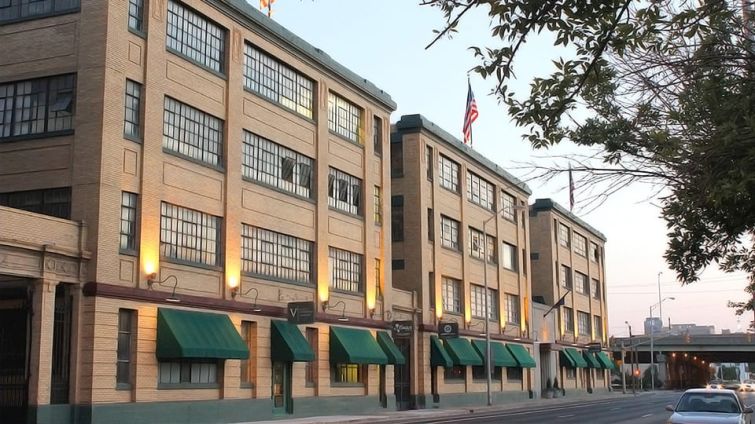 SomeraRoad bought the majority stake off-market, with plans to undergo a gradual, multi-year redevelopment of the former Stutz Motor Car Co. factory, which was originally built in 1911 and served as an auto manufacturing plant for the company until around 1934. The purchase price was not disclosed, but sources said the cost of the first phase of the redevelopment will be around $65 million. This bridge financing from Prime closed on Jan. 28.

Prime Finance was not able to comment or supply additional information prior to publication.

Private local investor, philanthropist and collector Turner Woodard sold his majority stake to SomeraRoad more than a year after the firm had first met with him to discuss its interest in the site, which comprises five four-story structures connected by small bridges. The property — also called The Stutz Business & Arts Center — hosts an artist collective, a bar and restaurant, and a floor that showcases a variety of classic sports and luxury vehicles.

Basel Bataineh, vice president of acquisitions at SomeraRoad, told CO that after the firm first noticed the asset and contacted a local broker for an introduction with Woodard, “[the broker] laughed us off and told us local developers have been trying to buy the building for years and Turner was not a seller.”

SomeraRoad, which has developed a knack for seeking out, acquiring, and redeveloping historic or distressed buildings in secondary markets, including Nashville; Memphis; Pittsburgh; and Kansas City, Mo., was struck by how “architecturally unique and significant [Stutz] was,” Bataineh said. “It’s a beautiful, historic building, and when [we] first saw it, it piqued our interest.”

Near the end of 2019, conversations between Woodard and SomeraRoad were underway, according to Bataineh, who added that the firm “spent six months getting to know him before we finally agreed to a deal to acquire the asset.”

“The time is now, the time is right,” Woodard said in a statement as part of the announcement of the sale. He and his son, Turner John Woodard, held on to a small minority stake and will act as consultants in the redevelopment of the property, which the family bought in 1992. “We have had a lot of success with saving and developing the Stutz Factory over the past 28 years. We made a lot of progress, as downtown has grown up around us, but it’s time to let our new and innovative partners add to and update the factory with modern features and amenities.”

The old automobile manufacturing facility is located at 1060 North Capitol Avenue in a designated Opportunity Zone in the middle of metropolitan Indianapolis. It’s surrounded by health care and laboratory facilities, federal government offices, food and beverage outlets, retail, storage space and public park space. It’s also just a couple of blocks east of the city’s scenic Canal Walk, which branches off the White River and runs north through the middle of the city, parallel to North West Street.

“To us, [it] was screaming for adaptive reuse,” Bataineh said. “It boasts a lot of the things people love to see today — unique architecture, rich history, tall ceilings, large floor plates, incredible loft windows, and indoor and outdoor alleyways running through the factory.”

He added that the layout of the building “wasn’t a surprise when we learned” it was 90 percent or more occupied by a “diverse mix of tenants, including creative agencies, artists, small businesses, design and architecture firms, makers, and more.”

SomeraRoad will partner with S9 Architecture in its adaptive reuse project, Bataineh said, adding that “we knew we had to bring in S9 Architecture to lead the design,” due to the architecture firm’s previous work on Ponce City Market in Atlanta, as well as Industry City and Empire Stores in Brooklyn’s Sunset Park and Dumbo neighborhoods, respectively. “[They brought those projects together] in a thoughtful way that embraces the history and introduces the modern amenities people expect to have today.”

“Our plan is to work closely with existing tenants, [Woodard], the Stutz Artists Association, and surrounding businesses and organizations to create something truly unique and special in Indianapolis, including a museum dedicated to showcasing Turner’s automobile collection,” SomeraRoad Founder and Principal Ian Ross said in a statement.

The company’s adaptive reuse campaign will stretch out over “several years and we intend to hold it long term,” Bataineh said, due in part to “strong tailwinds” for growth in Indianapolis and the city’s “incredible, walkable downtown environment, with well-planned districts and a pedestrian- and bicyclist-friendly streetscape.”

Last August, Indiana University Health revealed plans for a $1.6 billion consolidation and expansion of its operations in Downtown Indianapolis that should be completed by 2026. The new 44-acre campus will be built just south of the IU Health Methodist Hospital, which is located just north of the Stutz development. IU Health Methodist will be renovated and folded into the broader campus, which will include IU Health University Hospital as part of the consolidation.

The city is also home to the National Collegiate Athletic Association (NCAA) headquarters, and with that, it will also host a majority of the games of this year’s NCAA college basketball March Madness tournament due to the pandemic.

The Stutz Factory has made its own unique mark on the city and its downtown area.

According to information about the property from Woodard, auto engineer and designer Harry C. Stutz and partner Henry Campbell’s company, Stutz Motor Car Co., utilized the facility to assemble, paint, inspect, and subsequently test new cars at the Indianapolis Motor Speedway during the city’s golden age for auto manufacturing from 1900 to 1930.

Stutz Motor Car Co. came together after Stutz designed the Stutz Bearcat race car for the nation’s first-ever Indianapolis 500 race. The car gained recognition and led to the founding of the company, according to information from Woodard.

The market for Stutz’s models dried up after the Great Depression; the last vehicle to be manufactured and leave the garage was in 1934 and the company shuttered three years later.

“We have a team that shares [Woodard’s] appreciation for the property’s history and cultural significance,” Ross said in a statement. “We intend to take our time on the redevelopment of the Stutz, ensuring appropriate re-use and long-term success.”