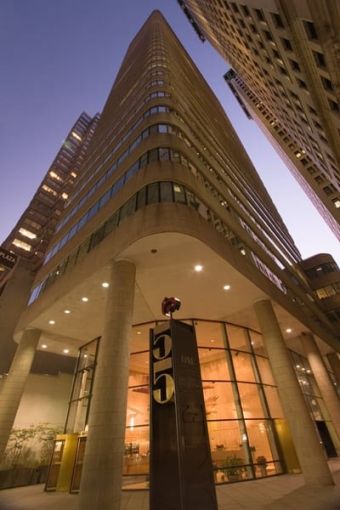 In the largest of the four deals, the Moroccan Consulate took 18,294 square feet to move its offices from 10 East 40th Street to the 32-story 55 Broadway, according to CBRE.

Assurant — which has an office nearby at 28 Liberty Street — signed a new lease for 10,986 square feet in the building between Exchange Alley and Morris Street.

Hannum Feretic Prendergast & Merlino re-upped its 7,071 square feet in 55 Broadway, while Clear Street expanded to a 4,492-square-foot presence in the property, CBRE said.

A spokesperson for CBRE declined to provide the terms of the deals, but said asking rent in the building is $59 per square foot.

CBRE’s Brad Gerla, Jonathan Cope, Caroline Merck and Craig Motola represented the landlord, Harbor Group International, in the deals. Robert Wizenberg, Scott Sloves and Brent Woodruff, also of CBRE, worked on the deal for Assurant. It’s unclear who brokered them for the other tenants.

“We are thrilled to announce the most recent deals at 55 Broadway, a unique, Class A office tower in Downtown Manhattan,” Gerla said in a statement. “While we faced a number of challenges due to the global pandemic, our entire CBRE team was able to work closely with the ownership and the brokerage community to complete these transactions.”

Other tenants in the 358,000-square-foot building include developer RAL Companies, Bank of Communications and software company Syscom USA.