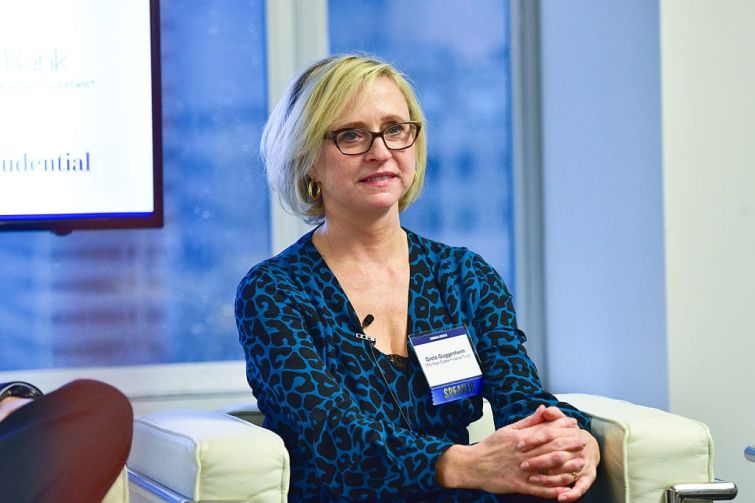 Greta Guggenheim is retiring from her role as CEO of TPG Real Estate Finance Trust (TRTX) on March 31, the company announced late Thursday.

TPG President Matthew Coleman will assume day-to-day responsibility of Guggenheim’s role while the company conducts a search for a new CEO.

“I have been thinking about my retirement for some time, actually since late 2019, after having helped build the company and with the intention of leaving it well positioned for future growth,” Guggenheim said on TRTX’s fourth-quarter earnings call with investors Thursday morning. “This was delayed a bit, but with the strength of our balance sheet restored, out strong liquidity position, and with our experienced management and origination team, I feel now is a good time to move on.”

TRTX grappled with significant liquidity challenges during the COVID-19 pandemic, with Starwood Capital Group providing $325 million to recapitalize the platform in May 2020. Extreme market volatility at the pandemic’s onset forced the nonbank lender to sell off roughly $1 billion in assets in order to meet intensifying margin calls.

Company officials credited Guggenheim with leading the REIT through a successful public offering one year into her tenure and “meaningfully increasing” originations. She noted she will stay on as a senior advisor during the transition period.

The non-bank lender announced fourth-quarter earnings of $14.6 million. Its fourth-quarter revenue was $62 million, and adjusted to $40.6 million when factoring in an incurred interest expense of $21.5 million.

The New York City-based real estate firm received $365.1 million in loan payments last quarter, and $112 million from the extinguishment of a first mortgage loan converted to real estate owned (REO), which caused a total reduction in loan principal balance of $477 million. TRTX also said it took ownership of $99.2 million of two undeveloped commercially-zoned land parcels on the Las Vegas Strip totaling 27 acres as part of a negotiated deed-in-lieu of foreclosure.

In addition to the Las Vegas land loan, TRTX is also addressing a $31.2 million loan on retail property in Woodland Hills, California that defaulted in December. The asset just outside Los Angeles had a loan to value ratio of 63.6 percent, according to TRTX’s earnings statement.

The 28,394-square foot Woodland Hills property located at 20929 Ventura Blvd is anchored by a Valley Country Market, according to LoopNet.

“Neither of these situations came as a surprise to us,” Coleman said.  “We’ve acted quickly and we’re working to maximize the value of each of these investments.

Coleman noted on the earnings call that the company took “quick and decisive steps” in response to turbulence caused by the pandemic including completing exiting $969.8 million of commercial real estate securities and terminating $722.7 million of associated debt. He said TRTX is now positioned to “re-enter the lending market,” and plans to make this its primary business focus.

“We’re actively reviewing nearly three and a half billion dollars of new opportunities and we’re optimistic about transaction volume in 2021,” said Coleman, noting that it recently signed a term sheet for a $50.2 loan for a multifamily property asset in Durham, N.C.

Peter Smith, TPG’s head of originations, said multifamily assets would be a big focus in 2021. The company is estimating originations to be around $2 billion for the year depending on market conditions, according to Coleman. The lending arm typically produces between $2 billion and $3 billion of yearly originations.

TRTX finished 2020 with $319.7 million of cash in hand, $300.6 million of which is available for investment. Loan financing capacity totaled $3.2 billion under secured credit agreements provided by seven lenders. The company said its ability to draw on this capacity hinges on lenders’ willingness to accept loan investments as collateral to secure new borrowings.

Coleman has been an officer of TRTX since its inception and was appointed president in July 2020. He will continue in his role as chief operating officer.