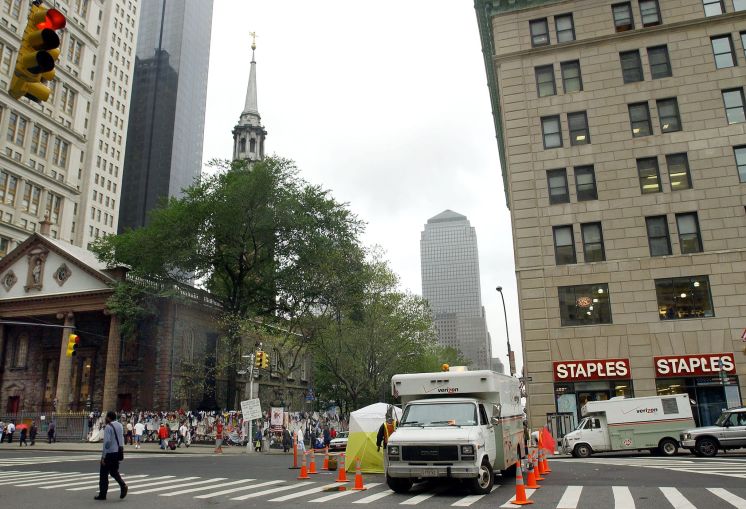 Ubiquitous CVS Pharmacy has leased 19,350 square feet at the Astor Building at 217 Broadway in Lower Manhattan, according to CBRE, which represented building owner Columbus Properties Inc. The pharmacy is replacing part of a shuttered New York Sports Club as gyms across New York City grapple with a pandemic that has clouded their future.

CVS is taking 6,850 square feet on part of the ground floor and a further 12,500 square feet on the second level. The lease involves also taking a portion of a Staples still operating in the building, according to a CBRE spokesperson.

Columbus Properties Inc. acquired 217 Broadway in 1983, and then renovated it extensively, including the addition of a three-story penthouse, according to CBRE. It was originally the site of the Astor Hotel beginning in the early 19th century.

“The retail space at the Astor Building offers amazing visibility with direct sight lines from 1 World Trade Center and the Fulton Transit Center and an incredible branding opportunity, flanked on either side by landmarks such as St. Paul’s Chapel and City Hall,” CBRE’s David LaPierre said in a statement.

The pandemic has not walloped pharmacies as much as other retailers. Officials in markets nationwide considered them essential businesses, so they stayed open through COVID. And chains such as CVS and Walgreens have long served as sites for COVID testing, and are now dispensing coronavirus vaccines, adding that much more foot traffic. CVS, in fact, expects to do as much as $500 million in COVID-related business nationwide this year, according to Bloomberg.

All is not rosy, though. Amazon announced in November 2020 that it was launching Amazon Pharmacy, an online way for Amazon Prime members in particular to have their medications delivered. The service is expected to eat into the business of brick-and-mortar pharmacies, though not as much in dense urban areas like Lower Manhattan.

For gyms, the picture is blurrier. New York building owners, especially those who control office towers, acknowledge the facilities as near-essential amenities for tenants. But, given the fallout from a pathogen spread via bodily droplets, gym memberships and usage have dropped drastically in the past year.