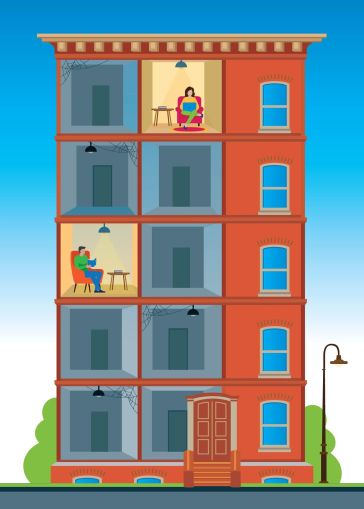 Co-living has struggled during the pandemic, but the sector expects strong growth in the future. Illustration: Tim Webb

Jon Dishotsky got a taste of co-living before the term existed, and quickly came to understand its benefits.

“My dad was a teacher at Stanford, and our family used co-housing early on, because it was a great way for us to have Stanford students live with us [so we could] save on housing costs,” Dishotsky, CEO of the co-living company Starcity, said. “The students got a cheap place to live, my parents got inexpensive child care, and we had bigger brothers and sisters.”

In recent years, the communal and cost-saving aspects of co-living have made it a searingly hot trend. A relatively new industry with fewer than 100 beds nationwide as recently as 2014, according to a November Cushman & Wakefield report, there were more than 7,000 co-living beds in major markets across North America by the end of 2019.

Pointing to the industry’s growth potential, that number rose to nearly 8,000 by the end of the second quarter of 2020, with “over 54,000 beds in various stages of evaluation and development.”

The report explained co-living’s popularity in part by noting that, prior to the COVID crisis, “co-living provided a 30 percent industry average discount to gross housing costs for renters on a per lease basis while increasing NOI for asset owners by an industry average of 15 percent through higher densities.”

In April of 2019, Commercial Observer reported that among the largest co-living companies, Quarters had just raised $300 million with plans for 1,300 new units nationwide, and Ollie was celebrating the success of 169 co-living apartments in Long Island City. HubHaus, meanwhile, had raised $13.4 million over two rounds of funding by 2018, and had more than 1,000 rooms on the market by mid-2019.

By early 2020, many co-living companies reported occupancy rates in the high 90s, and saw unbounded growth on the horizon.

But what a difference a pandemic makes. Quarters has abandoned the U.S. market altogether, Ollie was acquired by Starcity, and HubHaus closed last October. Among the co-living companies still with us, some report occupancy rates diving from those high 90s down to 80 as COVID-19 spread.

The problems with co-living, though, lay beyond the obvious. Asked about companies that failed, some place at least as much blame on the master-lease model, which gave co-living companies total control of (and responsibility for) a building, as they do on anything having to do with COVID.

“We started our first couple of years with master leases,” said Brad Hargreaves, founder and CEO of co-living company Common, which has around 6,000 units under management. “But owners would take our leases to the bank and lenders would say, ‘Why are you master leasing this new multifamily building to a startup? We’re going to charge you a higher interest rate and decrease your loan-to-value.’ So, the owners would come back to us and say, ‘This doesn’t work. We can’t sign the deal if we’re going to get worse permanent financing terms.’”

Common began signing management agreements in 2016, and were using them exclusively by 2018. The company now receives a fee to basically serve as the property manager.

“We came up with the management agreement really as a way to get the lender more comfortable with what we were doing,” Hargreaves said. “It makes a lot of sense. What our master lease was doing was locking the lender into the credit worthiness of our own tenants, and everyone was getting a worse deal as a result. We moved to management agreements very early on, and that’s why we still have a business today.”

Quarters is held up by some as an example of why co-living operators should shun the master lease model. The planning and optimism of their 2019 was gone by the end of 2020, and Quarters left the U.S. market entirely on Jan. 15 of this year with the initiation of Chapter 7 proceedings. The company returned its leases to the landlords, and will be focusing entirely on its European operations moving forward.

“Their model was a master-lease program, where they guaranteed rent to a building owner regardless of occupancy or the rent they collected,” said Susan Tjarksen, a managing director at Cushman & Wakefield. “When you have to pay that amount regardless of what your occupancy level is, that’s a real hit on your balance sheet.”

HubHaus, which announced its closure last September in a letter declaring that the company had “no funds to pay unsecured claims or shareholders,” also used the master-lease model.

But disadvantageous business structures have been just part of co-living’s difficulties, as COVID-19 turned the enticement of communal living and shared amenity spaces into a form of terror. The result was a decrease in occupancy as people fled cities and, according to Cushman & Wakefield, an average drop in co-living effective rents of 9.4 percent from March to August 2020.

“We initially had a big hit to our occupancy, down to about the 80 percent range across the portfolio, where the trailing 12 months saw 95 percent,” Starcity’s Dishotsky said. “People left for three main reasons: they lost a job, they wanted to be closer to family, and hanging out with a lot of people became a bad thing.”

In response, Starcity made changes to its operations in Q2 of last year.

“We completely refactored everything, from virtual events to virtual tours to disinfecting the common spaces on a daily basis,” Dishotsky said. “If somebody got the virus, we quarantined them off-site, and we offered free tests to our residents. We cared deeply about safety and security. That stabilized us in Q2.”

Hargreaves said that Common’s drop in occupancy when COVID hit was under 10 percent. Still, a shift in focus was necessary.

“We had to be really thoughtful with how we shut or kept open shared areas,” Hargreaves said. “You have multiple people sharing a unit, so it may not make sense to shut down all of the common areas, because then people end up congregating in their living room, which is not what we want.

“There were a lot of operational challenges,” he added. “We were able to ramp up cleanings. We had to increase our provisioning of shared goods, things like kitchen and bathroom supplies, because, suddenly, people were there 24/7. Fortunately, most of our management agreements were in partnership with the building owners, working hand in hand to decide how to adjust the price.”

Andrew Collins is the co-founder and CEO of Bungalow, a co-living company founded in 2017 that currently has almost 1,000 properties throughout 12 markets. Bungalow employed the master-lease model for most of their rooms until last October, when they informed some of their landlords they wouldn’t be able to make that month’s rent.

“When we started this company, we looked at what happened over the last 50 years of residential real estate rental data, including in 2008 and 2009. The market that had the largest rental rate drop was Denver, and that drop was 4 percent,” Collins said. “In New York City [for COVID], you saw a minimum 20 percent drop, and, in most cases, that masked a closer to 30 percent drop. It just broke the model. We ate those losses for the first six months, but when it became clear that was no longer sustainable, we went to our homeowners and said, ‘Could you help us? We need to shift toward a percentage of revenue structure.’ It wasn’t a decision we took lightly, but it was one we thought we had to make to ensure our survival.”

With an end to COVID in sight, if still a ways away, co-living operators believe certain precautions and ways of doing business will survive the COVID era.

“A lot has changed for the customer,” Dishotsky said. “Work from home is big, so we’ve increased the internet speeds across all our buildings. People want more desk space in our communal areas, because that has changed into the hybrid office. People also had changes of heart about what they wanted to spend their time on during COVID — a lot of people have gotten back to more creative forms of business. They’re podcasting or video blogging or crafting for side hustles. We want to encourage our residents to be able to do those things, so we’re creating space for that: podcasting studios, craft spaces, video studios, things like that.”

At this point, with occupancy rates rising, there’s an optimism in the industry that the worst of the crisis has passed.

“After Labor Day, we saw occupancy start to stabilize, and then, in November and December, we saw it climb back into the low 90s, and new lease generation return to pre-COVID levels,” Cushman & Wakefield’s Tjarksen said. “Part of that is people waiting for the election to be over, part of it is the vaccine being announced and rolled out, and part of it is the desire of employers to start hiring again. We’re back to pre-COVID inquiries for co-living, occupancies are between 92 and 96 percent nationally, and, for the most part, concessions have burned off.”

The Cushman report is cautiously bullish about co-living’s future, proclaiming that “the road is open for co-living to continue growing into an established part of the multifamily market ecosystem and one that has a place in diversified portfolios.”

Given both the nature of the rental industry and the relative resilience of co-living throughout the COVID crisis, co-living’s leaders agree on seeing a prosperous future on the other side of the COVID divide.

“The market opportunity is massive,” Dishotsky said. “You could see your first hundred-billion-dollar company come out of co-living, because it addresses so much of the market that has been left unaddressed. If you think about airlines, hotels, any other industry, there are these brands that people love, and that just doesn’t exist in rental housing. Ask a hundred people who their favorite landlord is, you know? So, there’s this huge opportunity to say, ‘How do we create a landlord that people love? How do we create a brand that people love?’ That’s a really big opportunity, and I think co-living companies are perfectly situated to do that.”