Landlords and merchants hope for a bounce from arena's partial reopening, but history’s not much of a guide 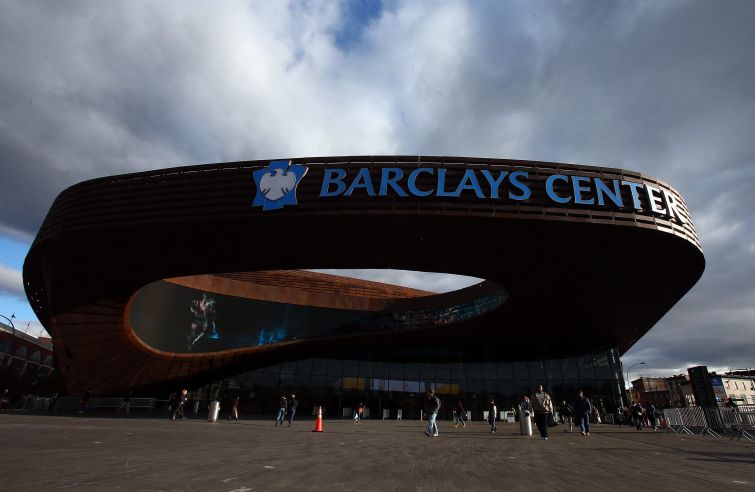 NEW YORK, NY - NOVEMBER 03: A view of the exterior of the Barclays Center on November 3, 2012 in the Brooklyn borough of New York City. NOTE TO USER: User expressly acknowledges and agrees that, by downloading and/or using this photograph, user is consenting to the terms and conditions of the Getty Images License Agreement. (Photo by Elsa/Getty Images) Photo: Getty Images

The planned reopening of the Barclays Center to a limited number of fans on Feb. 23 for the first time in nearly a year renews focus on whether the arena has sparked economic benefits for Brooklyn eight and a half years since its debut.

The sports/entertainment venue will be allowed to welcome 1,773 spectators starting with Tuesday night’s Brooklyn Nets game versus the Sacramento Kings on the heels of New York Gov. Andrew Cuomo’s announcement permitting stadiums and arenas with at least 10,000 seats to accommodate up to 10 percent capacity.

It will mark the first time that the Barclays Center has hosted a Nets game since March 8, 2020, four days before the NCAA’s Atlantic 10 Tournament, scheduled to take place at the arena on March 12, was canceled moments before tipoff as the COVID-19 pandemic swept the nation.

“We are encouraged by this recent news, as it is another step toward a return to normalcy and we believe it will make a difference,” said Ehud Kupperman, director at Madison International Realty and head of the firm’s New York City retail portfolio. “Even at reduced occupancy, we welcome the possibility of having more potential customers make their way to Downtown Brooklyn and look forward to having them shop safely at our properties.”

Kupperman noted that while there has been an impact on Barclays Center businesses from the lack of ticketed events, Downtown Brooklyn has still drawn plenty of foot traffic during the pandemic, due largely to the Atlantic Terminal train station mall. He said that Madison’s properties near the Barclays Center don’t rely on arena volume and view it as an “additive.”

In addition to being the home of the Nets since the 2012-2013 season, the Barclays Center also hosted the NHL’s New York Islanders from 2015 to 2020. The Islanders are currently playing full-time at the Nassau Coliseum in Uniondale, Long Island, and will be opening a new arena at nearby Belmont Park this fall.

Timothy King, a broker and managing partner of Brooklyn-based SVN CPEX Real Estate, said the Barclays Center has boosted some businesses in close proximity of the arena since debuting in 2012, but that establishments a few blocks away have not seen the same benefits. King said that since most Barclays Center visitors travel via subway or the Long Island Rail Road to the Atlantic Terminal stop across the street, businesses outside of that zone see very little volume.

“While there are a small handful of primarily food-and-beverage centers that did benefit to some extent and, in some cases, a significant extent from the arrival of the arena, there are other folks a block or two away where the ship sailed past them,” King said. “It created a lot of activity, but I think it was a little bit like the California Gold Rush, where there were a lot of folks who made a fortune, but there were also many who lost a fortune.”

The Barclays Center rose out of a $4.9 billion, 22-acre Atlantic Yards development project that the former Forest City Ratner Companies first proposed in 2003. It opened nearly a decade later on Sept. 28, 2012, with the first of eight sold-out concerts by Brooklyn-born rapper Jay-Z.

Bruce Ratner, co-founder of Forest City Ratner, purchased the then-New Jersey Nets in 2004 for $300 million as the first step in relocating the NBA franchise to Brooklyn. Ratner’s plans encountered a number of hurdles delaying the arena’s construction. These included opposition from community leaders about the use of eminent domain and the 2008 credit crisis delaying financing.

Russian billionaire Mikhail Prokhorov and his company, Onexim Sports and Entertainment, gained sole control of the Barclays Center through a leasing deal after purchasing the remaining 55 percent stake in the arena from Forest City Enterprises, the parent company of Forest City Ratner. Alibaba Group co-founder Joe Tsai assumed full control of the arena in 2019, when he purchased the remaining 51 percent stake in the Nets from Prokhorov.

Ofer Cohen, founder and president of Prospect Heights-based brokerage TerraCRG, said the Barclays Center opening resulted in nearby properties selling for record prices. Cohen noted that TerraCRG brokered the sale of the retail building at 182 Flatbush Avenue near the arena, for $4.1 million in 2012, and then another deal for it for $7 million in 2019 despite no improvements being made.

Cohen said the creation of additional housing from the overall Atlantic Yards development, now called Pacific Park, has been an overall boom for Brooklyn, spurring new development throughout the borough.

“Their residential units that have added a lot more people to the area that help restaurants regardless of whether there is a game or not,” Cohen said. “There has been a multiplier effect.”

Cohen noted that while the Barclays Center hasn’t hosted any ticketed events in nearly a year, the arena did attract a number of people in the month of June during nightly Black Lives Matter rallies held in the wake of the police killing of George Floyd. The area’s businesses were also aided when the Barclays Center was transformed into a voting center for two weeks in the lead-up to the general election.

Plenty of controversy surrounded the Barclays Center’s development after it was first conceived. Officials, including then-city councilwoman Letitia James, now New York’s attorney general, claimed the project would push out small businesses. The arena has sought to combat those concerns through its “Brooklyn Taste” program, where it partnered with local eateries in promoting their brands with concession stands inside the arena.

“The program has done a lot to help my business and helped me expand,” said Jamar White, founder and CEO of Buffalo Boss Organic Wings & Things, which recently opened a second Brooklyn location and another restaurant in Milwaukee. “It helped introduce the restaurant to those who weren’t aware of it.”

The Barclays Center press office did not respond to requests for comment on the economic impact of the arena on the local community.

Michael Pintchik, president of Pintchik Associates, said his 166 Flatbush Avenue property across from the Barclays Center has seen business hold steady during the pandemic, with a high amount of takeout orders at tenants Shake Shack and Chick-fil-A.

Pintchik, who owns about 60 buildings in the vicinity of the Barclays Center, said that the venue overall has not provided as much economic spark as what was anticipated, since many users go straight into the arena from public transit and do not stick around the area after events. He also noted that area businesses were hurt in the first few years of the Barclays Center being open, since Nets season ticket holders were offered unlimited food options, which has since been de-emphasized.

“What they effectively did was close out the restaurant community at large,” Pintchik said. “In retrospect, it was a relatively unfriendly thing to do, but they had their own reasons since they were competing with Madison Square Garden.”

Post-pandemic, Pintchik is optimistic that his properties will thrive via Barclays Center events, especially as the usually uneven Brooklyn Nets evolve into one of the NBA’s hotter teams behind superstars Kevin Durant, James Harden and Kyrie Irving. He noted that Mexican restaurant Tiny’s Cantina just signed a lease for 229 Flatbush Avenue and was attracted to the location’s proximity to the Barclays Center.

“We’re bullish enough on the area that we are starting some new construction projects on Flatbush Avenue that are within a few blocks of the arena,” Pintchik said. “We believe that the sun is going to come out and support our business activity.”