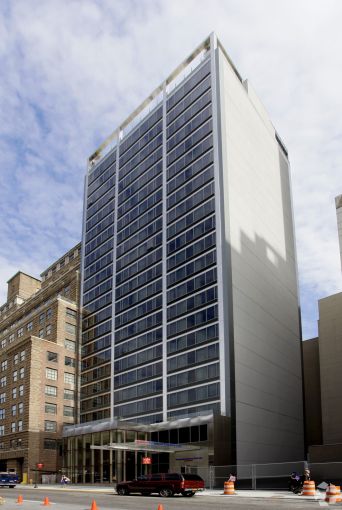 Wells Fargo has kicked off the new year with a little creativity.

The bank was able to sell off its $51 million senior leasehold mortgage secured by the ground under the Marriott Fairfield Inn & Suites at 325 West 33rd Street in Manhattan’s Pennsylvania Plaza to Magna Hospitality, while also providing about $30 million in debt to the buyer to take the collateral off its hands, Commercial Observer has learned.

Magna paid just under $57.4 million to buy the $51 million senior loan and assume control of the 239-key Penn Plaza hotel, which Wells Fargo recently procured via a deed-in-lieu foreclosure proceeding with the mezzanine debt provider and the borrower and previous owner, Hawaii-based The Shidler Group, according to city mortgage records and loan marketing materials reviewed by CO.

Newmark’s Mark Schoenholtz, Larry Wolfe, Jordan Roeschlaub, Dustin Stolly, Adam Etra and Miles Spencer marketed the loan on behalf of Wells Fargo, sources said. Newmark was reached after publication but declined to comment on the details of the transaction.

Terra Hospitality Trust, a ground lease investment entity controlled by Shidler, was listed in city mortgage records as the previous recorded owner of the ground lease (leasehold interest), which commenced on Sept. 26, 2014, following Shidler and Terra’s acquisitions of the hotel and the ground beneath it from OTO Development, a company based in South Carolina. The ground lease has 93 years remaining on its term, according to information reviewed by CO.

The senior loan was first originated in 2015, as part of a roughly $75 million financing package that included the $60 million senior note and a $15 million mezzanine loan, as per city records and the loan marketing materials, which stated that the senior debt initially matured in September 2017 but did not “meet the extension test.”

Eventually, the senior and mezzanine lenders and Shidler agreed to a loan modification and 33-month extension through June 30 last year, with Shidler agreeing to pay down $10 million of the loan package to make it happen. The pay down was split 90 percent and 10 percent between the senior note and the mezz, respectively, which brought the balances of the loans down to roughly $51 million and $14 million.

The 22-story hotel asset, which opened in 2013, is located between Eighth and Ninth Avenues, about a block away from Penn Station within Penn Plaza. It sports the typical hotel amenities one could expect to see within prime Manhattan products, including an expansive lobby, a large dining area with outdoor seating, a business center, a fitness center, boardroom and meeting space, and a rooftop bar with southern and western views of the city and Hudson River.

Shidler acquired the hotel in the fall 2014 for just over $135 million, and then separated the ground lease interest from the fee-simple interest in the hotel, which was placed in a trust on behalf of “an educational institution,” the marketing materials stated.

COVID-19’s impact on 2020 asset-level performance aside, the activity at the hotel steadily grew in the several years leading up to March last year, registering occupancy levels above 92 percent.