EisnerAmper’s Robert Levine On Sustainability and Leaning Into Hybrid 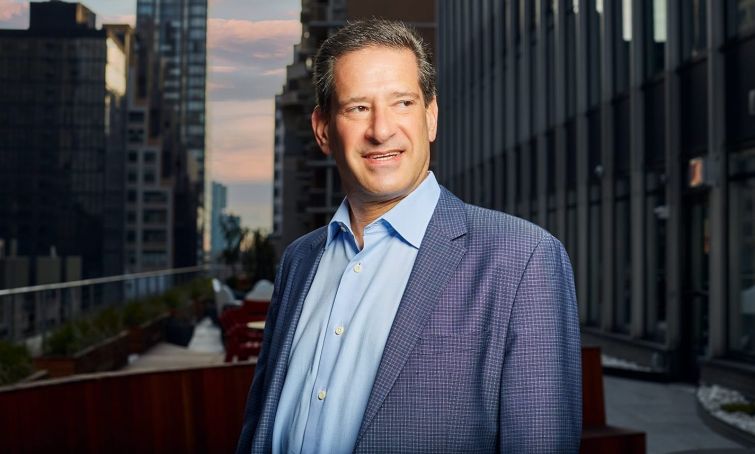 In the accounting world, there is the “Big Four,” known worldwide: Deloitte, Pricewaterhousecoopers, Ernst & Young (which is trying to get everyone to call them EY), and KPMG. Then, there’s the second tier, including Grant Thorton, Baker Tilly, and BDO.

Vault.com ranks EisnerAmper among the 20 most prestigious accounting firms in the U.S. That makes them a tremendous catch for real estate brokers vying to represent their office needs, particularly in New York City, where they are amongst the biggest accountancies.

The firm recently moved its global headquarters across the street, to the Durst Organization’s 733 Third Avenue, at East 46th Street, from 750 Third. The five-floor, 125,000-square-foot space — where 750 of the firm’s 2,000 employees officially work — has all the bells and whistles, from a dedicated entrance to an outdoor terrace. What it doesn’t have are cubicles or even assigned desks. It adheres to the 2020s standard of accommodating an increasingly mobile workforce with places to plug in their laptops.

Robert Levine, the firm’s chief operating officer, described the move as fortuitous. He said the ultra-modern workspace will serve it well when the pandemic is finally over and folks feel free to return to the office — or not.

Levine spoke last week to Commercial Observer about the move and other matters relating to how his firm uses its office space. His remarks have been edited for brevity and clarity.

Commercial Observer: What was the key driver or drivers to building out your new Manhattan office?

Robert Levine: We embarked on a strategic project. We included a good representation of our people, millennials and managers and partners. And we actually started with trying to understand where we wanted to go. We looked at all different neighborhoods in the city. And it turned out we actually liked where we were. And we were thinking about the future.

It’s interesting. Pre-pandemic, we were already recognizing that there was a shift coming in the workplace and the way that we work. And technology was driving that. There were already more people working remotely, working in satellite offices, working at clients. We recognized that on a given day, half of our space was not being used.

So we thought, ‘let’s use our space smarter.’ So, one of the first things we did is decide to move away from dedicated offices, and to plan on using a reservation system. So we can use our space more efficiently, and reinvest some of the space we gave back into amenity space.

Once we get past the pandemic, it’s pretty clear that the future of work is going to be some hybrid combination of people coming into the office and working from home, or working from anywhere.

We designed the space before the pandemic, so it’s not that we knew it at the time. The pandemic is really accelerating what we had already observed.

We thought about collaboration, we thought about flexibility. So many people in our New York City office commute in from Long Island or New Jersey, where we already have other offices. We call it ‘workplace for your day.’

It was also flexible in terms of how we could host events, internal events, market-facing events. The seventh floor has a 5,000-square-foot outdoor terrace. That was actually one of the things we were looking for. We built a big cafe, which was attached to the terrace. We got rid of the traditional vending machines that have candy in them, and instead, we put in a micro-market with healthier foods.

What does sustainability mean in English?

Certainly, some of the materials that we use. Some of the materials were repurposed soda cans. Fishing nets is really one of my favorites. Some of the carpeting was made from reclaimed fishing nets from poor coastal villages. It took fishing nets that were hurting the marine life in the ocean. That material was then reprocessed. The carpet was made from reprocessed plastic. And it also provided economic opportunities for communities that really benefited from that.

Some of it was also around getting rid of paper. So, we scanned in tens of millions of pages of the documents we accumulated over the years, and cut back on the number of printers and copiers. We got rid of paper cups and paper towels, and put in dishwashers and coffee mugs and juice and soda glasses.

I wish I could say that I’m looking forward to the day when we’re utilizing the office because, unfortunately, most people are working remotely, but that’s going to be a significant change. We looked at keyboards for our laptops that don’t use batteries. We were looking at ways to reduce the waste that had to be dealt with.

What was attractive about that location?

I thought we might be interested in moving into what I think of as the commuter triangle between Penn Station, Grand Central and Port Authority, because that’s where so many of our people come into, so we saw it as an opportunity to move into a place which could cut 10 minutes off peoples’ commutes.

But, people came back and what they said was, “we can deal with the extra 10 minutes.” What they really liked about the neighborhood, first of all, is it feels more like a neighborhood. It borders on the residential, and it’s a little bit quieter and a little less fast-paced than the Seventh Avenue corridor, the Broadway area. Downtown was a little too far, from a commuting standpoint.

And what they really liked about the area is that there are really good places, and reasonably priced places, comparatively, for people to go out to lunch, to go grab a drink after work. People could still go to the same pizza place, go to the same place to get a burger. Park in the same place. People appreciated that.

Let’s talk a little bit about EisnerAmper’s global footprint. Where else do you have offices?

Our second-biggest office is in Metropark in Iselin, N.J. We have about 400 folks there. After that would be our Philadelphia office, about 175 people. We have a Long Island office in Syosset. We’ve got a couple of offices in South Florida, including Miami and Broward.

EisnerAmper really comes from a combination of Eisner and a firm called Amper, Politziner & Mattia that merged back in 2010, and both of those firms were entirely in the Northeast. The expansion, since then, has been into places like South Florida, California and Texas.

We serve a lot of different industries, but there are certain niches that are core niches: financial services, for example. That’s why we looked to San Francisco, because there is a big hedge fund market there. Same thing in Dallas. We do a lot of work for high-net-worth individual tax clients, and South Florida is a haven for high-net-worth individuals. Real estate, entertainment and sports, technology companies — those are the niches we are looking to expand.

India, just by chance, joined us as part of the San Francisco firm that joined us. After they joined us, we recognized what a gem that is, and it has grown to be our fourth-biggest office, maybe even our third-biggest office at this point. I think there’s actually more people there than Philadelphia.

How has the pandemic affected EisnerAmper and its use of its offices?

The changes that are happening in the workplace, when things do improve and people are back in the office, we do think it is going to be an acceleration of what was already happening.

When we signed for the new New York office, it was already for about 25 percent less space than our previous lease. We signed this lease in 2019. We’ve actually been able to leverage it even more. We had a terrific firm in the real estate industry in New York City join us about a year ago, and they had 31,000 square feet and they’re joining our office at 733 [Third]. We were already taking less space, and now we’re finding we can use it even more efficiently.

We’ve looked at the changes in two buckets: The first being that, during the pandemic, we refer to that as the “return to office,” while the pandemic and safety is still a concern. That’s one bucket. We’ve encouraged people to stay safe. Our people have been resilient; work is getting done very effectively.

When we think about the second bucket, which is once safety is less of a concern, and we can come back to the office in a more normal sense, what is that going to look like? We think the market for talent is really going to drive the flexibility to continue. The technology has been terrific under stress, and has enabled us to work well remotely.

Our people want to get back to the office. We’re telling them to stay safe. There’s still a lot to figure out. During the pandemic, safety drives us. Post-pandemic, it’s going to be a balance between flexibility and making sure we are addressing the challenges of working remotely. We think it’s going to be some form of a hybrid. Less than 10 percent of our people have been coming into the office.

Why was hot-desking so important to you guys?

It goes back to that study we did, where half the desks were not being used, so the thoughts were that we want to provide our people with more flexibility, to work from where they want to work from. That goes hand-in-hand with hot-desking.

If someone wants to come into the office three days a week, and they’re going to be with a client one day a week and will be in training one day a week, then the other two days, someone else can use that desk. If we can drive the utilization of those workstations up, then we can reinvest the space.

First, you can rent less space, and redirect that rent cost into other things, like technology advances. But even the space itself gives people more flexibility, by having a larger portion of the office be amenity space, or non-reservable space, and collaborative space.

What we did was create something called a flex office, where an office has a desk, but it also has a table that can connect to the desk, and turn it into a huddle room.

Now, nobody owns an office. Partners will have first priority in reserving an office. On a day when a partner is not using an office, in fact, three days before, the office becomes available for directors. And, on the day of, anybody could reserve the office and use it as a huddle room, or use it for themselves. It provides more opportunity, more flexibility, and better utilization of the space in total.