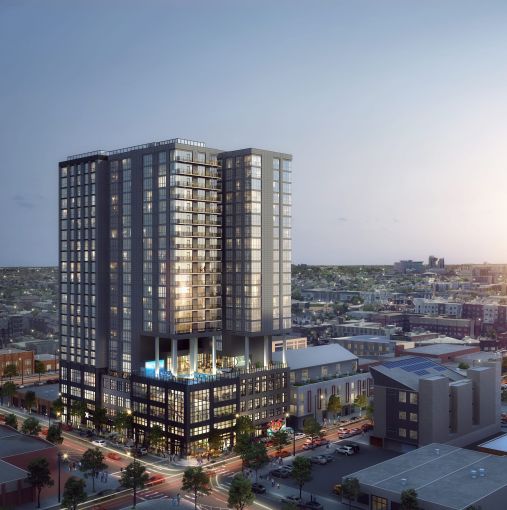 The X Company, a Chicago-based real estate investor and developer, has locked in just over $105 million in construction debt from CIM Group in order to build a 22-story residential development located in the heart of Denver, according to information from advisory firm JLL, which arranged the debt.

The proceeds will go towards The X Company’s X Denver2 (XD2), the second of three “X” branded apartment and co-living developments, totaling 1,529 units, that the firm has in the works in Denver right now, according to the company’s website. XD2 is in line to be completed in the spring 2021.

JLL’s Eric Tupler and Christopher Peck, the co-heads of the firm’s Denver and New York City offices, along with Josh Simon, represented The X Company in the arrangement of the financing.

The 234-unit project will be located at 3000 North Inca Street, next to the firm’s X Denver 1 project and adjacent to a stretch of waterfront city park space that runs along the South Platte River. It’s also situated just a few blocks from Coors Field, the home of Major League Baseball’s Colorado Rockies, and the city’s 140-year-old rail and transportation hub, Union Station, which now sports an array of retail and entertainment offerings, as well as a beehive on the rooftop, interestingly enough.

Along with its private residences and fully-furnished co-living units, it will also feature a three-story “members-only club,” 15,700 square feet of collaborative working space, a pool and deck, a fitness center with daily fitness classes, and an “entertainment lounge” and bar.

The X Company is currently building “X”-branded properties in Houston and in Oakland, which are scheduled to be delivered in the spring 2022 and spring 2021, respectively. Its first and flagship “X”-branded rental building was built in the company’s stomping grounds in Chicago.

The X Company’s CEO Noah Gottlieb in a statement expressed his firm’s excitement for its growing brand of “X” buildings and appreciation for the closing of X Denver2 “in a very challenging year.“

“XD2 is a workspace, gym, neighborhood bar and social network under one roof,” Gottlieb added. “As our third project here in the past two years, XD2 will expand the X offering to our existing members and hopefully welcome a bunch of new ones.”