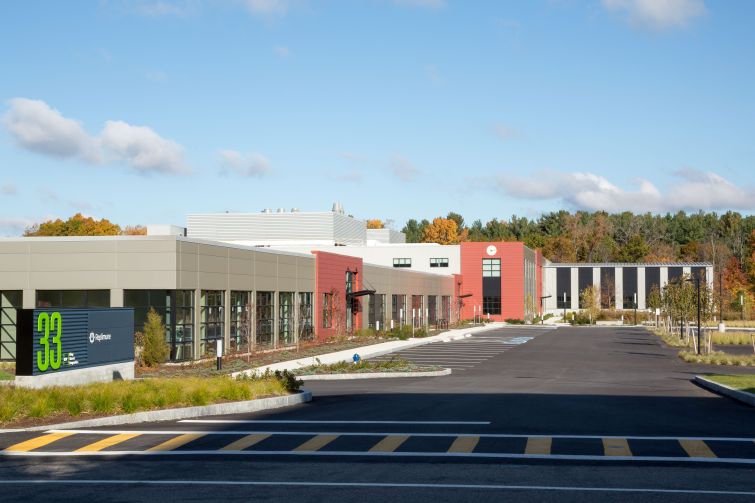 King Street and Carlyle acquired the 91,452-square-foot building at 33 New York Avenue in 2018, converting a former printing facility into a biomanufacturing and R&D space, and expanding the property to 113,527 square feet. In 2018, biotech firm Replimune Group signed a 10-year lease for more than 60 percent of the building. CRISPR Therapeutics took 50,249 square feet at the asset this year.

The buildings at 1 Mountain Road and 5 Mountain Road, located in Framingham Technology Park, were acquired by the partnership in 2019. Biotech company Sanofi Genzyme was the seller and will continue to occupy the buildings for a further 18 months, after which time, King Street has created plans for the asset’s redevelopment into a multi-tenanted R&D lab facility.

“The reason this was the right time to sell is that we completed what we sought out to do,” Michael Gershenson, a partner at Carlyle Group, told CO. “We had a distinct business plan to convert the 33 New York Avenue building to a biomanufacturing facility — which we did, and we fully leased the asset. The other property is two connected buildings. Those buildings were on a short-term sale-leaseback to Sanofi Genzyme, and we completed our redevelopment plan there also.”

“We firmly believe that the demographic-driven demand that brought us to the sector in 2013 — and has propelled us through 11 investments so far — is going to continue to present itself as the reason for us investing in the sector” Gershenson added. “We’re excited about the opportunities ahead.”

“I don’t know that we’ve any secret sauce as such,” Chad Remis, an executive vice president at Oxford Properties, said of the firm’s success. “But we like to consider ourselves as productive buyers, and what I mean by that is, we have the ability to be very creative in our acquisition pursuits. One building is core, biomanufacturing, 12-year lease, good credit quality, great tenancy; and the other is an older lab with a vacating tenant in a year and a half. Typical fund structures prevent two deals of that dichotomy being purchased on one balance sheet. The benefit of Oxford and [Oxford backer Ontario Municipal Employees Retirement System] OMERS is that we have a sole balance sheet that can accrete an investment opinion for both [types of investment].”

The acquisition is part of a bigger push into the life science sector for Oxford.

Remis hails from Boston and returned to live in the city in 2015, which gave him “a bird’s-eye view into what was happening in the life science sector earlier on in its evolution from an asset class perspective,” he said.

“We at Oxford, probably two years ago, took the life science sector out from what we would have otherwise deemed to be an ‘alternatives’ bucket and put it firmly into a category in and of itself,” Remis added. “So, in the same way we think about our North American office exposure, we started thinking about our global life science exposure. We collectively said that we want the life science sector to represent 10 percent of our global balance sheet on a go-forward basis. And that’s a pretty significant statement for a company that, today, is about a $60 billion global business that expects to be $100 billion global business in the time ahead.”

As for the sellers, Carlyle began looking at the life science sector in 2013, while King Street Properties — one of the first firms to enter the space — has been investing in the asset class for almost 20 years, Tom Ragno, founder and principal of King Street, said.

While industry behemoths like BioMed Realty —now owned by Blackstone — and Alexandria Real Estate Equities had the monopoly on the life science space two decades ago, Ragno and his business partner Stephen Lynch discovered a void in the market for entrepreneurial owners.

“We thought it would be a good niche for us, and it’s proven to be so,” Ragno said. “It’s really exceeded what we imagined it could be. That’s largely due to the changes in the scientific world, which didn’t exist 20 years ago and have caused an explosion of demand. I also think what COVID has done is made everybody realize that the work that these companies do has untold value. We all see the economic damage caused by the virus, and companies like Pfizer and Moderna can solve those problems.”

Ragno said he foresees “real growth” in the biomanufacturing space, in particular in Massachusetts. As such, King Street recently kick-started its development of a 45-acre biomanufacturing campus named Pathway in Devens, Mass., which will be fully customizable by its tenants.

With the Framingham deal now under its belt, Oxford is pushing ahead with its expansion in the life science sphere.

“It’s a significant learning curve, but one that we are largely committed to, and one we deem very achievable in terms of our ability to digest,” Remis said. “We build and deploy very significant capabilities across the globe, whether it be at St. John’s Terminal or Hudson Yards in New York, or various asset classes across Canada and the U.S. From double-deck industrial buildings to 50-story office towers, those are unbelievably complicated development projects that we have deep capabilities in, and biotech is equally complicated for different reasons. The engineering required from a core-and-shell perspective is actually meaningfully easier than some of the things that we otherwise do in our day jobs, while the complications and the nuances actually occur in the MEP [mechanical, electrical and plumbing].”

As for New York?

Frank Petz and John Nasca of Colliers International represented the sellers in the transaction.