Partners Gotham Organization, Goldman also committed $70 million in equity to round out the capitalization 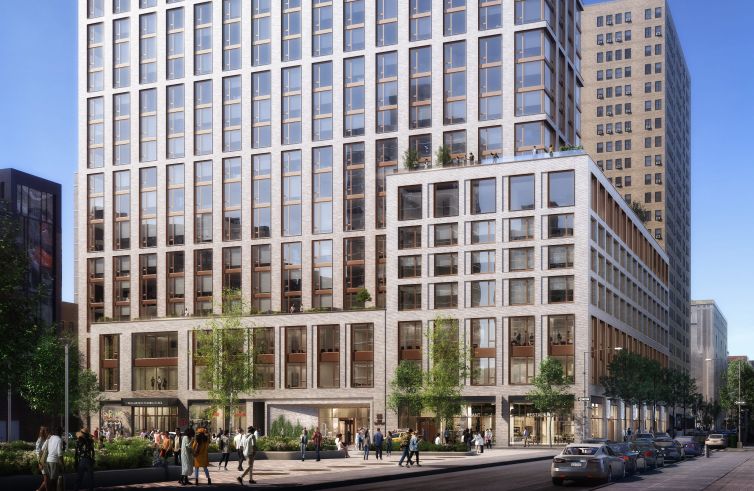 A rendering of the Broome Street Development at 55 Suffolk Street and 64 Norfolk Street. Courtesy: Gotham Organization via Dattner Architects

The Gotham Organization and Goldman Sachs Urban Investment Group joint venture that is spearheading the development of a two-building, mixed-use project at 55 Suffolk Street and 64 Norfolk Street in Manhattan’s Lower East Side has nabbed just under $162.4 million in debt from Wells Fargo and U.S. Bank to move ahead with construction, Commercial Observer has learned.

Together with the construction debt, the joint venture nearly rounded out what is a $235 million capitalization of the roughly 400,000-square-foot project — deemed Broome Street Development — with a $70 million equity commitment, sources said.

Gotham Organization President of Development Bryan Kelly said in a statement that the “completion of this financing, during one of the most economically challenging years in recent memory, is a testament to the strength” of its partnership with Goldman and the motivations of its team and its partners.

The first phase of the project will see the construction of the 30-story, 378-unit, mixed-use residential tower at 55 Suffolk Street, with the second phase — an adjoining affordable housing development addressed at 64 Norfolk — to follow in the spring of 2021. A quarter of 55 Suffolk’s 378 units will be “permanently affordable homes,” sources said. The development will also include nearly 19,000 square feet of retail space, and it will be anchored by the community service non-profit Chinese-American Planning Council (CPC), which has signed on to make the asset its headquarters, occupying 40,000 square feet.

The New York City Department of Housing Preservation and Development (HPD) has granted more than $3 million per year in 9 percent federal low-income housing tax credits (LIHTC) on the second phase of development at 64 Norfolk Street, which will include a 16-story affordable seniors housing building, and a congregation area and “cultural heritage center” for the Beth Hamedrash Hagadol synagogue.

CPC has served the Lower East Side for 50 years, according to the organization’s President and CEO, Wayne Ho, who added in a statement that the project will give the company “the opportunity to continue being a community anchor as we work to promote the social and economic empowerment of Asian American, immigrant, and low-income communities of New York City.” CPC is the largest non-profit in the country servicing Asian Americans, and it has been in partnership with the Gotham Organization since 2016, sources said.

In May, the Broome Street Development partners were able to lock in a needed zoning change for the project, which, as it was initially proposed, would’ve been too large to fit under the previous code that existed.

Margaret Anadu, a managing director and head of Goldman Sachs Urban Investment Group, in a statement, highlighted the importance of public- and private-sector collaboration and community engagement in ensuring that, for years, “this vibrant neighborhood remains a place of opportunity.”