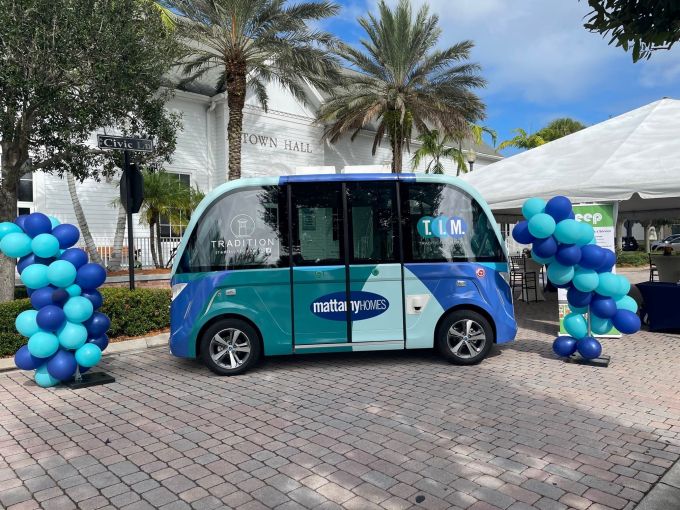 We might not have flying taxis yet, but residents of Tradition, Fla., now have access to a fleet of self-driving shuttles that will connect the community along a 20-mile network.

The shuttles will operate within the 34 square miles of the master-planned community in Port St. Lucie, and link the various Tradition neighborhoods to each other and to the town center, with access points in parks, the local health clinic and other destinations.

“It will connect to the heart of Tradition,” said Dan Grosswald of Mattamy Homes, the developer behind the project. “It’s a reason to go places and do things; more of an old town feel with the most modern tech.”

The nine-passenger vehicles will primarily operate on the Tradition Trail, which is also open to cyclists and pedestrians, but will operate on public roads as well at slower speeds.

The autonomous network at Tradition is among the largest of such systems, and one of the few built by private developers in residential neighborhoods. Until now, most driverless shuttle programs have focused on controlled environments, such as commercial office parks, college campuses, and national parks — and even those are uncommon. In addition, more transportation agencies are experimenting with autonomous shuttles in cities as well, including Columbus, Ohio; Detroit and Denver.

Florida requires all master-planned communities to have a trail network, so parts of the trail infrastructure were already in place, and the rest will be designed with the vehicles in mind. “Tradition Trail is being designed now as an overlay to connect the new areas to some of the more established areas,” said Beep CEO Joe Moye.

Tradition currently has about 4,000 homes with an additional 7,000 lots still available, and while the Town Center is fully built, Mattamy is continuing to develop additional neighborhoods and commercial areas.

While Tradition does cater to older residents and has a dedicated retirement community, alternative modes of transportation are beneficial for all, said Grosswald. “It doesn’t matter if you’re young or old; if you can hop on the vehicle, you don’t have to worry about parking or having a drink, and it’s actually proven to be safer than cars,” he said.

At the moment, the shuttles operate on a fixed, interconnected route, but Moye plans to provide a shuttle-hailing option when the technology is sufficiently advanced. “They’re sophisticated routes, but fixed routes,” he said. “Ultimately, it will be able to navigate much more openly.”

In addition to the ride-hailing, Grosswald said the network could potentially be used for deliveries, or something like Uber Eats, but autonomous. “Those things would all be possible to us. There’s no telling what could happen,” he said.

In addition to private developments like Tradition and Lake Nona, Beep is working with a variety of local, regional and state transportation agencies to pilot autonomous transportation systems in Florida, as well as in several other states. “These groups are looking to evaluate autonomous, first-mile, last-mile routes [that] can be used as an extension of mass transit,” he said.

Beep is also participating in a program by the National Highway Traffic Safety Administration, in which a variety of autonomous transportation companies that are piloting programs throughout the country will share information and tactics.

“We’re trying to balance the demand with realities,” said Moye. “It takes a lot to put these vehicles on the road.”

During COVID, Beep briefly paused its services so it could use its network in Jacksonville to deliver COVID tests instead. While the pandemic proved an ideal test case, moving goods is not currently their focus. “We’re in the people-moving business,” Moye said. “For these vehicles to be repurposed to deliver goods rather than people, that’s something that communities may want to adopt.”

The Beep vehicles began running along their routes for testing on Nov. 22, and will begin accepting passengers on Dec. 11.