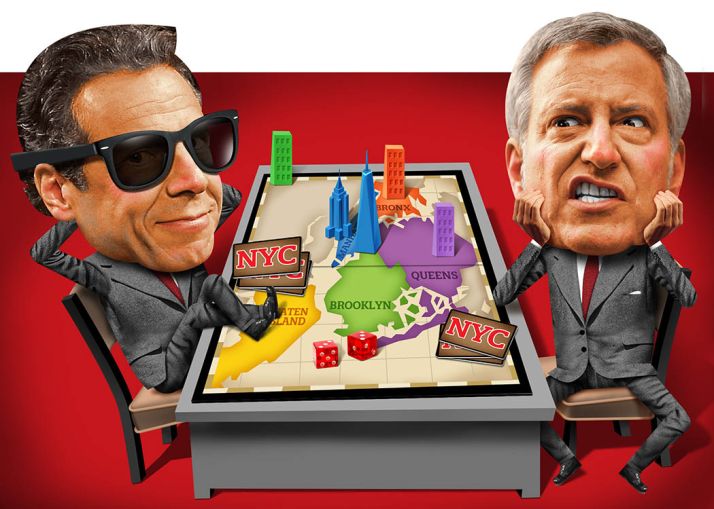 When Mayor Bill de Blasio took office in 2014, he pitched a plan to rezone 15 neighborhoods and build 200,000 affordable apartments as a solution to New York City’s multi-decade housing crisis. Six years into his tenure, the city has hit major roadblocks to passing new rezonings and implementing mandatory inclusionary housing (MIH), which were supposed to be two of the mayor’s banner policies for developing new apartments.

Since 2014, the de Blasio administration has managed to push through eight neighborhood rezonings — East New York in Brooklyn, Bay Street in Staten Island, Jerome Avenue in the Bronx, Far Rockaway in Queens, along with East Harlem, Inwood, and commercial rezonings in Midtown East and the Garment District. Given that he only has two years left in office, it’s unlikely that his administration will be able to rezone seven more swaths of the city. Housing officials like to point out that the city has met its housing unit goals every year, and the mayor’s office has even extended its overall goal to financing and developing 300,000 affordable apartments by 2026.

But the apparent failure to advance rezonings has some people questioning de Blasio’s legacy of housing, planning and development. Politico New York even posited last month that Gov. Andrew Cuomo was leaving a bigger physical mark on the city than the mayor was, because de Blasio hadn’t undertaken the kind of large infrastructure projects that Cuomo and even former mayor Michael Bloomberg used to make a name for themselves as politicians.

“Try to name a signature Bill de Blasio development project, and there’s a good chance you will fail,” wrote reporter Dana Rubinstein. “With the end of his tenure less than two years out, it’s become increasingly clear that he will shepherd into existence neither a magnificent new park, nor a de Blasio-era Utica Avenue subway extension, like he first proposed in 2015.” She also noted that the proposed BQX light rail project on the Brooklyn-Queens waterfront hadn’t advanced much in the past year. And it’s unclear whether new development will ever materialize on top of the massive Queens railyard known as Sunnyside Yards. Cuomo has even gotten in on subsidized housing development in New York City with an initiative called “Vital Brooklyn,” which involves building below-market apartments and healthcare facilities on state-owned hospital land in East Flatbush.

The success of de Blasio’s housing and zoning plan could have been a less flashy version of Bloomberg-era Hudson Yards or Atlantic Yards, but its success seems to have run up against a number of difficult political realities.

Meanwhile, opposition to area-wide upzonings seems to grow with each passing day. Last month, a New York State Supreme Court judge overturned the Inwood rezoning, arguing that the city had failed to consider the displacement of local businesses and low-income tenants in its analysis of the zoning.

Then on January 15, Councilman Rafael Salamanca revealed that he would oppose the proposed Southern Boulevard rezoning, which would affect the heavily Latino, working class neighborhoods of Crotona Park East and Longwood in the South Bronx. He justified his choice by citing a recently released report from activist organization Churches United for Fair Housing: The group analyzed the rezonings of Greenpoint-Williamsburg and Fourth Avenue in Park Slope — which occurred in 2005 and 2003 respectively — and found that both rezonings significantly accelerated the loss of Latino residents from those parts of Brooklyn, even as the number of white residents ballooned.

“While I prioritized downzoning large swaths of my district in order to preserve the neighborhood context of areas that included two and three family homes, the city was intent on upzoning major transportation corridors, of which there are many in the South Bronx,” Salamanca wrote in an op-ed in City Limits. “With this upzoning, I fear that the city could trigger a rush of developers looking to purchase land and build thousands of unregulated units along Southern Boulevard, Westchester Avenue and the Bronx River.”

Another long-planned land-use effort bit the dust earlier this month when the mayor’s office declared it had abandoned plans to rezone 300 blocks of Bushwick. Deputy Mayor Vicki Been rejected a request from local officials to study the Bushwick Community Plan, a zoning blueprint that resulted from five years of planning and meetings with local stakeholders and neighbors. Although the city’s proposal for Bushwick aligned with the community plan in some ways, local Councilmembers Antonio Reynoso and Rafael Espinal refused to sign off on a rezoning that allowed residential development in industrial zones. The pair also opposed upzoning major commercial corridors in Bushwick unless the city was willing to finance 100 percent affordable development in those areas.

“The real problem that the mayor faces is that he’s going to be in office for the next two years and he seems to be unable to put together a political initiative in support of rezonings,” said Eric Kober, a former longtime official at the Department of City Planning. “And that is going to constrain land use in the city. We may be in at least a two-year period in which not a lot of change is going to occur.”

Besides running out of time for new rezonings, the de Blasio administration has struggled to implement mandatory inclusionary housing in an effective way. The policy, which requires developers building on rezoned land to set aside at least a quarter of their units in a new building as below-market, was initially touted by the mayor as a way to lessen the “tale of two cities” in the five boroughs. The idea was to force builders of market-rate housing to include affordable units because they had benefited from either a site-specific or neighborhood rezoning. But the model only works well in higher income neighborhoods, which haven’t been upzoned much during the de Blasio administration.

The mayor defended the MIH program during a radio interview with Brian Lehrer on WNYC last week, calling it “the strongest law in the United States of America to build affordable housing if they want to build their private buildings. But it has to be applied properly … and we have to ensure no developers are sneaking around the rules.” He added that it was “generally the right idea … to create more housing in neighborhoods that are more privileged.”

Many housing policy experts and pro-development activists feel that the planned rezoning of Soho and Noho in Manhattan could offer a watershed moment for the mayor’s office to demonstrate that it’s serious about encouraging affordable housing in expensive parts of the city. Many landlords and residents of the area — which has shifted from rundown artist housing to exorbitantly priced rentals and condominiums over the past 30 years — simply want the city to legalize the existing housing and retail uses there. But pro-growth groups like Open New York feel that allowing dense residential construction, coupled with MIH, in certain parts of the Downtown neighborhoods could produce several hundred units of new affordable housing.

Affordable housing advocates like the Citizens Housing & Planning Council agree. Jessica Katz, the nonprofit’s executive director and a former development official at HPD, said that Soho/Noho “is our chance to prove that we are serious about combating income inequality and providing affordable housing opportunities in all NYC neighborhoods. This is where the rubber meets the road for the Mayor’s agenda to make NYC the fairest big city in America.”

During the Brian Lehrer interview, the mayor hedged on adding affordable housing to the Soho/Noho rezoning, saying that he wanted to see what policies would have support during the ULURP process. (The City Hall press office didn’t immediately respond to a request for comment.)

Kober noted that “it’s important to establish the principle that wealthy neighborhoods can be rezoned. And particularly in Noho there are several lots that are non-contributing to the historic districts or that have apartment buildings on them — and those [lots and] buildings could easily be mixed income buildings.”

The former planner recently took aim at the de Blasio administration’s land use strategy in a policy paper published by the Manhattan Institute. He argued that the city needs to rezone the manufacturing zones in Manhattan, which include Soho, Noho and parts of Midtown South, as well as the swaths of East Williamsburg, Gowanus and Long Island City that no longer “have an industrial character.”

Gowanus is set to be rezoned by the city, but the planning process has been slow-walked for years by the mayor, who still owns a home in nearby Park Slope, and City Councilmember Brad Lander. Kober also felt that the city should have control over its own tax abatements and exemptions, which would allow it to more easily modify tax abatement programs like 421a that help drive new construction of market-rate and affordable apartments in weaker housing markets. He noted that MIH would be more heavily used if 421a were a more flexible program; it could encourage off-site affordable housing, affordable units with condominium projects, and even affordable units as part of a commercial-to-residential conversion.

Tom Waters, a housing policy analyst at the nonprofit Community Service Society of New York, also felt that the city needed to rezone higher-income neighborhoods. But he also emphasized that the city should be building and financing more low-income housing, in addition to requiring developers to do so as part of MIH.

“[The city] has raised the share of extremely low-income units [in MIH], but it’s still pretty low, 10 percent,” he explained. Poor neighborhoods still feel that they are not served by the mayor’s housing plan and will keep opposing rezonings until MIH and similar programs serve more truly low-income New Yorkers, said Waters. Even so, he acknowledged that the mayor’s office had put itself in a difficult political position with the neighborhood rezonings, MIH and low-income housing development.

“They did oversell mandatory inclusionary housing,” said Waters. “[Former Deputy Mayor] Alicia Glen kept saying, ‘We don’t need more low-income housing, we need more housing in the middle,’ while HPD was doing low income housing. Why didn’t they take credit for that instead of arguing against it?”