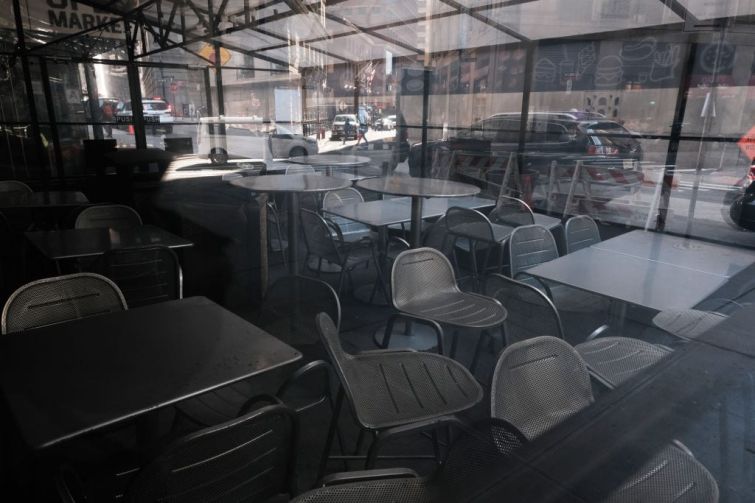 An Italian restaurant in Queens sued the city and state to force the return of indoor dining. Photo: Spencer Platt/Getty Images

An Italian restaurant in Queens launched a $2 billion class-action lawsuit against the city and state to force the return of indoor dining in New York City after it was indefinitely postponed last month as coronavirus cases spiked around the country, court documents show.

Il Bacco, an Italian restaurant in Little Neck, Queens, filed the suit on Friday night in Manhattan Supreme Court against Gov. Andrew Cuomo and Mayor Bill de Blasio over the decision to halt indoor dining in mid-March. In it, Il Bacco complained that even though it sits a block away from the Long Island border, which resumed indoor dining in June, it hasn’t been allowed to bring back diners inside.

“Plaintiff is losing all of its customers to restaurants in Nassau County and is suffering irreparable harm as a result,” the suit, filed Friday night in Manhattan Supreme Court, claims. “There is absolutely no science that will prove that indoor dining is safer one city block east from plaintiff’s restaurant.”

The suit, which was first reported by Crain’s New York Business, is asking the city and state to immediately bring back indoor dining and stop Cuomo from banning indoor dining again, and is seeking $2 billion in damages. It does not say how many other restaurateurs signed on but said there are “several hundred members” in the class-action claim.

Il Bacco’s lawyer, James Mermigis, did not immediately respond to a request for comment. A spokesman for de Blasio declined to comment on pending litigation.

“The bottom line is that New York City was hit the hardest and the governor took action to reduce infections in the areas that were driving clusters in other large cities around the country,” Rich Azzopardi, a senior adviser for Cuomo, said in a statement. “We understand that some people are unhappy, but better unhappy than sick or worse.”

Restaurants around the city were forced to switch to take-out or delivery only models since March 16 as officials rushed to curb the spread of the coronavirus, which has been responsible for nearly 27,000 deaths in New York City.

Eateries laid off about 200,000 workers while struggling to keep the lights on, with a survey by the New York City Hospitality Alliance finding that more than 80 percent couldn’t pay their full rent in July. Thousands of restaurants are expected to close in the wake of the pandemic.

New York allowed for the expansion of outdoor dining in recent months as coronavirus cases dropped and was originally set to bring back indoor dining in the city on July 6, but postponed as other states saw increases in cases.

Officials have not given a concrete date on when indoor dining could return, but de Blasio has hinted it might not come back until 2021 because it’s considered high-risk.

“If folks miss the theater, if they miss indoor dining, those things will be back,” de Blasio said at a press conference last week, according to Eater New York. “They’ll be back next year at some point. I think that is overwhelmingly the case.”

Last week, restaurant owners in the five boroughs pleaded with the local government to develop a plan for indoor dining’s return, with the New York City Hospitality Alliance considering legal action to force the return. A group of 100 restaurant owners in Staten Island and Brooklyn later announced plans to file a class-action suit to resume indoor dining, The New York Post reported.

Il Bacco’s suit isn’t the first time Mermigis has tussled with the city and state over lifting coronavirus restrictions. Last month, he filed a class-action lawsuit against New York on behalf of about 1,500 gyms to allow them to reopen, NY1 reported. Gyms are now set to return on Wednesday.