A Clippers-run firm will purchase the property within the arena site for $66.25 million

While the Los Angeles Clippers are currently battling to make it to the Western Conference Finals in the NBA bubble in Orlando, their franchise is on the path to a new home in Inglewood.

IBEC will include an 18,000-seat basketball arena, team practice facility and corporate offices for the Clippers. The project, expected to break ground next summer, will open for the start of the 2024-25 NBA season, after their lease expires with the Staples Center in Downtown L.A. The Clippers are considered the third tenant at Staples, behind the L.A. Lakers and the L.A. Kings hockey team.

The $1.8 billion project will be funded by Clippers’ owner Steve Ballmer. The arena complex would occupy much of that land, just east of LAX, near the intersection of West Century Boulevard and South Prairie Avenue.

IBEC is expected to generate an estimated $260 million per year in economic activity for Inglewood, and approximately $100 million in tax revenue over the first 15 years of operation.

“Today is a new chapter for the Inglewood Basketball and Entertainment Center, as we move from the land-use entitlement process and look toward construction,” Gillian Zucker, Clippers president of business operations, said in a statement.

The future development had been the target of several appeals and bitter lawsuits, including from MSG — and community groups backed by MSG — which is run by James Dolan, the owner of the New York Knicks. MSG previously owned both the Forum arena about a half-mile from where IBEC is set to rise, as well as a long-term lease deal for the property where IBEC will be.

MSG fought the project after alleging that Inglewood Mayor James Butts tricked the company into ending its lease so the city could use it for a technology park — not a competing arena. The mayor has repeatedly denied the allegations. MSG claimed the city violated an agreement that bars a competing property so close to the Forum after MSG invested $100 million to renovate the Forum for concerts and performances.

MSG had purchased the Forum at 3900 West Manchester Boulevard for $23.5 million about nine years ago. It was the home of the L.A. Lakers until 1999. Then earlier this year, MSG sold the Forum to Ballmer for $400 million, putting an end to the lawsuits filed by MSG.

IBEC will also notably be about a half-mile from the $5 billion Hollywood Park development. That mega-project spans 300 acres, and includes the 70,000-seat SoFi Stadium, where the L.A. Rams and the L.A. Chargers will play this NFL season; 2,500 residential units; 900,000 square feet of retail space; 800,000 square feet of office space; a 300-room luxury hotel; and a 6,000-seat performance art venue.

Inglewood has been experiencing a development and economic boom since the Rams and Chargers announced plans to move there, sparking a wave of investment across property types, and spurring higher land prices and average rents. But the city’s growth hasn’t come easy, with many residents and businesses reportedly being priced out. About two-thirds of the city’s residents rent their homes, and some landlords have imposed steep rent hikes, forcing the city to step in last year with rent control measures. 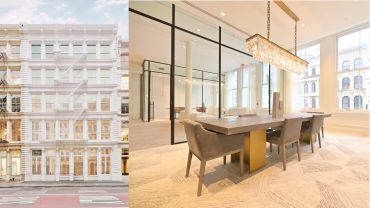