Online lender SoFi signs a 20-year deal for naming rights to the Rams and Chargers stadium, which is expected to open next summer 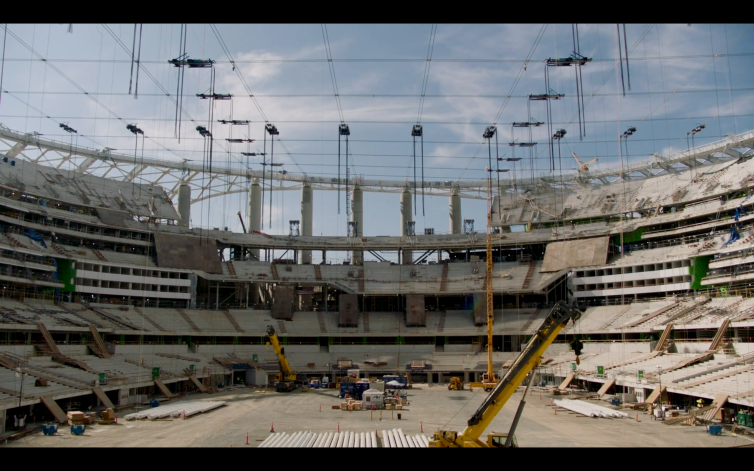 With less than 12 months before kickoff for the 2020 NFL season, Stan Kroenke has the whole nine yards and a name to go with his football stadium in Inglewood.

Online lender SoFi Lending Corp. has secured the naming rights and a 20-year deal with the Rams and Chargers, according to the Los Angeles Business Journal. The firm agreed to pay around $20 million per year, reports say.

SoFi Stadium, which will be the largest in the NFL, is the centerpiece to the much larger $5 billion Hollywood Park project developed by Rams owner and chairman E. Stanley Kroenke. Construction is 75 percent complete, and the stadium is expected to open next summer for other events before the NFL preseason begins in August 2020.

The remaining construction includes the glass roof, which is expected to be completed by January, according to Jason Gannon, managing director of the Los Angeles Stadium & Entertainment District at Hollywood Park.

It is being constructed by AECOM and Turner Construction Co., and designed by HKS Architects, which was behind the stadium developments for the Dallas Cowboys and Minnesota Vikings.

The project has spurred millions of dollars in new real estate investments and development over the past five years. The Forum arena was also renovated in 2014, the Clippers are planning to build a new 900,000-square-foot basketball stadium, and architect Frank Gehry is transforming an 18,000-square-foot bank property into a new home for the L.A. Philharmonic’s youth orchestra.

Last October, Inglewood Mayor James Butts told the Commercial Observer, “the only thing that’s changed about Inglewood is everything.”

But there have been growing pains, as the cost of living is on the rise which has ignited gentrification wars. Many residents and businesses have been priced out, according to media reports.

About two-thirds of the city’s residents are renters, and some landlords have more than doubled their rents. In the summer, the city approved a 5 percent rent control measure, similar to other smaller municipalities in the county after Proposition 10 failed last November.