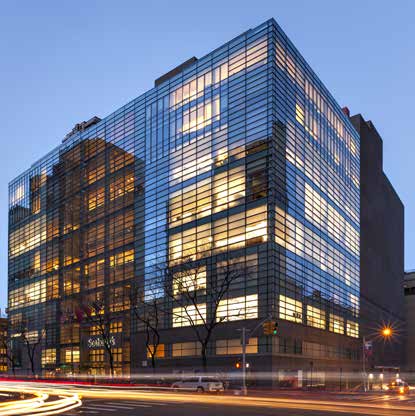 Significant loan closings have been few and far between since COVID-19 hit, but Barclays just wrapped one “artfully.”

The lender closed a $483 million, five-year, floating-rate loan for Sotheby’s headquarters at 1334 York Avenue on the Upper East Side today, Commercial Observer has learned.

CO first reported in March that Barclays had been lined up to lead the $650 million refinance. A mezz lender is also in the mix, although the lender’s identity and the loan amount couldn’t immediately be ascertained.

The 10-story 506,000-square-foot owner-occupied  building has served as the Sotheby’s headquarters since 1980 and is home to the company’s sole North American auction salesroom. Located between 71st and 72nd Streets, the building includes distinguished art gallery, auction, and office space as well as Sotheby’s Wine and Sant Ambroeus Coffee Bar on the ground floor.

“Sotheby’s is a world-renowned brand representing the gold standard in its business,” Stolly said.”The building is of trophy quality. Its proximity to several hospital systems nearby offers unique additional demand for medical and life science use. We were able to clearly illustrate this to lenders which helped mortgage and mezzanine lenders feel especially comfortable with the investment in the post-Covid world.”

“Seeing this deal through during the challenging environment is a testament to the perseverance of the Sotheby’s, Barclays and Newmark teams, respectively,” Roeschlaub added. “We expect to have the mezzanine portion of the financing close in the near term as well.”

In 2000, the building underwent a full-scale redevelopment. Six stories were added — elevating the structure’s height to 10 floors — and its interior was gut-renovated. Three years later, Sotheby’s entered into a sale-leaseback agreement with then-owner RFR Holding, before eventually reacquiring the property in 2009.

In February 2019, Sotheby’s announced a $55 million expansion and redesign of the asset, designed by OMA New York. The redevelopment increased the building’s exhibition space from 67,000 square feet to more than 90,000 square feet, as reported by 6sqft.

And in June 2019, it was announced that French-Israeli media mogul and art collector Patrick Drahi would acquire Sotheby’s through his company BidFair USA for around $2.7 billion.

Barclays’ financing retires previous debt on the trophy asset, including a $252 million BNP Paribas loan from October 2019. In 2015 HSBC also provided a $325 million package to retire the $235 million Bank of America mortgage that Sotheby’s used to repurchase its headquarters in 2009.