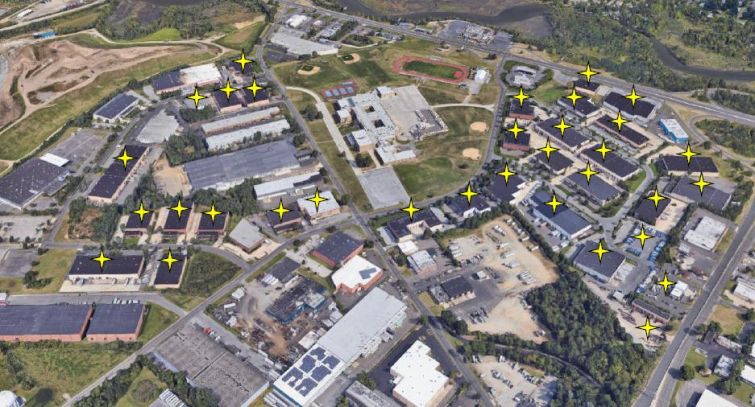 An aerial view of the Twinbridge and Twinbridge West parks and their 32 buildings. Courtesy: W&D

Jason Hernandez Nuveen Real Estate’s head of originations for the Americas told CO that because the pandemic has sent the banking world mostly to the sidelines, it’s opened the door for a debt fund operation such as his.

“Six months ago, this would’ve been a bank deal, not a debt fund deal,” Hernandez told CO. “Banks have moved out of market, so debt funds can price this deal today. We look at this as a core deal — it will be in our core account — so if the market comes back, we can finance this and get a nice return. We’ve seen a handful of these opportunities recently, and we understand the markets are fluid; this will trade away from us when banks come back and spreads compress. The market’s uncertain and challenging, and candidly, it’s not very transparent. So, our view is we’re going to find credits we like and we’re going to lean into those with great, institutional sponsors.

“Given the uncertainty [that exists in the market], we’re bullish on industrial and housing,” Hernandez added.

Walker & Dunlop’s New York-based debt and equity advisory team, led by Aaron Appel, Keith Kurland, Jonathan and Adam Schwartz and including Mo Beler, Ari Hirt and Triston Stegall sourced and arranged the debt financing on behalf of the joint venture. Wharton president Peter Lewis praised W&D’s “exceptional acuity and attentiveness to the market” and said that having such a partner is critical, “especially during these challenging times.” The financing closed on July 31.

Colliers International announced earlier this week that the firm’s Ian Richman and Marc Isdaner brokered the sale of the properties, which together are fully leased to 49 tenants, including Nestlé Waters — the water division of Swiss food and beverage company Nestlé — Israeli consumer home carbonation manufacturing company SodaStream (whose parent company is PepsiCo, which bought the manufacturer in 2018) and well known telecommunications company Sprint, sources said. Colliers will also stay on to handle leasing and management duties.

“We are extremely excited to be acquiring this special portfolio which has a heritage of excellence cultivated by The Bloom Organization over the years,” Lewis said in a statement as part of the sale announcement. “We are fully committed to following in their footsteps by providing a superior product and level of service.”

The site comprises 32 buildings split across the Twinbridge Industrial Park and the Veterans Industrial Park — which will be renamed Twinbridge West — at 8500 Remington Avenue in Pennsauken, N.J., just southwest of Trenton and just a few miles and across the Delaware River from Philadelphia. Both were constructed by The Bloom Organization in the 1980s, and they were finished in the 1990s, according to Colliers’ announcement; there are single- and multi-tenanted buildings on site, which feature drive-in, grade-level loading doors, rather than docks, as well as 21-foot ceiling heights. Wharton is also planning to renovate the site’s common areas and landscaping and refresh the signage, as per Colliers.