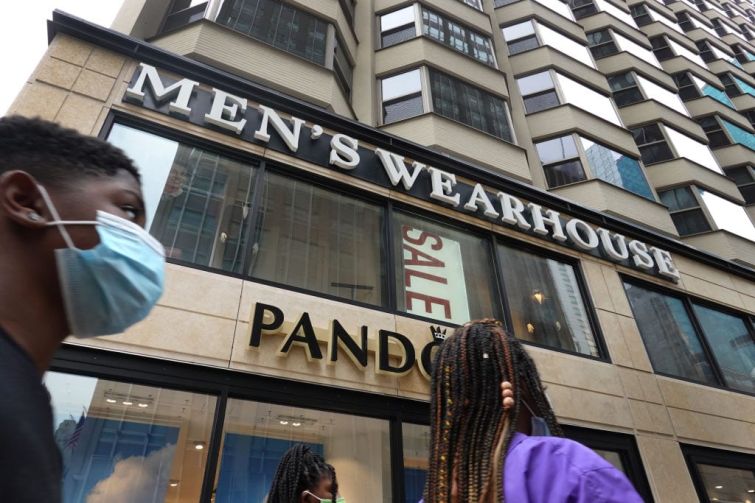 Suit retailer Men’s Wearhouse and Lord & Taylor, one of the country’s oldest department stores, became the latest economic victims of the coronavirus pandemic with both their parent companies filing for bankruptcy over the weekend.

Lord & Taylor filed for Chapter 11 in a Virginia court on Sunday with both its assets and liabilities listed at between $100 million to $500 million, less than a year after clothing rental start-up Le Tote bought the retailer, according to court records.

The department store — which was founded in 1826 — plans to look for a buyer, according to a note posted on its website.

“We will continue to offer our superior service and value in-store and during the Chapter 11 case,” the note read.

A spokesperson for Le Tote did not immediately respond to a request for comment, and it’s unclear if it plans to close any of Lord & Taylor’s 38 stores as part of the bankruptcy.

Also on Sunday, Tailored Brands — the parent company of Men’s Wearhouse, JoS A. Bank, Moores Clothing for Men and K&G Fashion Superstore — filed for Chapter 11 in a Texas court.

Tailored Brands has about $1.4 billion in debt, which it plans to pare down by $630 million during the proceedings. It also received $500 million in financing from its lender to continue operations.

“We have made significant progress in refining our assortments, strengthening our omnichannel offering, and evolving our marketing channel and creative mix,” Dinesh Lathi, the president and CEO of Tailored Brands, said in a statement. “However, the unprecedented impact of Covid-19 requires us to further adapt and evolve. Reaching an agreement with our lenders represents a critical milestone toward our goal of becoming a stronger company that has the financial and operational flexibility to compete and win in the rapidly evolving retail environment.”

The pandemic battered retail sales across the country in March and April, with April seeing the worst decrease on record as states around the country implemented strict stay-at-home measures to contain the virus. The measures forced many retailers to temporarily shutter.

J.Crew, JCPenney, Aldo, True Religion, John Varvatos, GNC, Muju and Brooks Brothers, among others, have all filed for bankruptcy in recent months.

Last month, Neiman Marcus, which filed for Chapter 11 in May, announced it would close its 188,000-square-foot Hudson Yards store a little more than a year after it opened as part of the proceedings. The space will be converted to office use.

Retail sales bounced back better than expected in May and June, but as Covid-19 cases spike around the country the recovery could be short-lived.

Lord & Taylor was already struggling to survive, selling off its flagship Manhattan store, when the San Francisco-based Le Tote stepped in in August 2018 and bought it from Hudson’s Bay Company for $100 million. Retail experts previously told Commercial Observer that that would have been a “laughable” number for the company a decade ago.

However, the start-up failed to turn around the struggling retailer as the pandemic forced it to close locations in mid-March. In April, Le Tote started “significant” layoffs for employees in both Lord & Taylor and Le Tote, Retail Dive reported.

Men’s Wearhouse was also in trouble after it acquired JoS A. Bank in 2014, forming Tailored Brands. The move failed to increase sales and instead hampered the newly created company with debt, The New York Times reported.

Like many other retailers, the pandemic exacerbated Tailored Brands problems, and its bankruptcy filing came days after the company announced it would close up to 500 of its 1,400 stores and lay off 20 percent of its workforce.