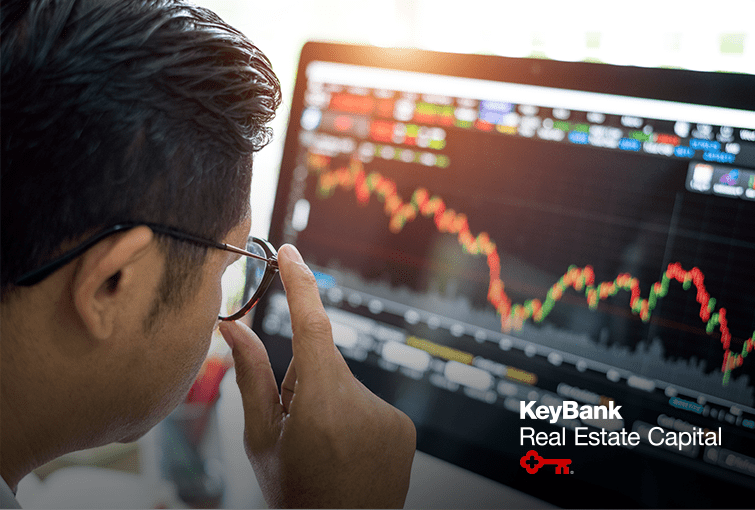 Despite the dramatic job losses and business decline following March stay-at-home orders across the country, actions by the federal government have enabled the capital markets to carry on—albeit with lower deal volume than in early 2020. To discuss the impact of the novel coronavirus pandemic, KeyBank Real Estate Capital’s (KBREC) Daniel J. Baker, Head of Commercial Mortgage, joined a panel of industry experts in a recent Real Estate Journals webinar.

Multifamily Data Has Some Bright Spots Amid Turmoil

Reviewing current conditions, panelists agreed that the capital markets have been very active because of low interest rates and favorable spreads. KBREC has been engaging with its asset management clients and pursuing numerous new originations.

Across the board, most asset classes performed better than expected in April and May, observed one panelist. Liquidity in the debt markets was a concern, but has begun to thaw. Regional and local banks have been very visible in the marketplace, while life insurance companies are being highly selective and focusing on their best customers.

Given the decline in business and consumer travel and entertainment, much hospitality and retail debt is in forbearance. Some will move into workouts or revert to the lenders within two or three months, predicts some on the panel.

If a property lacks a grocery store anchor, mortgage brokers must be resourceful and turn over every stone. For example, one firm recently closed a $24 million shopping center transaction in which the lender was a tenant in the property.

On the positive side, core properties with long average lease terms are attracting the most private capital. Assets that were under contract before the stay-at-home orders and business disruption occurred have, for the most part, continued to close at their pre-pandemic prices, although deal volume and velocity are down.

Industrial properties have continued to perform well, with strong cash flows for underwriting. However, lenders are avoiding airport and port co-location properties on the expectation that trade will decline significantly, making it difficult to secure loan bids.

For the right projects, lenders are available and interest rates and spreads are attractive. One panelist cited several recently closed loans in the $20 million to $40 million range and funded by four completely unfamiliar credit unions and regional banks offering very attractive rates and terms.

Where the current situation differs from the global financial crisis of 2009 is the hemorrhaging in the hospitality and retail sectors, as well as the $300 billion to $400 billion of equity capital in the market right now. In 2009, hotels and retailers weren’t necessarily missing rent payments, but liquidity had evaporated.

Another difference, noted one panelist, is that in 2009 retail landlords wanted national credit tenants. Today, some of the largest retailers have been requesting – and receiving – concessions. Mom-and-pop retailers, in contrast, are paying their rents to remain ready for business.

From KBREC’s perspective, another noteworthy difference is that pre-pandemic underwriting across the board was much more responsible than in 2008-2009, so the CMBS market was less “frothy.” Most lenders were quick to establish a 90-day forbearance and are likely to restructure some debt in the next 90 days. As CMBS returns, KBREC completed multiple securitizations in June alone, albeit with smaller pools than in the past.

When business activity came crashing to a halt in March, the Federal Reserve made the historic announcement that it would purchase CMBS—including multifamily CMBS—issued by the government-sponsored entities. As a result, the multifamily sector avoided a liquidity crisis and interest rate spreads tightened.

Spreads for multifamily debt range between 250 and 350 basis points, depending on the dynamics of the deal, noted one panelist. Capital is plentiful, although in some instances agencies are asking for six to 12 months of reserves for principal, taxes and insurance.

KBREC has also been actively originating loans, but with added due diligence. KBREC bankers have been seeking details of borrower rent rolls and how many tenants have been furloughed. However, today’s low interest rates and interest reserve requirements could enable an owner to cover debt service even with as little as 65% occupancy. And, while it seems that the multifamily market should be in worse shape than it is, collections continue to be strong.

While the office sector has been less active than multifamily, many life insurance companies and banks continue to lend to office borrowers. Despite the move to remote work by most companies this spring, office tenants tend to have long-term leases that support underwriting, noted the panel. Supporting this view, one firm had just closed several office transactions—including one for approximately $100 million and another in excess of $200 million, both with strong tenants.

Questions persist about the post-pandemic office market. While vacancies clearly will rise in the next year, the panel did not anticipate a long-term decline in office occupancy. In the short term, the need for social distancing space will balance out greater adoption of remote working. In the long term, there is consensus that companies need the office to foster a shared culture, in-person collaboration and productivity.

Capital is available for many deals, but price discovery will be ongoing for some time, noted the panel. Cashflow durability is a challenging question: will federal stimulus keep rent rolls alive?

As markets have re-emerged in such countries as China, Germany, Korea and Japan, the price differential for core products with cashflow durability before and after the stay-at-home orders is 0% to 5%. For value-add products, the differential is more like 10% to 15%, or even 15% to 25% if the project needs significant capital.

In another panelists’ view, borrowers should be patient because things will probably get worse. Price discovery could continue into third or fourth quarter, and sellers could take even longer to become realistic about pricing.

For loan servicers, hospitality and retail properties have been the first to require workouts. Life insurance companies lack a uniform approach, which means all-hands-on-deck servicing teams are investing significant time to address each loan on a case-by-case basis, according to one panelist.

With forbearance coming to an end in the near future, however, lenders’ responses will depend on the asset type and borrower specifics. Given that hotels are operating businesses, for example, lenders are unlikely to want to own them and will instead work with borrowers as best they can.

Despite the signs of life in the markets, listeners heard caution from the panel against a false sense of security based on the liquidity provided by the Federal Reserve. While the banking system is much better capitalized now than in 2008, the lack of a second stimulus bill could jeopardize liquidity and lead to a landslide of defaults in consumer debt.

Combined with the presidential election, the lack of additional federal stimulus could lead to very skittish CRE investors in the fall. While it is predicted that Congress will approve additional stimulus because it is an election year, another possibility is that Congress will point to a rising Dow-Jones Index and business re-openings as reasons to avoid further action.

The financial markets will be incredibly challenging over the next six to 12 months, but those who stay focused, work hard and are creative could emerge in a stronger position than before the pandemic. As difficult as the global financial crisis was, many successful firms, intermediaries, developers and entrepreneurs arose from that catastrophic era.

Moving forward, KBREC’s view is that a borrower’s approach with their lender can go a long way toward managing through difficult times. Relationships are more important than ever in the current environment, and the right financial advisor can be critical in gaining access to capital and closing deals.

To learn more, contact your KBREC Mortgage Banker, or reach out directly to Dan Baker.