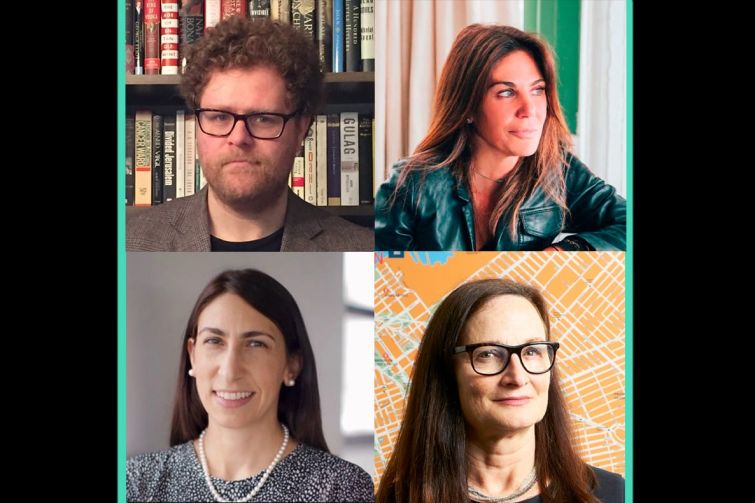 Employees may be nervous about coming back to the office, but the Brooklyn and Queens commercial real estate markets will rebound despite the pandemic, outer-borough developers and brokers argued during a Commercial Observer forum Aug. 6.

The Brooklyn- and Queens-themed event kicked off with BRP Companies’ Meredith Marshall, a Queens native, extolling the virtues of building workforce housing in Jamaica. Marshall is working on one heavily subsidized project in the neighborhood: the 800,000-square-foot, two-tower Crossing at Jamaica Station, which will include 667 affordable rentals.

One tower is completely low-income housing, and the other is “mixed-income,” including moderate- and higher-income income units that approach market-rate rents for the neighborhood. Construction is nearly complete on the massive development, which sits next to the Jamaica Long Island Railroad and subway stations, along with the AirTrain to John F. Kennedy International Airport.

Marshall is also pushing forward on two largely market-rate projects in Jamaica that include 30 percent affordable housing, thanks to the Affordable New York program (formerly 421a). One is Archer Towers, which will have 620 units in phase 1 and 400 units in phase 2. The other is what he has dubbed “90Ninety,” for its address at 90th Avenue and 90th Street. The 12-story development will include 630 units of “workforce housing,” which essentially means “market-rate but affordable to middle-income renters in the neighborhood,” Marshall said.

The developer argued that there was a great need for unsubsidized housing for middle-class families. “We need to create housing for the workforce that isn’t subject to income limits,” Marshall said. “You see a lot of development that isn’t accessible to large swaths of the population.”

He added that “the best thing about workforce housing is that you target the same demographic [as moderate-income affordable housing] but you get a more sustainable project.”

On the first panel of the day, western Queens brokers and developers discussed the struggles of building, leasing and selling office space during the COVID-19 crisis.

Christopher Schlank, the founder and managing partner of Savanna, struck an optimistic note on his Long Island City properties, the Falchi Building and One Court Square.

“The lower density in Long Island City is hopefully going to be more attractive to tenants [during the pandemic],” Schlank said. He mentioned that there has been some tenant interest in both buildings, and his leasing team takes special precautions and has tenant brokers sign release forms before touring the property.

Schlank added that Savanna plans to move forward with redeveloping the “retail annex” at One Court Square, which had previously been open only to Citibank employees in the building. The Queens Public Library recently shuttered its branch in the space, which it had occupied since 1989, after Savanna declined to renew its lease. He hopes to transform the annex into a glassy atrium with a food hall.

“If you look at the retail around One Court square, it’s starting to develop but it’s heretofore been pretty minimal,” the developer said. “Most of the [residential] projects have very small retail components and most of the projects don’t have a lot of food. There’s not a lot of food service…because people don’t want supermarkets in their building.”

Elizabeth Lusskin of Long Island City Partnership added that many residential developers in the area had created amenities that were reserved for tenants, making a lot of buildings “very inward facing.” Rockrose, she noted, has done a good job of attracting retailers to its buildings in the neighborhood, and Tishman Speyer has built 50,000 square feet of retail with a food hall for its two-tower JACX complex.

Meanwhile, Kaufman Astoria Studios CEO Hal Rosenbluth lamented a problem that existed long before the pandemic: anti-development sentiments in Astoria and Long Island City. As he has tried to expand his studio complex on 36th Street between 34th and 35th Avenues, he has struggled to find community support for his project.

He added that his plans include adding new community facilities and green open space.

“There’s nothing post-COVID about where we are now,” he noted. “We were seeing some things earlier in the year that COVID just exacerbated—we saw a softening market, we saw a resetting in pricing in the first quarter. We have 37 properties under contract, and 22 deals were pushed. April was really a bottoming of the market.”

The Brooklyn panel had a sunnier outlook on operating offices and retail in the midst of a pandemic.

“Although we’re not near our normal pedestrian counts, we’re only 50 percent off, as opposed to some places in Manhattan that are 80 to 90 percent off,” said Regina Myer, the president of the Downtown Brooklyn Partnership.

Kathe Chase, the director of Industry City, said that the industrial-turned-office-and-retail complex in Sunset Park had seen weekend traffic return to 50 percent of pre-COVID levels.

“We have the luxury of deciding when to open restaurants and offices,” Chase said. “We’ve been careful to open slowly, to monitor the guests that come into Industry City and the people that are working upstairs. There’s enough density that it feels alive when you come back to work.”

Johanna Greenbaum, the chief development officer and executive vice president of the Brooklyn Navy Yard, said that more tenants had begun to return to the yard. Some manufacturing tenants in the 300-acre industrial park, however, had worked through the outbreak.

“We’re seeing a resurgence of people to the Yard,” said Greenbaum said. “A number of our tenants have pivoted to making PPE. We have a Yard PPE vending machine.”

She felt that tenants will end up taking more space in order to socially distance their employees upon return to the office.

The amount of office space “per square foot per person is incredibly low” now, she said. “That’s not the way offices used to be. I don’t think people will accept coming back to an office that’s below 100 or below 200 square feet per individual.”

The Downtown Brooklyn Partnership’s Myer noted that the need for larger office spaces points to why the stalled Industry City rezoning should go forward.

“We think it’s vital to the borough that Industry City has the ability to grow.”