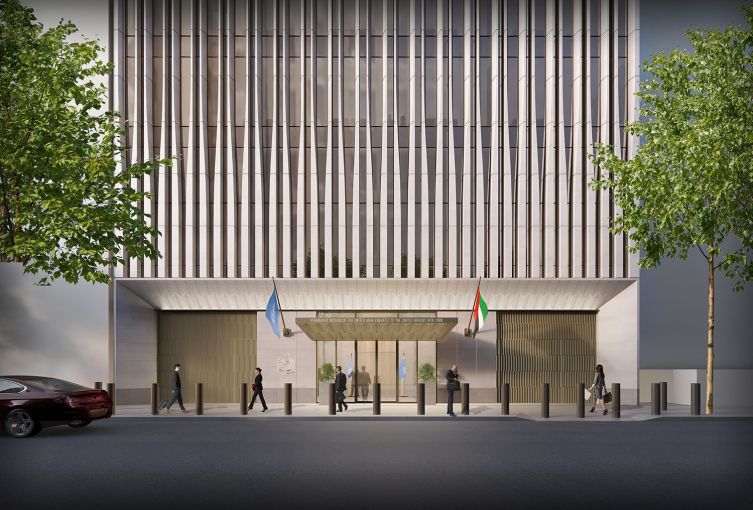 The United Arab Emirates' new permanent mission to the UN features a facade inspired by Art Deco New York City landmarks, with a subtle frieze of palm leaves above the entrance. Rendering: SOM 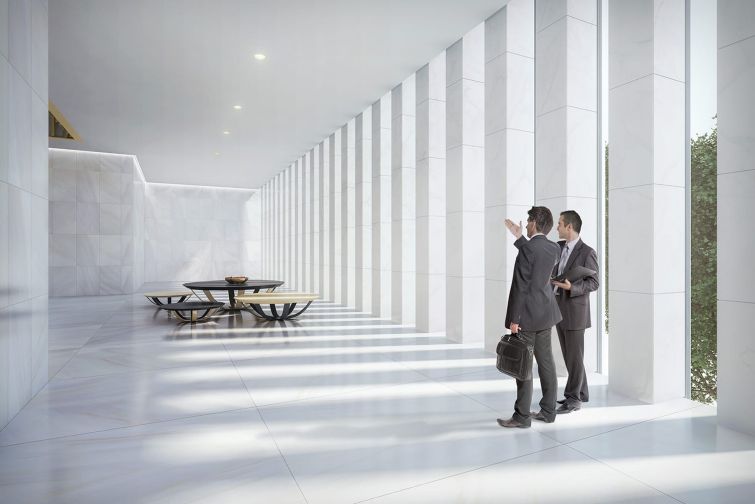 The second floor operates as a grand public event space for the building, clad in white marble. Rendering: SOM 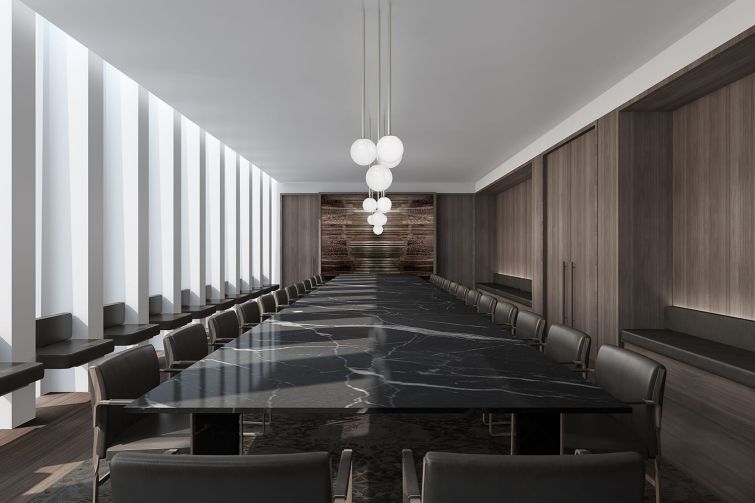 There are a range of meeting rooms in the building, including formal boardrooms with dramatic black Tunisian marble tables. Rendering: SOM 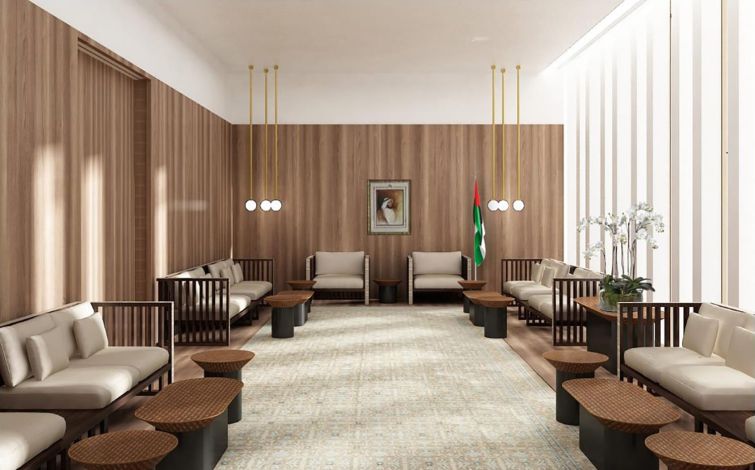 Here is a more informal meeting room known as a majilis, with furniture custom-designed by Middle Eastern artists. Rendering: SOM
Previous Next

The ten-story, 75,000-square-foot building at 315 East 46th Street will be clad in Indiana limestone that has been milled into thin, tapered strips and placed on top of a glass facade. The aim was to channel classic Art Deco icons like the Empire State Building and Rockefeller Center. A frieze above the entryway will incorporate abstract patterns of palm leaves, and the tapered strips of the facade are also meant to invoke palm leaves.

“When we were asked to build this building as a space for diplomacy, we were asked to think about a considered blend of architectural legacy of New York and the architectural detail and patterns from the Middle East,” said SOM Partner Chris Cooper. Construction began in September 2017 and is scheduled to wrap this December.

Each floor is meant to resemble the layout of a courtyard home. The main entrance, in particular, will be split between two floors. The walls, floor and ceiling of the ground floor will be clad in dark Canadian limestone, and the material will cover a grand staircase linking the entry floor to a grand event hall on the second floor. The second story will feature tall ceilings and walls and floors covered in white marble.

“The whole building is a series of opportunities for discussion,” said Cooper.

The third floor will consist of a series of amenity rooms centered around a long, central space. The main room will be split by translucent, wooden room dividers into separate seating areas and a dining room. There will also be a library, child care center, lounges and a pool table.

The remaining floors will include offices and conference rooms, with the seventh and eighth stories reserved for executive offices and formal meeting areas. These floors will have several majlis—an Arabic term for informal meeting spaces with several chairs arranged along the edges of a room, with small tables. The furniture in the majlis will be distinctive; the small wooden tables will feature a patterned geometric top meant to invoke the Middle East, and the soft couches and chairs will have mother of pearl inlays on the armrests. Most of the furniture in the building will be custom-designed by Middle Eastern artists, including Lebanese designer Nada Debs and Naqsh Collective in Jordan.

The top story will host a rooftop terrace with an enclosed glass room and a large outdoor area with soft seating, plants and a view of Dag Hammarskjold Plaza below.