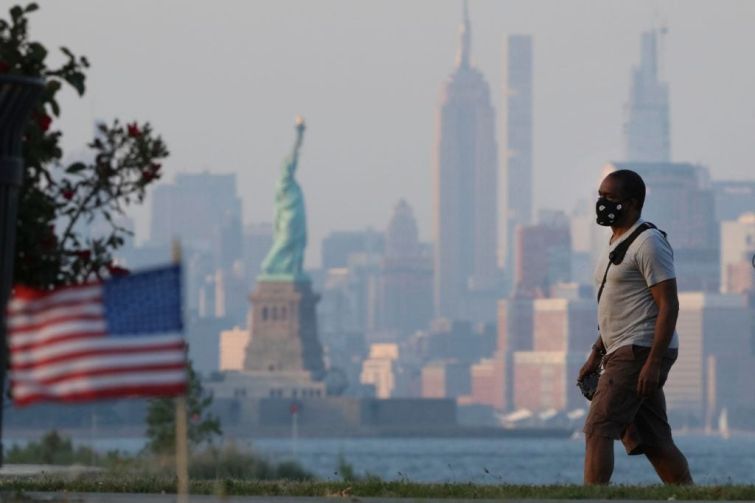 NEW YORK, NY - JULY 04: A citizen wearing a face mask walks by a beach on Independence Day on July 4, 2020 in New York City. Americans across the country celebrated Independence Day amid the spread of the coronavirus (COVID-19) pandemic. (Photo by Liao Pan/China News Service via Getty Images)

The American economy had its worst quarter on record this spring, as the country shut down in response to the coronavirus pandemic.

Gross Domestic Product fell by 9.5 percent, quarter-over-quarter, in the second quarter, and by 32.9 percent compared with the same period last year, according to numbers released by the Department of Commerce on Thursday.

In dollar amounts, GDP shrank by $1.8 trillion in the second quarter, for a total of $17.2 trillion.

The news comes as the number of new unemployment claims filed rose for the second week in a row, and with the expanded unemployment benefits from the coronavirus stimulus package set to expire Friday.

Unemployment in June stood at 11.1 percent, down from the 14.4 percent peak in April, according to the Department of Labor.

The numbers reflect the extended shutdowns across the nation, the bulk of which occurred during the second quarter, during which most businesses closed, spending contracted, and millions of people lost their jobs. As the country reopens, some of those numbers are expected to rebound, but with ongoing outbreaks in many states, any rebound is likely to remain uneven and uncertain.