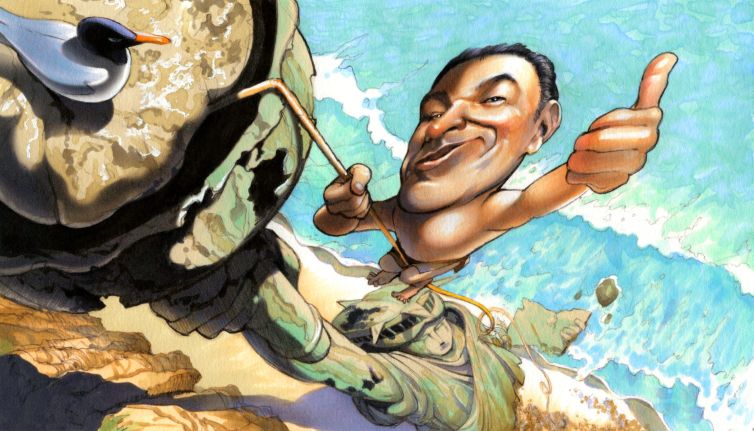 Doug Harmon makes the climb into the teens. Illustration by Bruce MacPherson.

Usually we take a page in every year’s Power 100 to talk a little about who jumped the most, and why. This year it felt closer to a steep, treacherous climb.

For some of the top power players on our annual list, fighting for a higher spot is a little like being in a trench in 1916 in France. Success is measured by inches and achieved at a blood-soaked cost.

Douglas Harmon and Adam Spies of Cushman & Wakefield always occupied a perennial spot high up on our list. But having their names attached to so many marquee deals for so long nudged an extremely enviable No. 21 spot on last year’s Power 100 to the No. 14 spot this year.

Those who have breached the top 10 position usually find themselves stuck in amber. But Blackstone has made some extremely shrewd and well-timed moves into industrial real estate, so they managed to slide up five whole spots from No. 8 to No. 3. RXR Realty’s Scott Rechler was No. 4 last year, but he is also well-positioned in light of the current crisis, and we felt he should move up to the No. 2 spot.

However, there is always some room for the dramatic boost. And this year’s breakout climber was Gov. Andrew Cuomo. Since becoming governor he had always occupied a respectable place on the list. But given his prominence, his control over the state budget and his handling (and sometimes mishandling) of coronavirus, he made the biggest leap from No. 34 to No. 1.

The drops were, on the whole, less conspicuous. If we were to take it companywide, rather than individually, the biggest drop of the year would be WeWork, which clocked in at No. 16 last year and is this year’s No. 75. But otherwise, we felt that given how badly retail has been suffering under the pandemic, most of the prominent retail brokers or owners got some demerits. Likewise, hospitality suffered in terms of its ranking or disappeared from the list altogether.

Rest up during the winter, power 100s. There will be higher peaks to climb next year.