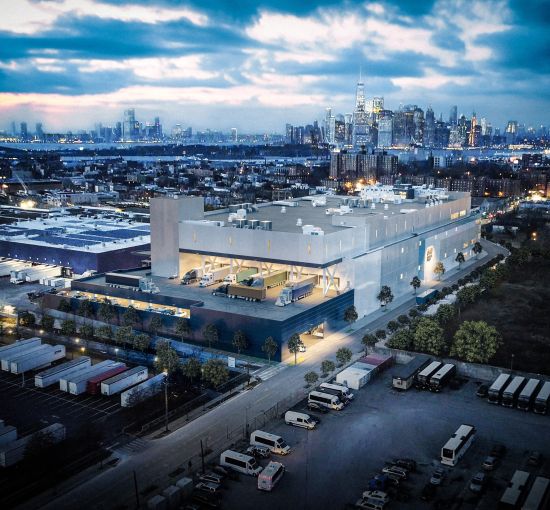 J.P. Morgan is in the senior position, while Square Mile provided a mezzanine loan in the deal, although the loan amounts could immediately be gleaned. The deal closed on July 20, sources said.

Designed by Ware Malcomb, the three-story property, which broke ground last summer, will become the first multi-story logistics assets on the East Coast, and it will be surrounded by the largest collection of e-commerce shoppers in the U.S., according to data from CoStar Group. Within an hour drive of the site are 13.5 million consumers that would feed e-commerce distribution, according to DH Property’s website.

Officials at J.P. Morgan declined to comment, and a representative for Square Mile was not immediately available to respond to an inquiry.

The roughly 337,000-square-foot project sits on just over four acres and will sport access ramps to its loading docks on the second floor and there will be a private elevator servicing the third floor, as per CoStar. Each floor spans around 108,000 square feet to 115,000 square feet, with ceiling heights ranging from 18 to 28 feet. CoStar estimates that rents will run between $20 to $24 per square foot.

JLL’s Rob Kossar and Leslie Lanne are spearheading leasing at the site, according to DH’s website. The joint venture has also tapped Hollister Construction Services to lead the design, planning and build out, as per the firm’s website.

Goldman led the acquisition of the site in February 2018 for $47.5 million, cushioned with around $33 million in financing from AllianceBernstein, property records show.

Last summer, Joseph Sumberg, a managing director and co-head of private real estate at Goldman Sachs Asset Management, told the New York Business Journal that the joint venture moved forward with the development without a pre-leasing campaign. Sumberg told the publication: “We broke ground without waiting for tenants… We are that confident.”

He said they drew inspiration from industrial sector mainstay Prologis’ multi-story logistics facility in Seattle, the first of its kind in the country, which it finished in the fall 2018. It is also three stories and it sports 590,000 square feet.

While COVID-19 wiped out any market presumptions that might’ve existed prior to early-March 2020, social distancing guidelines, lockdowns and quarantines have proliferated an increase in online shopping, from which the industrial sector has happily benefited. Other, less insulated asset classes, like hospitality, retail and office, haven’t been so lucky.

DH Property’s president Dov Hertz did not immediately respond to an inquiry. Goldman Sachs could not be reached.