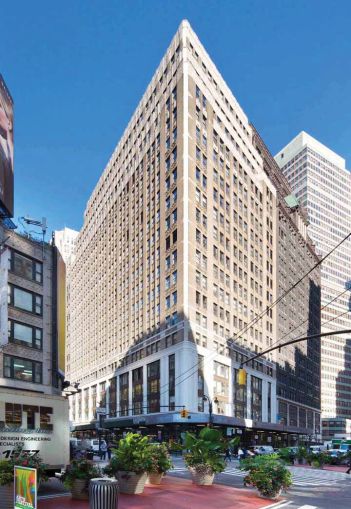 Savanna closed on its purchase of 1375 Broadway last week and landed a $388.5 million financing package in the process, multiple sources told Commercial Observer.

The deal — one of the very few large New York City office property acquisitions to reach the finish line during the COVID-19 pandemic — closed on July 10, with Savanna paying $435 million for the 27-story office asset, sources confirmed.

“We’re thrilled to close on the acquisition of 1375 Broadway and to have assembled a strong consortium of lenders and partners who share Savanna’s conviction in the quality of the asset and the potential to build value through and beyond the COVID crisis,” Cooper Kramer, a managing director at Savanna, said. “We appreciate the hard work on the part of all parties involved in the transaction. This is a terrific asset in an outstanding location, positioned to perform well in the face of any challenging market condition, and we are excited to own it and take it to the next level through our planned improvements.”

In January, Savanna recapitalized its office tower at One Court Square in Long Island City in a $880 million deal, with the same C&W deal team involved in the recap.

Savanna went into contract to buy 1375 Broadway — between 37th and 38th Streets — from Westbrook Partners in February, just prior to the onset of COVID-19, as reported by The Real Deal. Interestingly, Savanna previously owned the property, selling it to Westbrook in 2015 for $310 million. Savanna had first bought the asset in December 2010 for $135 million from Chedward Realty Corporation, according to data from CoStar Group.

Built in 1927 and designed by Ely Jacques Kahn, the nearly 500,000-square-foot office property’s largest tenant is accounting firm Anchin, Block & Anchin, which leases 117,00 square feet across seven floors, per CoStar data. The building is currently fully occupied by a range of other office tenants across a variety of sectors, including communications, manufacturing and utilities.