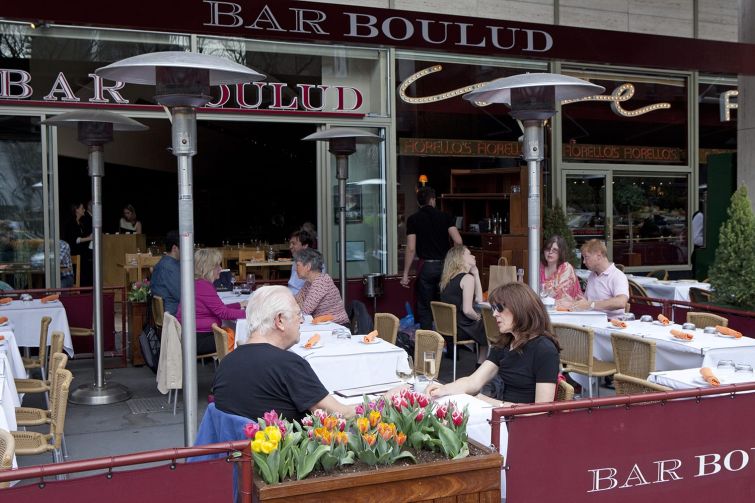 Restaurateurs, employees and diners alike are looking to the skies and praying that it doesn’t rain.

Alfresco eats have been a feast for the city’s dining-deprived millions – but for desperate owners, the payoff has varied from salvation to crumbs.

More than 6,000 restaurants in New York City have set up outdoor seats since Gov. Andrew Cuomo launched Phase II of the city’s reopening on June 22. More are coming with an “Open Streets” program that will soon allow eateries to spread out on weekends deep into the middle of certain streets.

After more than three months of lockdown that reduced owners to desperation, outdoor service became even more crucial this week when Cuomo and Mayor Bill de Blasio temporarily postponed the start of 50 percent-capacity indoor service from its previously announced July 6 start date.

I’ve enjoyed outdoor meals around town since Day One. Food and service were remarkably up to par. Customers seemed thrilled to enjoy a restaurant experience again. Some  on the Upper East Side even slightly dressed up.

But for owners, New York City Hospitality Alliance executive director Andrew Rigie said, “it really depends on how many seats they can get depending on their sidewalk frontage and curb space.” After all, there have been definite winners and losers when it comes to the amount of available sidewalk space, nearby car traffic and even shade (a simple but powerful draw as summer ramps up). Regardless, Rigie added, “at this point, any revenue coming in is much better than the alternative.”

At bustling Morgan’s Brooklyn Barbecue at 267 Flatbush Avenue, near Park Slope and the Barclays Center, outdoor seating helped boost revenue to 85 percent of the year-round norm.

For sure, about 90 percent of that 85 percent is due to Morgan’s robust takeout and delivery business. “This is a community where people actually live,” owner Peter Glazier said. “They’re not all in the Hamptons like on the Upper East Side.”

The alfresco boost is like icing on the place’s Famous Texas Chocolate Layer Cake. “It’s really just gotten started,” Glazier noted. The corner eatery has 60 indoor seats and 70 outside during normal times, but only 30 alfresco seats today due to spacing rules, he said.

But outdoor service is a risky proposition and disastrous when rain strikes. Unlike during normal times when customers can move indoors, “If people have ordered but never got their food, we have to comp them,” Glazier said.

When a squall struck around 6 p.m. one night late last month, “we lost our customers and 50 pounds of ribs” that had already been ordered, he said.

Sidewalk scaffolds for building facade repairs, usually a curse, come in handy at some locations. Avtar Walia, owner of the elegant and popular Indian restaurant Tamarind Tribeca at 99 Hudson Street, is thrilled to have 14 tables beneath such a bridge along Hudson and Franklin streets.

Although the 45 outdoor seats are few compared with Tamarind’s 175 indoors, “The whole week was busy,” Walia said.

Tamarind was only bringing in around $1,000 a day on takeout and delivery, “but now we can go up to $9,000 in sales a day.” Although that’s still only “maybe one-fourth of our normal revenue, I can breathe more easily,” Walia said.

It’s a different story at Italian trattoria Carmine’s at 2450 Broadway near West 91st Street. Jeffrey Bank, CEO of Alicart Restaurant Group, which owns two Carmine’s locations, said, “Outdoor is not really going to be a lifeline for us. We’re only allowed to have around four tables. No matter how much we steam-clean, the street still stinks of garbage.”

The alfresco scene “can look vibrant,” he said. “Go down Amsterdam Avenue and you see a lot of places. But for every one that’s there, there are four that haven’t figured it out yet.”

“It’s helping lots of my friends with smaller restaurants. It’s saving their businesses,” Bank said. But he cautioned that outdoor seats “are a Band-Aid when the industry needs open-heart surgery. I don’t think it’s helping more than 20 percent of Manhattan restaurants.”

Some owners were pleasantly surprised that the normally cumbersome city bureaucracy was streamlined to allow swift permitting of outdoor seating, including where it was never before previously allowed.

“It’s been very painless and easy,” said Bernard Collin, a partner in high-end French spots La Goulue and Orsay on the Upper East Side.

The places have about 80 outdoor seats between them, of which half are on the sidewalk and in the street decorated with floral planters. The extra seats required a permit “that came within 24 hours,” Collin marveled

He said outdoor seating “is definitely not a sustainable business permanently, but every bit helps.” When 50 percent indoor seating is eventually allowed, he hopes that plus the alfresco setup “would bring us to break even.”

Outdoor eating has brought some dead spots back to life – although not yet Times Square, where food kiosks remain shuttered.

But on Broadway’s “restaurant row” between West 63rd and 64th streets, three big venues – Bar Boulud, Café Fiorello and The Smith – are bustling day and night while Lincoln Center across the street remains dark.

Daniel Boulud said his landlord was “very cooperative” in allowing him to set up 70 Bar Boulud seats on the patio, where that restaurant normally shares outdoor space with Boulud Sud around the corner. “We’re doing about the same business as we normally do [during the terrace season], even though we don’t have a hyper-rush before the opera. The bottom line will never be the same, but the average check is not so bad.”

Over the longer term, “We have no idea [if it will work],” Boulud said with a hearty laugh. He estimated that in a normal year, revenue from the patio “will not represent more than 20-25 percent over the total year, but it  could be 40 percent” during the months that it’s open.

Of that 40 percent, “If we’re getting 60 percent of that, it’s nice. We’re starting to walk but we’re not yet ready to run.”