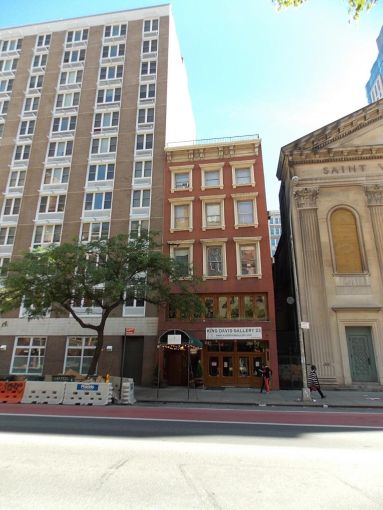 A partnership between Jeffrey Dagowitz’s JHG Holdings and former We Company CEO Adam Neumann has nabbed a $75 million refinance for its development site at 123 West 23rd Street, sources familiar with the deal told Commercial Observer.

G4 Capital Partners provided the debt, which refinances $65 million in debt on the site from November 2017 and acts as a bridge loan. Iron Hound Management negotiated the debt.

A G4 Capital official declined to comment, as did Iron Hound officials.

As reported by Bisnow, Dagowitz assembled a parcel in Chelsea that included 123-131 West 23rd Street, 116-120 West 24th Street plus 83,000 square feet of air rights, giving a total of 243,000-square-feet in development rights. Adam Neuman entered the deal in November 2017 when he bought the $65 million mortgage that Bank of America had once held on the parcel under an LLC named Chelsea Realty Capital. The Real Deal then reported that the joint venture was planning a WeLive location at the site.

It was previously reported that the property erected at the site would comprise both a hotel and residential component. A source close to the deal noted that zoning for the assemblage—which spans a large swath of West 23rd and West 24th Streets between Avenue of the Americas and Seventh Avenue —gives the developers a few options, but a building that includes a mix of office and retail space will likely be the winning formula.

Neumann has been relatively quiet since he resigned from his position as CEO of WeWork in September 2019. Last year, the former multi-billionaire ranked at No. 16 on CO’s Power 100 list, but after a tumultuous year Bloomberg now pegs his worth at $450 million.

It’s not the first time that G4 has provided debt on Dagowitz’s developments. The lender was also behind the $73 million construction loan on Actium Development Company’s 88 Wall Street in September 2018. Actium is converting a 13-story office building into a hotel at the site.

The Iron Hound team also arranged the debt in that instance.

Dagowitz and Neumann could not be reached for comment by press time.