How Doctor’s Offices Have Weathered the COVID-19 Pandemic 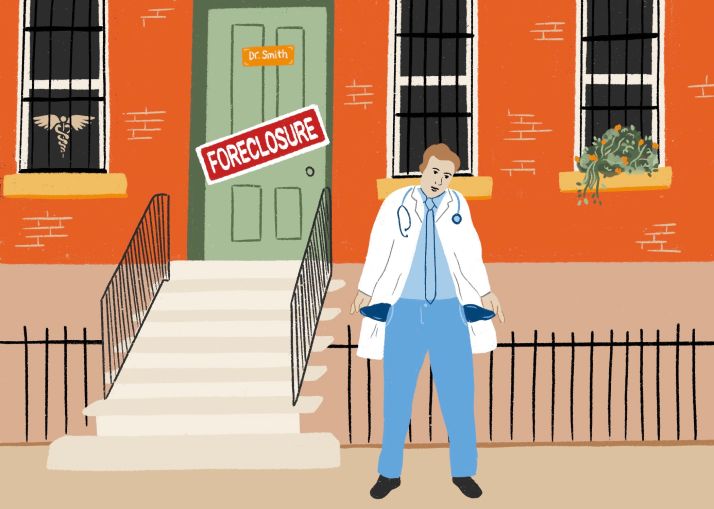 Many private practice doctors are struggling financially after not being able to see patients in person for two and a half months. Illustration: Sol Cotti

When coronavirus overwhelmed New York City, private practice doctors were suddenly forced to grapple with seeing their patients remotely, convincing insurance companies to pay for it and figuring out how to protect their staff, all while continuing to pay rent on their office space with significantly less revenue.

Specialists were particularly hard-hit. Most specialized doctors have seen significantly fewer patients since Gov. Andrew Cuomo issued stay-at-home orders for the entire state in late March. Although some have been able to talk to patients on the phone or see them via a telemedicine platform, most doctors have a hard time doing effective examinations unless they can see patients in person.

Dr. Steven Pearlman, a facial plastic surgeon with an office on East 60th Street, said that he’d taken in zero income since March 16. Typically he flies around the country and the world to see patients who are interested in rhinoplasty or revision rhinoplasty—that is, nose jobs and fixing nose jobs that have gone wrong.

“For nasal examinations you normally look inside their noses and feel the structure, and then they decide whether it’s worth flying to New York to see me,” said Pearlman.

Now he does virtual consultations with people who are considering surgery and with patients who are recovering from a surgery performed before the coronavirus pandemic struck. However, he doesn’t feel comfortable charging for video consultations, because it’s difficult to determine the structure of someone’s nose just by looking at it. “Since it’s not a true valid consultation, I won’t charge for it.”

He also does more run-of-the-mill procedures, like injecting Botox and fillers, and other kinds of facial surgeries, such as facelifts, ear surgery, facial implants and brow lifts.

Next week, he’ll start seeing elective patients for in-office consultations and non-surgical procedures, and his first surgery is scheduled for the following week.

Pearlman has also developed a strict protocol for patients coming into the office beginning next week. Patients are expected to use hand sanitizer and put on gloves when they come in, wear masks and have their temperature taken by a staff member through a gap in a plexiglass screen. They’re also asked if they or a family member have a cough or any other COVID-19 symptoms. Patients won’t sit in a waiting room—they aren’t allowed to come early—and appointments will be spaced far enough apart that patients don’t interact with each other.

He and his staff will wear N95 masks, surgical scrubs, glasses or goggles, and insist patients keep their masks on during examinations. If the exam involves working with the mouth and lower part of the face, patients will gargle an antiviral solution, he said.

For surgery, he’ll wear a reusable N100 respirator half-mask, which is typically used to work with toxic chemicals.

Spacing out appointments means seeing 50 percent fewer patients per day, and that will naturally mean less revenue in the near term.

“We can’t run around and see multiple patients at once like we used to,” said Pearlman. “That will affect income.”

Meanwhile, some doctors’ offices only closed for the month of April to minimize financial losses. Bob Glazer, the CEO of ENT and Allergy Associates, said that he closed 39 of his company’s 46 locations in New York and New Jersey at the end of March and reopened on April 27. Like many practices, they didn’t have a telehealth service until the pandemic hit. By March 25, they had a telemedicine video chat feature up and running, which allowed their 220 physicians to see 500 to 600 patients a day.

The firm, which typically sees about 90,000 patients a month across all of its offices, also employs otolaryngologists, allergists, audiologists, nurses and front- and back-office staff. It was forced to furlough about 800 of its 1,200 employees during the height of the quarantine measures, but it has already rehired 600 workers. Most of the staff also took pay cuts, which Glazer said he hopes to reverse over time.

The stay-at-home orders “had a significant negative impact on patient volume by March 20. Patient volume was down 90 percent.”

Glazer said he had to move quickly to cut costs. “We contacted our landlords saying we would pay 50 percent of our rents in April, May and June, and beginning July 1 we’d pay 100 percent. And that we’d pay it back over six months, by October 1.”

Like other medical practice groups, Glazer has spaced out appointments, ordered extensive personal protective equipment for his staff, instituted temperature checks for staff and patients, and allowed patients to wait for their appointment outside the office, until a front desk person calls them. The measures also include wiping down equipment and rooms with sanitizing wipes between appointments and deep sanitizing from a cleaning service at night.

Several major insurance companies denied his request to add a $10.50 surcharge per patient to cover the cost of PPE for his entire staff. He will still bill it to them, and when they deny it, he plans to bring it up to state legislators.

“Every one of the health plans said, ‘No, we won’t pay you more than what we contracted for you,’” said Glazer. “The health plans are swimming in money right now because all the elective surgeries were cancelled.”

The ENT firm has lost a significant amount of cash over the past few months, between reduced patient volume, no surgeries and the added cost of PPE.

“I’m trying not to think about it,” said Glazer. “Right now we’re down 60 percent in [bill] collections.”

He predicted that his business wouldn’t be back to normal until the first quarter of 2021.

Other doctors are feeling more positive about their business. Dr. Vidaya Velada, who runs her own small internal medicine practice at Fifth Avenue and East 61st Street, said that being forced to switch to telemedicine helped improve her work-life balance.

“My days were like 16 hour days before the pandemic,” said Velada. “When the pandemic came along, it just stopped me and made me do telemedicine. It gave me a couple of hours of extra sleep. Maybe it’s a sign we need to slow down in New York.”

She added, “Financially it might not make sense, but as a doctor you realize that this might be a good way to see patients.”

Velada continued seeing patients in her office until March 19, when she realized that she’d been seeing a large number of people with COVID-19 symptoms but only had a handful of testing kits. The next day, she ramped up her telemedicine service and was able to get insurers to cover the cost of the consultations.

The remainder of March and April were incredibly busy, she said. Roughly 25 patients would schedule telemedicine visits a day, and then she would speak to another 50 to 60 patients on the phone. She has seen  about 400 patients with COVID symptoms, of whom five or six were sent to the hospital.

“It was like being a single-disease doctor where we’d just hear from patients with COVID and COVID-related symptoms,” she said. “When it comes to the pandemic itself, the volume started going down in May” as the number of cases in the city flattened, she noted. “It was a happy moment to see that the number of patients calling me was directly proportional to what was happening in the city.”

She reopened her office on June 1 and is spacing out her appointments, so she sees roughly half the patients that she did pre-coronavirus. Between that and the added cost of personal protective equipment, she knows that she’s losing money.

“You’re looking at higher expenditures and fewer patients,” she said. “And the PPE is not readily available.”

Still, she felt that physicians should always prioritize patient care over costs.

“The financial situation shouldn’t determine how you make decisions during the pandemic,” Velada said. “You need to have a clear vision of what you’re trying to do and the finances will always follow.”