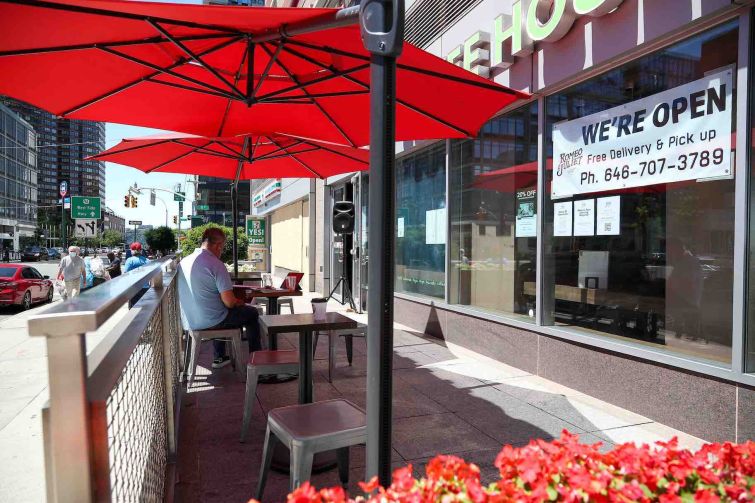 On May 17, in anticipation of summer, two months after Gov. Andrew Cuomo ordered all “non-essential” businesses to shut down due to the coronavirus pandemic, Roberto and Giselle Deiaco set up a handful of small tables and chairs on the sidewalk of their restaurant Avena at 230 Sixth Avenue north of Houston Street. There was no waiter service, but customers could order takeout dishes and enjoy them alfresco. The tables were spaced for social distancing with at least six feet between them.

But cops came by a few days later and ordered them to remove the chairs. The Daicos put flowering plants on top of the tables instead. They taped NYPD posters reading, “Take Out, Don’t Hang Out,” on their windows.

As a result, Giselle said, “Now, people who buy takeout sit on the public benches, not socially distanced, near the basketball court right next to us. Some entire families sit close together there, while we had put in six-feet markers to keep everyone safely apart.”

Adding to the absurdity, neighborhood people who are marching to protest the murder of George Floyd “can’t eat and feel nourished at our tables,” she said—even though they’ve been marching on top of each other all day.

The Avena situation reflects the maddening  inconsistency of the state and city ban on outdoor restaurant dining, which won’t end until the second phase of Cuomo’s snail’s-pace reopening protocol—which is at least several weeks away.

Until then, resourceful eaters and owners are finding loopholes to work around the ban. The owners are seething that while tens of thousands of protesters march in closely-packed ranks, they’re not allowed to seat a handful of widely-spaced customers.

The city has thousands of outdoor restaurant seats from Coney Island to Riverdale. Mayor Bill de Blasio said last week that when Phase II begins, the city will allow even more by expanding seating areas to sidewalks and even parking spaces on the street. But he was short on specifics.

A bill in the City Council would require the Department of Transportation to select specific streets, sidewalks and plazas not currently licensed for food service, but where restaurants could add more seats.

While everyone awaits action, more than a few places were serving guests at sidewalk tables in Manhattan last weekend—among them, Hourglass Tavern on West 46th Street’s “Restaurant Row” between Eighth and Ninth avenues.

The party didn’t last long.  An Hourglass manager who answered the phone Monday said, “There’s been some confusion about it, so we’re not doing it again for now.”

In my Upper East Side neighborhood, some casual eateries on First and Second avenues let customers eat and drink at a handful of sidewalk tables, notwithstanding signs which forbid it—at least until cops put a stop to it.

FiDi-dwellers are using river-facing outdoor tables at shuttered Industry Kitchen, near the South Street Seaport, to bring takeout meals from scores of nearby places such as Melt Shop and Chipotle.

At Australian-themed Hole in the Wall at the eastern end of 36th Street, customers order takeout meals from inside and consume them at outdoor tables that belong not to the restaurant, but to the American Copper rental apartment tower next door. “I love the Instagrammable avocado toast and it’s a great setting for watching the ferries and all the other waterfront activity,” my friend Karen Danick, a restaurant publicist and marketing consultant, said.

But I found the best, golden loophole at Café Fiorello on Broadway between West 64th and 65thstreets. Shelly Fireman’s popular trattoria on the Lincoln Center-facing “Restaurant Row” has long been licensed for a large sidewalk patio.

The restaurant technically isn’t serving food on it. But some customers who order off its Italian takeout-and-delivery menu consume their alfresco meals on eight widely-spaced, small alfresco tables and a few benches designated for “waiting.”

They carry their bagged orders to the seats, unwrap their pizza and pasta, and settle in—as I did several times. Two cops who went inside turned out to be putting in their own takeout orders.

It was the closest thing to pre-pandemic outdoor eating and it felt like heaven after two months of dining-out deprivation. We enjoyed just-made pesto triofe pasta, gem lettuce Caesar salad and fresh vegetables while guys at the next table leisurely put down a thin-crust pizza and a few glasses of white wine.

Although the passing sidewalk scene was subdued due to the fact that most everything nearby was closed — Lincoln Center, the Empire Hotel and stores — the strollers and their dogs seemed as colorful a procession as the St. Patrick’s or Puerto Rican Day parades.

Café Fiorello is the only spot on the block to offer the service. A rep for Bar Boulud next door, which also has a sidewalk patio, said, “Bar Boulud has no plans to open for outdoor service until it’s legally able to do so.  A soon as a Phase Two date is announced, we will be ready to welcome everyone back.”

Andrew Rigie, executive director of the New York Hospitality Alliance, said of the confusion over what’s permissible, said, “This is why we need to enact an outdoor dining system very soon, so restaurants have clear guidance and protocols to open quickly and safely so they can bring in some money.”