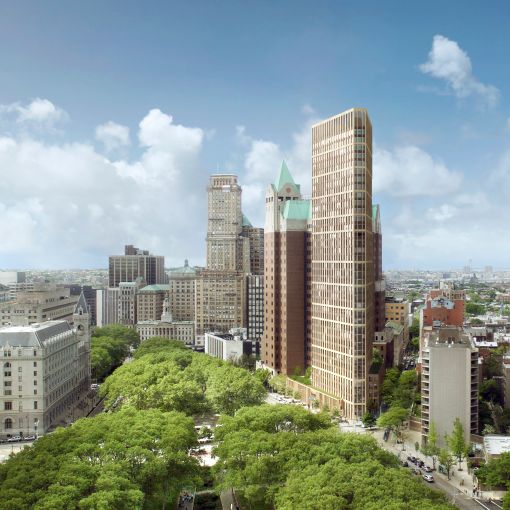 One Clinton Street in Brooklyn. Rendering: The Hudson Companies

The deal closed late Friday. Sources said that Goldman Sachs is also a capital partner in the deal, but Goldman officials could not be reached for comment.

The $200 million A-note has a current outstanding balance of $172million. An $80 million subordinate B-note — held by Related Fund Management — is not involved in the deal.

“We’re pleased to complete the sale of this loan, which we expected to be repaid later this year, at our March 31 book value,” Jeff DiModica, president of Starwood Property Trust, told CO. “The loan was a construction loan on a large residential project in Brooklyn. We had modeled that the loan would be substantially repaid in late summer. The proceeds will be added to our already strong liquidity, and we look forward to recycling this capital, and perhaps more, into very attractive longer term assets available today in our various business units.”

In 2015, the City Planning Commission gave David Kramer’s Hudson Companies the green light to acquire the Brooklyn Heights Library building at the site, which has an alternate address of 280 Cadman Plaza, for $52 million. The building was demolished in 2017 to make way for One Clinton — a 36-story condominium tower with views over Brooklyn and New York Harbor — plus a redeveloped, state-of-the-art Brooklyn Heights branch of the Brooklyn Public Library.

Brooklyn Roasting Company and a café curated by Smorgasburg anchor the Clinton Street side of the building and building amenities include a sky lounge with full kitchen, a landscaped terrace with grills, a fitness center with yoga studio, sauna and hot tub, a screening room and a music rehearsal space.

In addition to the senior and mezzanine debt— now held by Silverstein Capital Partners and Related—the project’s capital stack includes EB-5 financing and preferred equity as well as common equity.