Newsom: Some Calif. Businesses Can Reopen This Week 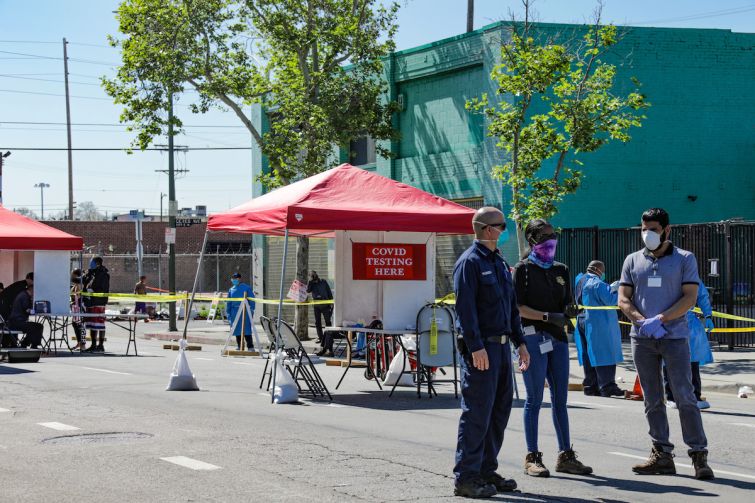 A coronavirus testing site is open in Skid Row in Downtown Los Angeles. Gov. Newsom announced on Monday that some parts of the state can move into the second stage of the reopening process this week. photo: Mayor Eric Garcetti's Office

California Governor Gavin Newsom announced on Monday that current data indicates that some parts of the state can move into the early part of the second stage of the reopening process as soon as this Friday.

SEE ALSO: Q&A: How the Federal Government Will Impact Office Leasing in the D.C. Area in 2021

Last week, Newsom announced the framework for four stages of phasing in different sectors of the economy that have been shutdown amid the spreading coronavirus. Entering the second stage Friday will allow a “gradual reopening” of lower-risk workplaces with adapted operations, including some retail, manufacturing, and logistics businesses.

Newsom also announced a new framework on Monday to ease restrictions and allow some counties to move quicker than others through the second stage if they attest to meeting certain criteria. The counties must first create and submit a public readiness plan. More details on the health guidelines and the criteria will be released Thursday for businesses such as bookstores, clothing stores, florists and sporting goods stores to begin reopening.

Not all “stage 2” businesses will be able to open Friday, even with modifications. Offices and dine-in restaurants, shopping malls, and schools will be part of a later stage two opening.

Los Angeles Mayor Eric Garcetti cautioned on Monday that the city will likely hit the stage two mark later in the month. He said he appreciated that Newsom’s plan allows counties “to do what makes sense in their region.”

“Today was a day that I know all of us Californians have been waiting for for some time,” Garcetti said. “But I want to prepare you, that these won’t be easy days, and they won’t be normal days, and we won’t be rushing back to something we once knew for some time.”

Newsom directed the State Public Health Officer to establish the criteria to determine whether and how certain counties can open up businesses in light of their local conditions, and one main condition will depend on the prevalence of the virus.

There are currently more than 56,300 confirmed cases in California, with nearly 2,300 deaths. About 26,240 cases are in L.A. County alone. Garcetti said L.A.’s death rate has been lower than the national average thanks to social distancing and stay-at-home orders, but it still suffered about half of the state’s coronavirus-related deaths.

“Our timing on opening may vary from other parts of the state,” Garcetti explained.

He said in the next few days, county and city officials will make more decisions on the pace of reopening, and they will be guided by the medical advice from public health officials for a “phased reopening.”

“It’s going to be tough for a while,” he said, adding that Angelenos will still need to practice physical distancing for some time, regardless of what is allowed to be open.

Last week, health officials in the Bay Area also announced that six San Francisco-area counties and the city of Berkeley extended their shelter-in-place orders through the end of May, ahead of the state’s order.