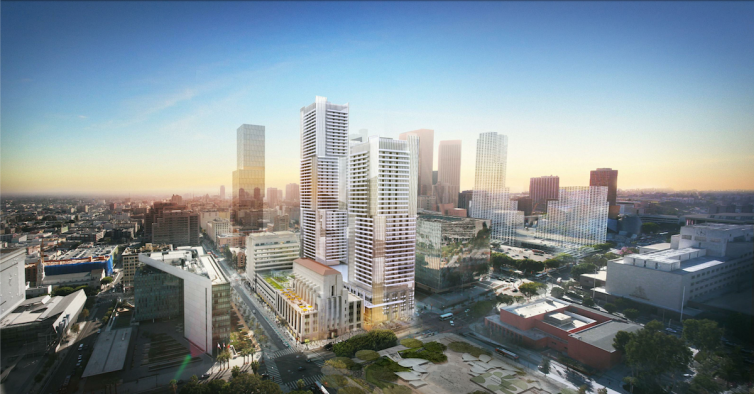 The Los Angeles City Planning Commission (CPC) decided to delay their vote on Onni Group’s massive 1.51-million-square-foot Times Mirror project in the heart of downtown, and instead directed the firm to “fundamentally” change the project and design.

The Canadian firm has been one of the most active developers in Downtown L.A.’s redevelopment boom. The firm purchased the Times Mirror Square complex in 2016 for $120 million, and plans to add two towers to the city’s skyline in a prominent district adjacent to City Hall and other notable landmarks.

But CPC delayed their vote on the project until July 9 after commissioners lambasted the design, and said they were “troubled” with the lack of affordable housing and the plans for city allocation fees. They told Onni Group to come back with a plan that is completely different “that can stand out in our skyline.” Onni Group was not immediately available for comment.

The proposed redevelopment would take up an entire city block on 3.6 acres at 121–147 South Spring Street. It calls for a 37-story “North Tower” and a 53-story “South Tower” with up to 1,127 residential units and almost 34,600 square feet of commercial space. The Times, Plant and Mirror Buildings — all listed in the California Register of Historical Resources — would be rehabilitated into 307,300 square feet of modern office space, and include a new 50,000-square-foot grocery store and 18,817-square-foot restaurant.

The existing site includes five connected buildings formerly used by the L.A. Times and other office and bank uses. The existing Executive Building at the corner of First Street and Broadway, and the parking garage would be demolished.

Dale Goldsmith, representing Onni, pushed against the delay. He said the firm could work with the city to come up with a better design, and make other changes. But he said the project needed to advance because shutdowns stemming from the spreading coronavirus will “really hurt the project.” It’s “very possible” that if things get worse, the project could not be completed at all.

“The more time it takes, and the deeper we get into a recession, the more likely this project will not happen,” he said. “We’re reaching 25 percent unemployment. The COVID-related economic problems are going to hit this city and this country like a tidal wave, and the financing windows are getting narrower and narrower. And continuing to delay seriously jeopardizes this project and will deprive union workers of thousands and thousands of jobs.”

“There’s a saying that time kills all deals, and I’m concerned that with the circumstances that exist here today, time will kill this project,” he added.

Commissioner Dana Perlman said they shouldn’t cede their responsibility, considering it is “one of the most significant parcels of property in the city of L.A.”

“Yes, Mr. Goldsmith, it is possible you may have financing that may dry up,” Perlman said. “It’s possible it may dry up regardless of what we do. It’s true, any delay could hurt the deal. However […] what’s best [for L.A.] is to make sure we have a design that really stands out.”

Commissioner David Ambroz said any financial issues are “self-inflicted, and any delay is on Onni.

“I am not at all persuaded by their drama,” he said. “I think it’s an iconic piece of property that we get one chance at, and I think we should not miss that chance, and their financials are not a consideration that we should base this decision on solely. … This is a self-inflicted problem that they’ve created themselves to have zero units of affordable housing and architecture that belongs in Phoenix, not L.A.”

The development is being designed to accommodate either condominiums or rental units, but the current proposal does not include any affordable housing components. There are no requirements for affordable housing on the site, according to Commission President Samantha Millman, but commissioners expressed concern about no onsite affordable units.

“When I was looking at the project, my first thought was, ‘Who is this project for?’” Commissioner Karen Mack said. “Before COVID-19, our poverty rate in this city was 30 percent. Who knows what it’s going to be after we get through this crisis.”

She said that moving forward, CPC should think about how to evolve the city based on the handful of crises the city is facing, and “be thoughtful about how to build a city for everyone, not just for those who are wealthy.”

“We really need to think differently about how we address this affordability issue even more so than we were doing before,” she said.

CPC also opposed the project’s Transfer of Floor Area Rights (TFAR) — a public benefit payment to allow for extra floor area. Onni proposed to spend about $24 million on historic preservation of the site, with some of the funds also going to the city’s affordable housing trust fund and to Pershing Square downtown.

Perlman said he was concerned Onni is going to use the TFAR to restore and improve the value of their own property, with “the key benefit going to Onni and not to the public.”

“The funds shouldn’t be used for anything but [the affordable housing trust fund], especially in this instance where they’re proposing to build 1,127 units without a single affordable unit,” Perlman said.

Several commissioners said they wanted a design more interesting than a rectangular box.

“Especially because it’s a special site for L.A., I would really like to see the applicant go back and bring something that is completely different from what they’ve been doing, and something that can stand out in our skyline,” said Commissioner Caroline Choe. “The company really has an opportunity to define L.A. with the large projects they have going on.”

Perlman said he was very disappointed by the “uninspired” design for a project “that’s going to be in the center of our city on a very iconic block, and it’s so bland.” He said AC Martin — the project’s design firm — is behind many good projects, including some in L.A., but “this is not one of them.”

“These are rectangular blocks on top of rectangular blocks,” he said. “I keep seeing inspirational designs in modular housing or for permanent supportive housing, and then these market projects are just block skyscrapers. I don’t understand this.”

Ambroz said he loved the planned use, and what Onni has brought to the community through other investments and projects downtown. However, he was “exhausted with the banal architecture.” He said the design is like “every other Onni project downtown — a big rectangle in the sky.” He pushed to delay the vote so Onni can come back “with something, anything inspiring.”

“And I’m glad to draw it for them if they can’t, or they can reach out to [a nonprofit] has been doing incredible architecture, or they could copy the courthouse across the street, or they could do anything other than a big rectangle in the sky,” he said. “It’s getting exhausting, and I think it’s trash in the downtown skyline. I’m very disappointed in the architecture.”