An Economic Development Nonprofit Gets New Offices at 28 Liberty 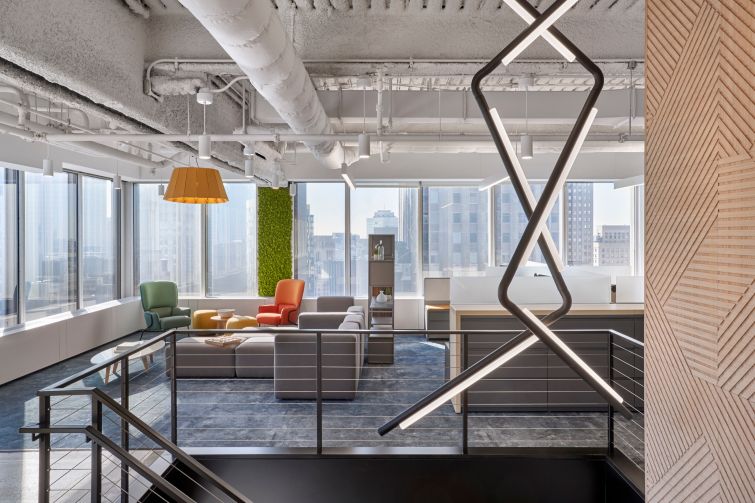 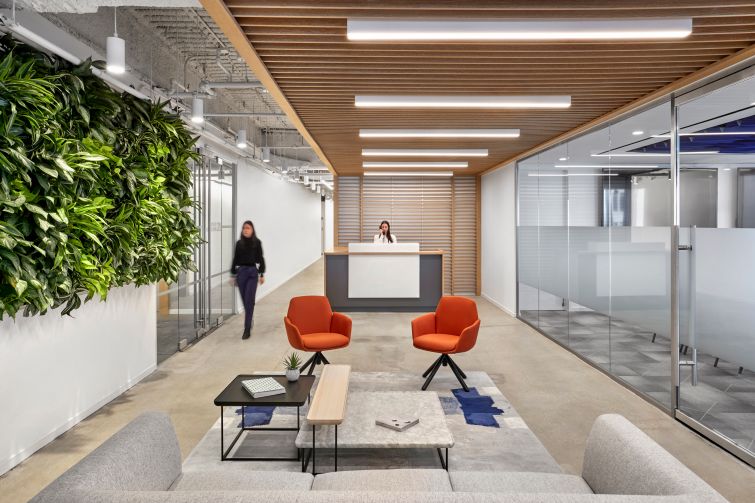 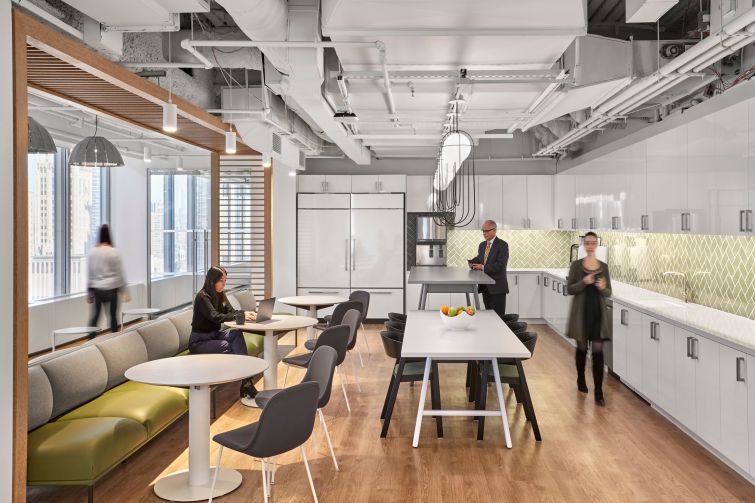 The new office also features two large pantries, along with a back kitchen for prepping catered food. Photo: Garrett Rowland/MKDA 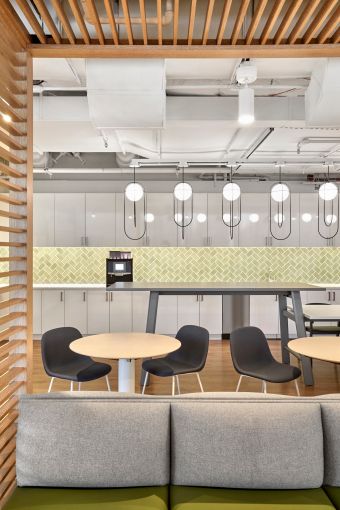 Another view of one of the pantries, which features unique light fixtures and a light green backsplash. Photo: Garrett Rowland/MKDA 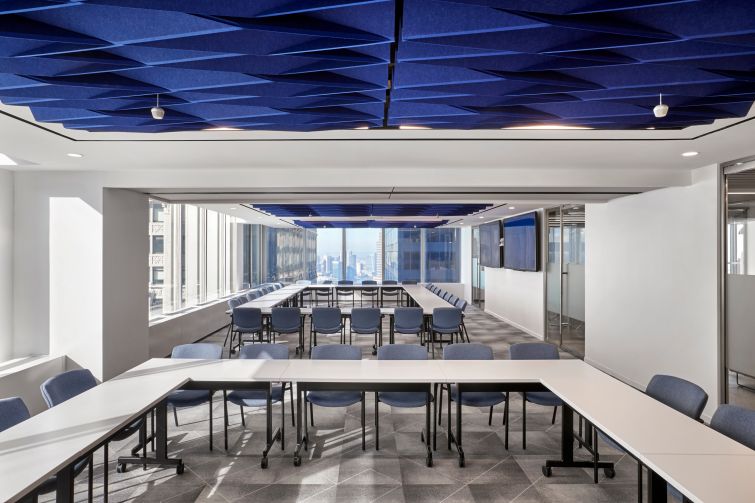 Blue acoustic fabric arranged in an eye-catching design along the ceiling helps dampen sound in this large board room. Photo: Garrett Rowland/MKDA 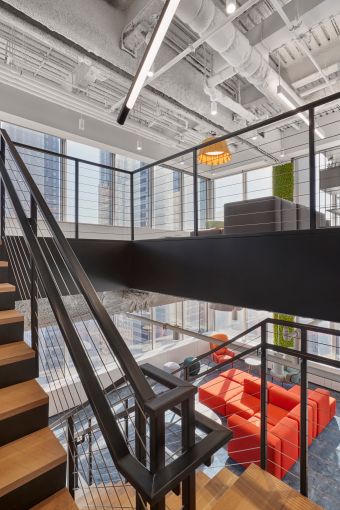 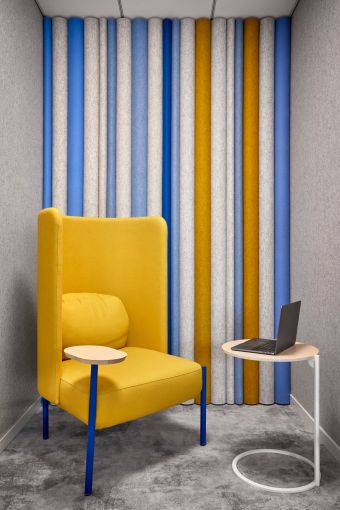 Phone rooms and small meeting rooms include fun, colorful touches like this yellow chair and blue and yellow acoustic felt along the wall. Photo: Garrett Rowland/MKDA 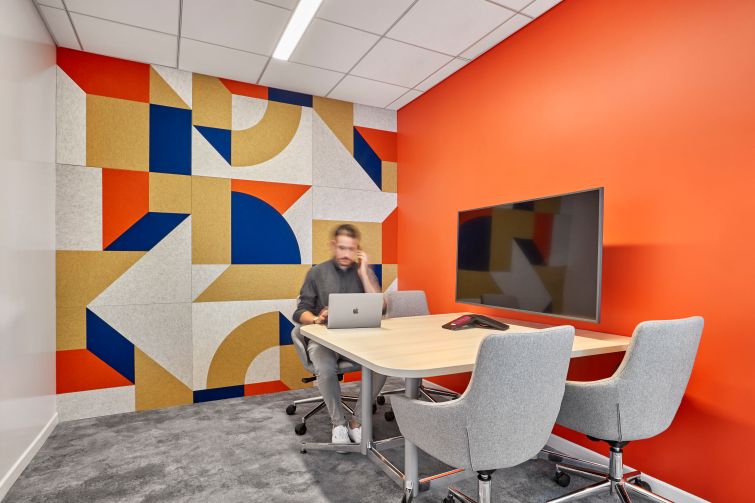 “This facility that we found them in was a dated, closed environment,” said Daniel De Siena, the lead designer on the project. “Small windows and not a lot of exposure to natural light.”

De Siena and his team wanted to create a place that was the antithesis of the organization’s old office: bright, open, colorful and filled with natural light. They also aimed to capture the nature of LISC’s work, which involves dispensing economic development funding and federal tax credits to affordable housing developers and local governments across the country.

“It’s a not-for-profit but it’s also a financial institution,” noted De Siena. “So they’re coming from an interesting dichotomy.”

Construction on the new space started in April 2019 and wrapped in September. The organization moved its 135 workers into 28 Liberty last fall.

LISC also wanted to economize its space, assuming about 20 percent of its team would work from home at any given time. It devoted a decent chunk of its new 60,700-square-foot office to communal work areas, including two cafes, phone rooms and small and large meeting rooms. There are also two multipurpose rooms with retractable dividers that can be put up to create a large boardroom. For every two seats at workstations, the organization wanted one seat of collaboration space. (It’s unclear whether the organization will redesign in the wake of the coronavirus pandemic, or if it will simply have a larger percentage of its workforce stay at home.)

Like many open office environments, the ceilings are outfitted with sound-absorbing materials that also add a pop of color and texture. The large boardrooms have acoustic blue felt arranged in diamond patterns along the ceiling, and the reception incorporates blonde slatted wood overhead and along the wall. There are also green plant walls in the reception and in the lounge areas, which are outfitted with mid-century modern upholstered chairs and couches in yellows, reds and grays. Each of the office’s two floors feature large, open seating areas with couches, along with a spacious pantry. The pantries have pale green backsplashes, white cabinets and appliances, hardwood floors and cushy upholstered benches in light green and gray.

The two floors of the office are joined by a large, open staircase, which has an unusual, angled LED light fixture that resembles two intertwined lightning bolts.

There are whimsical touches in the small meeting and phone rooms, like a row of rolled-up bright blue and yellow acoustic fabric on the wall and bright yellow chairs in one room, and a wall panel of abstract geometric blue, yellow and red shapes in another.