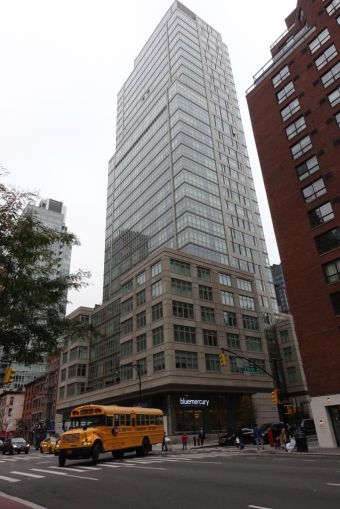 Developer Ziel Feldman’s HFZ Capital Group has paid the city $1.74 million in real estate taxes on four commercial condominium lots he owns in Midtown East and Chelsea, but according to an examination of city documents, nearly three months later, the city has yet to credit the accounts.

It was only as of the evening of Monday, May 11 that city records showed a balance of zero.

The condos in question sit at the base of two residential buildings Feldman built, the Halcyon at 305 East 51st Street and a twin-towered property at 505 West 19th Street. HFZ is currently in dispute over $60,452 for unpaid common charges to the Halcyon board which HFZ.

The apparent missed tax payments have landed all four lots among the 15,700 others in the city’s upcoming lien sale, which has been delayed indefinitely due to the coronavirus crisis. If the city failed to apply nearly $1.8 million to a property owner’s accounts, how many other payments have been lost or misapplied?

A source familiar with the transaction, provided receipts to show the payments were, in fact, made in February.

As of May 11, the city still showed the taxes were due, despite the developer’s records. The city’s Department of Finance did not comment by press time on why the alleged payments were not being properly credited.

At the luxury Halcyon condominium, located at the intersection of East 51st Street and Second Avenue, city records showed an entity controlled by Feldman owes the city over $833,660 in property taxes for the 15,532-square-foot retail space. A source provided receipts for $831,740 paid at the end of February. The remaining amount due would be automatically added interest.

Still, last week, the Halcyon board filed a lien of common charges for $40,569 on the retail space from amounts due for February through May 2020. The source familiar with the payment provided letters showing a dispute with the board.

The retail condo’s sole tenant is Bluemercury, which occupies about 2,000 square feet, while the remaining space has been vacant for several years.

Sources say HFZ is currently negotiating a few retail deals for the spaces being marketed through Gary Trock at CBRE, who did not respond to a request for comment. The space being marketed now includes portions of the property’s underground garage, and the firm has been eyeing possibly bringing in fitness facilities and other uses.

The firm also faced city clerical troubles on the Halcyon’s garage space. Records still showed as of Monday afternoon that HFZ owed the city $121,880 in past due property taxes on that condo lot, despite the receipts for payment. (The balance was zero later that evening.) The Halcyon board is now owed $19,982 for common charges for the months of February through May 2020.

Down in Chelsea, Feldman developed the residential building at 505 West 19th Street which includes two, ten-story towers on either side of the High Line between Tenth and Eleventh Avenues. Portions of the new building also go under the High Line.

As of Monday afternoon, city records still showed one 4,595-square-foot retail space owes the city $428,200. A second retail space of 6,032-square-feet was uncredited for $353,300. A source familiar with the transaction provided payment receipts for $573,635 for these lots. (As of Monday the balance was also zero.)

A small storage area under the High Line also owes the city $2,366 but was not included in this year’s lien sale.

To be pulled from the future lien sale, owners must sign a payment agreement with the city but any arrears accrue interest every day until the taxes are paid.

If no minimum payment is made or a payment plan isn’t signed with the city, the liens will be sold in bulk, resulting in a surcharge and more interest.

The lien buyer will then collect the past due amounts and at some point, if payments are not made, they have the right to foreclose on the property.

A Feldman entity paid $8.1 million for both commercial condominium spaces in 2017, taking out a $20.5 million mortgage with Malverne Federal Savings Bank.

Update: An original version of this story said that HFZ had not provided a record of payment; Commercial Observer has since seen the documents correlating to the amounts due. When the original story was published city records did not reflect payments.