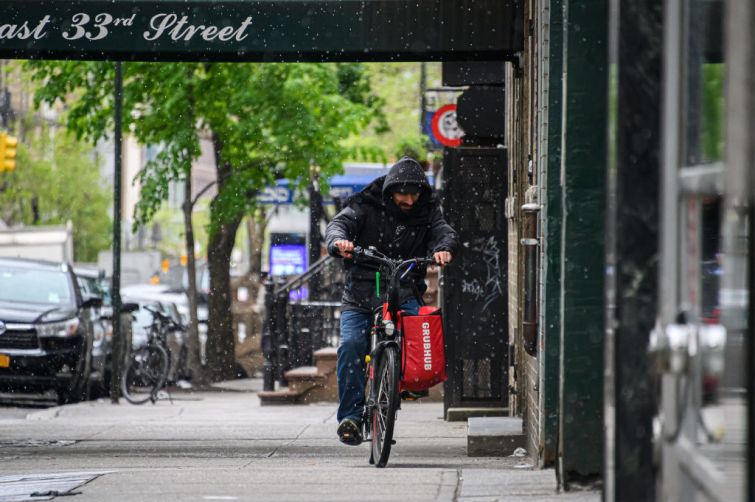 The New York City Council threw a lifeline to restaurants struggling during the coronavirus pandemic and passed a bill that would cap the amount of fees apps like Grubhub and Uber Eats can charge them at 20 percent per order.

The bill, passed today by the City Council, limits the fees the third-party apps can charge during state-ordered emergencies — such as the coronavirus pandemic — and 90 days afterward. Companies that still charge eateries more than 20 percent will face fines up to $1,000 daily per restaurant, according to the bill.

“Mom and pop restaurants across New York City are being bled dry by billion-dollar tech companies,” Queens Councilman Francisco Moya, who introduced the bill, said in a statement. “Exorbitant fees from third-party food delivery services threatened restaurants before the COVID-19 outbreak but like so many other issues, this crisis has amplified and expanded that inequity to devastating effects.”

An earlier version of the bill capped the fees at 10 percent per order but it was modified to the current 20 percent over fears companies like Grubhub would lower worker’s wages to offset the cost, Eater New York reported.

Spokespeople for Grubhub and Uber did not immediately respond to requests for comment.

Emergency orders put in place in late-March to slow the spread of the coronavirus forced New York City restaurants to switch to take-out or delivery only models. The restrictions cut into many eateries revenues in an industry already dealing with tight margins to survive.

A March report from the New York City Hospitality Alliance found that restaurant, bar and nightclub owners expected to lay off or furlough more than 67,650 workers during this time.

The legislation capping delivery fees was part of a five-bill package the City Council passed today aimed to help restaurants survive the pandemic.

“Small businesses and restaurants are the heart and soul of New York City and right now, they are hurting,” Council Speaker Corey Johnson said in a statement. “They are paying high fees, getting harassed and are worried about losing their homes. They need help and this small business package is designed to protect them during this pandemic.”

Another bill prevents delivery platforms from charging eateries for telephone calls that did not result in an order, a practice one restaurateur told the New York Post cost him nearly $2,000 last year. The legislation carries a $500 fine per violation for the practice.

The other bills passed suspended sidewalk cafés fees until February 28, 2021, one that cuts personal liabilities in leases for certain businesses and another which allows the city to charge a $10,000 to $50,000 civil penalty for landlords who harass commercial tenants over COVID-19 impacts. It would not change a tenant’s obligation to pay its rent or landlords’ ability to evict them in the future, according to the bill.

The bills still need to be signed by Mayor Bill de Blasio before they go into effect, but the mayor expressed his support for capping the third-party fees at a press conference yesterday, Eater reported.

“We want to make sure people are treated fairly,” de Blasio said. “[The city council] saw something that wasn’t fair to everyday people going through so much, and I think it’s smart legislation so I will support it.”