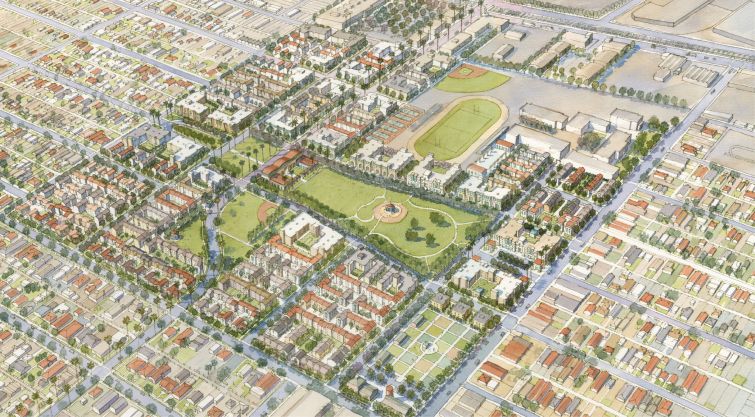 The larger 119-acre mixed-use project by The Housing Authority of the City of L.A. is located at 9800 Grape Street. Courtesy of Bridge Housing.

The larger 119-acre mixed-use project by The Housing Authority of the City of L.A. is located at 9800 Grape Street. The 92 units will support low-to-moderate income families earning between 30 percent and 80 percent of the area’s median income, according to CIT. The units will range from one- to four-bedrooms in size, and 17 of the units will also be designated for residents with disabilities and hearing or visual impairments.

The apartment complex is the third phase of the larger mixed-use development slated to be complete in early 2022. It will include about 710 new residential units, more than 120,000 square feet of retail space, and a 50,000-square-foot community center. The Michaels Organization and nonprofit BRIDGE Housing are the master developers, and Primestor Development is behind the retail portion.

The initial groundbreaking was in 2017, but the full project has been in the works for decades. Initial funding stems from L.A.’s $5 billion housing plan from 2008.

“During these challenging times, our communities need affordable housing more than ever,” said Steve Solk, president of consumer banking for CIT, in a statement. “Our financial commitment to the Jordan Downs Apartment Project will help break down barriers and spark transformative change across the Watts neighborhood.”

The neighborhood of Watts has been at the center of L.A.’s turbulent civil rights history, and the Jordan Downs redevelopment has been a focal point for what has been largely considered a consistently underserved part of the region.

CIT anticipates making more investments in the community later this year, including possibly opening a new branch in the area, the firm said. CIT Bank is a subsidiary operated by CIT Group, a financial holding company.

CIT Bank has been active throughout the country as well as in Southern California the past year. For example, in February, CIT Bank provided $30 million to refinance the Rancho Las Palmas Shopping Center in Rancho Mirage, Calif.