Will the mixed-use redevelopment galvanize commercial growth in Watts? 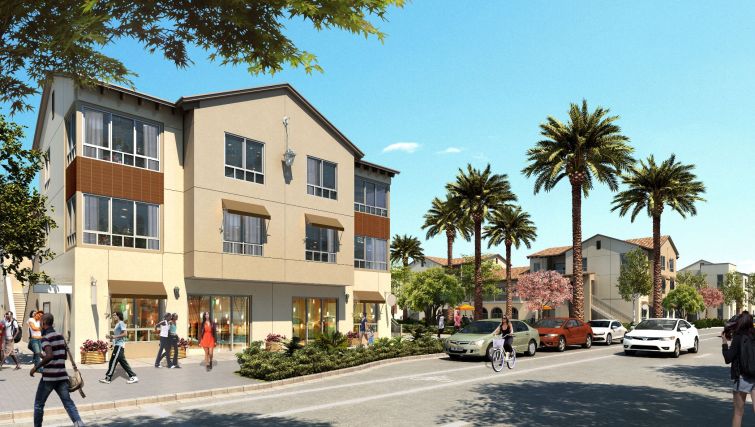 Jordan Downs in South Los Angeles looms large in the national consciousness as an example of urban woe—the public housing project in the neighborhood of Watts served as the flashpoint of violence during both the 1965 Watts riots and the 1992 Rodney King riots, as well as was an epicenter of gang violence. But, if the long-harbored hopes of city leaders, including Mayor Eric Garcetti, and developers come to fruition, the redevelopment of Jordan Downs may be a key component in revitalizing the typically underserved community.

The redevelopment of the property at 9800 Grape Street is a cornerstone of L.A.’s $5 billion housing plan that was launched in 2008. The Housing Authority of the City of Los Angeles (HACLA), in conjunction with residents and a broad spectrum of community stakeholders, initiated a plan to rebuild the community into a mixed-use, mixed-income development with new homes, jobs, parks and community facilities. The plan also includes a comprehensive “human capital plan” to provide family support, job training and community programs for residents to move toward self- sufficiency.

HACLA’s vision involved turning Jordan Downs into an urban village replete with green space and retail amenities that could serve as a national model for how public housing could be reimagined. HACLA named The Michaels Organization and the nonprofit BRIDGE Housing as the master developers in 2012, with Primestor Development, a L.A. company with a history of work in underserved areas, charged with the development of the more than 120,000 square feet of new retail space.

According to current plans, the World War II-era complex is one of four public housing projects in Watts to be turned into a modern, 119-acre mixed-income, mixed-use urban village. Fully built, it will be comprised of at least 710 new apartments and townhomes (though the plan is to double the amount of available units), nine acres of green space and a 50,000 square-foot community center. A grocery store, shops and restaurants on Alameda Street and Century Boulevard, which will be extended by a half-mile to connect Jordan Downs to the rest of the neighborhood, are also part of the master plan. Rumor has it that a Nike store is among the retail offerings being considered. (Primestor would not confirm any tenant details as of press time.)

The revitalization of Jordan Downs has been in the works for a decade and its journey has been fraught even by the typical difficulty of affordable housing redevelopment standards, Jenny Scanlin, the director of development of the Housing Authority of Los Angeles, told Commercial Observer. First, there’s the understandable ongoing public distrust of public housing redevelopment given the way that the Housing and Urban Development (HUD) department under Hope IV operated, “where you basically came in and you relocated all your tenants and then you demolished everything and started from scratch.” (HOPE IV program combines rental assistance with case management and supportive services to help very low-income, frail, elderly persons remain in an independent living environment and to prevent their premature placement in nursing homes, according to the HUD website.)

To prevent such wholesale displacement, HACLA purchased a 21-acre industrial site for $31 million adjacent to the site, according to The Los Angeles Times. Originally estimated to cost $5 million to clean up contaminants from the former steel mill site, the effort ended up costing around $31 million and involved filing suit against the property’s previous owners, which included PCC Technical Industries and GK Technologies. (The details of the settlement, reached in 2017, were not disclosed.)

Then there is the “jigsaw puzzle” of patching together funding sources of the 10-year, multi-stage project.

“It would be fantastic to see this happen dramatically, but the hard reality is developing in Watts versus developing in downtown [Los Angeles], you’re not going to have five cranes out doing 70-story buildings,” Scanlin said. “So, it has its own timeline, but it’s a timeline that ultimately serves us well because it will be well-integrated into the community. If we could do it faster, we’d do it faster, but you have to sort of inch along with the funding sources and since we are building in affordable housing into all the phases, we are reliant on tax credit financing, which is our primary tool.”

A ceremonial groundbreaking held last June, which drew Garcetti and other officials and community stakeholders, ushered in the first phase of new residential construction at Jordan Downs developed by BRIDGE Housing, which will consist of 115 affordable rental apartments in 12 buildings on 3.15 acres. The first 115 units will be reserved for tenants who earn 50 percent or less than Los Angeles County’s median income, which is $64,30 this year, according to Curbed LA. Of those units, 72 will be reserved for current residents, and their rents will not increase, according to Scanlin.

Phase 1B, shepherded by the Michaels Organization, will break ground this June. That portion of the project was recently awarded $13 million in grant funding, according to an official company statement. The grant, part of $35 million in funds received by HACLA from California’s Cap-and-Trade program, will provide funding for 81 new apartment homes, affordable to families earning up to 50 percent of the Area Median Income.  Michaels announced it will receive $50,000 in additional grant funds to support neighborhood bicycle safety programs and $1.3 million for a new neighborhood park that is being created on the site in the important and historic neighborhood of Watts.

The commercial component will begin in the second quarter of 2018 with tenants announced over the summer, according to Arturo Sneider, the CEO and co-founder of Primestor. He partnered with Nadel Architects for the design, Davies Associates for graphic design, signage and branding and David Schneider of Fong Hart Schneider + Partners on landscape and hardscape work for the project, which is expected to cost in the $40 million range.

While he could not directly name retailers, Sneider said his company was able to get everything on the Watts community’s “wish list.” These include a full-service supermarket, financial institutions, sit-down restaurants, café s and nationally branded apparel—amenities Watts and other underserved communities his firm has focused on, have typically lacked.

“Basically, the other thing our projects have found over the years is that there is really no interaction for the communities in terms of being sort of a town center that is a well-designed place to be and not just feel rushed or unsafe in any way,” Sneider said.

In Watts, he said, poor urban design by either intention or accident has hindered the development of such an urban center.

“If you look in the grid, we’re putting Century Boulevard in,” he noted. This is a street that should have connected east and eest decades ago and the reality is that it’s just being done now.”

The redevelopment and creation of new commercial projects in Watts is long overdue. The area has the largest amount of public housing west of the Mississippi, and Jordan Downs—one of the largest—housing 2,100 people, according to KCET television station—has typically netted more in the way of empty promises than actual private development dollars. Some of that has started to change, with folks like Roy Choi, the chef behind Kogi BBQ food truck fame, opening an affordable branch of health-oriented fast food restaurant LocoL on 1950 East 103rd Street in 2016, but it’s been slow- and small-going.

Scanlin described it as a “chicken and egg quandary.”

While banks and private investors don’t officially redline, they are averse to invest in new development where there isn’t a track record of development.

“These communities are the ones that really need investments, but people don’t want to invest if they don’t see anyone else investing so then nobody invests. It’s a really vicious cycle that’s a zero-net gain for the community,” she said.

The higher cost of development and construction in areas with higher crime stats like Watts and lower rates of return given the average asking rents have also been deterrents to private investment.

Those spearheading the effort at Jordan Downs hope that its revitalization becomes a major impetus at turning the tide.

“To really strike gold in any of these underserved communities or even just to push the needle in terms of bringing true amenities to the community, you have to have a catalytic project,” Scanlin said. “You have to have a big bang. You have to have somebody coming in to make a sizable investment. That’s one thing we have been able to do with Jordan is really provide hopefully that catalytic moment where we’ve put enough public dollars in, we’ve made a strong enough investment to say we’re going to see this through all the way. The tide hasn’t turned yet, but the private dollars have started to come in in a much more reasonable manner than we’ve seen before.”