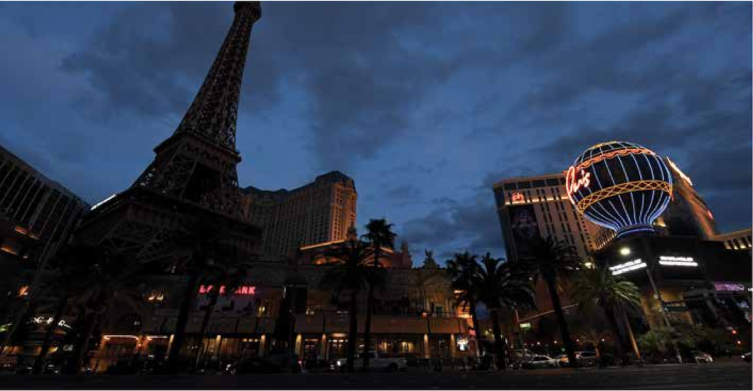 NO DICE: The spread of coronavirus effectively closed down Las Vegas and its famed casinos in mid-March.

One would be willing to wager that Las Vegas, a town that lives and breathes hospitality, would be doomed in a total shutdown from a global pandemic.

But, as it turns out, that’s a sucker bet. In a city that likes the gamble, a number of the major Las Vegas property owners and investors have been more conservative than in the past, establishing a position to ride out a temporary shutdown. Partly because of the lessons from the Great Recession in 2008, which was agonizing for Sin City, the top players have made safer bets and built larger chip stacks to last through a cold deck.

In recent years, firms like Blackstone went on multibillion-dollar buying sprees over a few months’ span. In 2018, the city experienced the highest year-over-year multifamily rent growth in the nation, and last year Las Vegas office vacancy hit its lowest point since 2007. And, pandemic or not, another record-breaking merger with Caesars Entertainment and Eldorado Resorts is nearing completion.

“Lenders in the environment leading up to recent weeks were sitting in a relatively healthy position given the trajectory of the economy, the stability of cash flow, and the reasonable performances commercial properties were turning out year after year,” said Brian Gordon, principal at Applied Analysis.

This is not to say that Vegas isn’t suffering, or that this is sustainable. Like most other states, the spread of coronavirus has shut down casinos and all nonessential businesses in Nevada and effectively closed down Las Vegas, as of March 18.

Las Vegas is home to more than 150,000 hotel rooms and hundreds of casinos — all of which are empty today. Many major events, like CinemaCon, the National Association of Broadcasters Show, and the International Council of Shopping Centers’ RECon event, have either been cancelled or postponed.

But while many events and deals will be canceled, the long-planned merger between Caesars and Eldorado is moving forward, just at a later date, according to media reports. The $17.3 billion deal has been pushed to June, CNBC reported last week, and both companies are in a position to survive the downturn; Caesars has $3 billion in liquidity on its balance sheet.

The deal had momentum leading up to the coronavirus outbreak and the firms secured financing from 11 banks, according to CNBC. “The deal was constructed with a balance sheet to survive a crisis, with ample liquidity and no debt maturities until 2024,” a source told CNBC. Caesars declined to comment for Commercial Observer, and Eldorado did not return requests for comment. If successful, the new entity will be the largest gaming operator in the country.

Which isn’t to say that things couldn’t change, or that actually closing a deal like the Caesars-Eldorado one won’t require some  outside-the-box thinking.

“I am of the belief that this deal, if it happens, they’re going to have to be creative,” said Marcus Threats, CCIM with the national hospitality group for Marcus & Millichap, who added that it would be prudent for the parties to push pause on the merger, if it should even take place at all.

Other trades are hitting the headlines since the shutdown, though they could signal trouble. Penn National Gaming sold the Tropicana for $307.5 million last week, according to media reports. The price is about $52.5 million less than it paid just five years ago. The buyer was Gaming & Leisure Properties Inc.

As operators like Penn National Gaming and MGM teamed up with real estate investment trusts in sale-leaseback transactions, the operators became liable for rent payments, protecting the REITs from liability, whether the properties are open or closed.

That’s similar to the setup that Blackstone took. On Valentine’s Day, MGM Growth Properties and BREIT closed a joint venture and leaseback agreement for the MGM Grand and Mandalay Bay — valued at $4.6 billion. MGP will own a majority 50.1 percent of the joint venture and BREIT will own the remainder. The two properties combine for 9,743 rooms, approximately 3 million square feet of meeting space, and 300,000 square feet of casino space.

The deal was announced three months after Blackstone said it acquired 95 percent ownership in the $4.25 billion Bellagio deal. Blackstone was betting big — the two deals combine for $8.85 billion in value over the span of about four months.

MGM Resorts International — the largest operator of casinos on the Strip — will manage, operate and be responsible for all aspects of the properties on a day-to-day basis, with the joint venture owning the properties and receiving rent payments. With MGM providing a full corporate guarantee on rent payments, the initial annual rent for MGM Grand and Mandalay Bay will be $292 million.

Thanks in part to strategies with corporate guarantees, and the fact that Blackstone finished 2019 with $151 billion in dry powder, it is also confident they will be able to weather the pandemic storm.

“Despite the near-term disruption, we are confident in the strength of the Las Vegas market,” said Tyler Henritze, head of Americas acquisitions for Blackstone, in an email to CO. “We are long-term investors and have operated through numerous challenging market cycles; we look forward to continuing to invest in compelling opportunities and reopening our properties as soon as it is safe to do so.”

On the other side, the deals to sell ownership in prized properties are part of MGM’s “asset light” strategy, in which the company takes advantage of growing land values while still operating the properties. For example, MGM also recently sold Circus Circus Las Vegas to billionaire Phil Ruffin for $825 million.

“MGM is sitting on a bunch of cash right now. I’ve got to give [CEO] Jim Murren a lot of credit right now, he saw this coming in one form or another, so they’re sitting on a whole lot of cash, and I think they’ll be fine,” Threats said.

Still, the company has experienced high cancellations and substantial operating losses in March, and does not expect to see improvement until more is known about the duration and severity of the pandemic, MGM said in a company statement. “While this will undoubtedly have a significant negative effect on our business in the near term, we are well-positioned to emerge from the current crisis in light of our strong liquidity position and valuable asset portfolio,” said Bill Hornbuckle, acting CEO and president of MGM Resorts, in the statement.

The firm is also reviewing hiring freezes, furloughs and “other headcount reductions.”

Three banks were part of the financing for the Bellagio deal, one of 2019’s largest single-asset/single-borrower CMBS deals. Morgan Stanley, Citigroup and J.P. Morgan Chase lent $3 billion to fund Blackstone’s acquisition of the interest in the Bellagio resort, CO reported. Blackstone is the fee simple owner and earns lease payments starting at $245 million, which will increase 2 percent per year for the first 10 years. Blackstone will pay a fixed 3.67 percent interest rate on the 10-year debt, with no principal payments due until the loan matures.

Shlomi Ronen, founder of Dekel Capital, told CO that lenders in Las Vegas have been a lot more conservative in their underwriting assumptions than in the past.

“Lenders were still relatively cautious in Vegas relative to other markets we were active in,” he said. “Pre-coronavirus, they were on very solid ground.”

Gordon said the economic climate in Southern Nevada leading into the coronavirus outbreak was much more stable and sustainable than it was in the early-to-mid 2000s when the Great Recession took hold. But some of the same structural dynamics exist with an economy based on tourism, and that the empty hotel rooms will take some time to absorb in the marketplace once things start to open up again.

“Southern Nevada is being impacted by COVID-19 to a pretty significant extent,” he said. “It’s not unlike other parts of the country and the world, but given Las Vegas’ tourism-dependent economy, and the shutdowns that are currently in place, the market has hundreds of thousands of people who aren’t going to work because their businesses are closed. The structure of the Southern Nevada economy is a little bit different than most other markets in the country, so there’s the potential for some pretty significant harm on a long-term basis.”

Some sectors outside the strip will surely still take big hits, and there is a complex mess to untangle. Mark Nicoletti, partner at Allen Matkins, has a client with three office properties in Las Vegas. He said when Nevada Gov. Steve Sisolak issued a moratorium on evictions, his client received notices from every tenant that they will not pay rent. They’re leveraged with a CMBS loan and a balance sheet loan.

“There’s no moratorium on lenders collecting, so it’s becoming very difficult to figure out exactly what is going to happen,” he said. “Our best bet is that lenders are going to have to take all of this into consideration or the Fed is going to have to come download and impose some legislation…All of the sudden, come mid-April, almost every bank is going to have underperforming or defaulted properties which creates a reserve problem.”

Vicky Schiff, founder of Mosaic Real Estate Investors, said the negative impacts will be similar in Las Vegas as to other cities around the world. Mosaic is involved with two projects that are under construction and one that just finished construction, but now the date for it to open is unknown because of the shutdown.

But Nicoletti and other experts told CO that the Las Vegas economy is in better overall shape now to withstand the shutdown. He also said he doesn’t see this shutdown as having any over-leveraging issues. “I think that’s the big difference that we have between 2008-2009 and today. Back in 2008-2009, there was a lot of over-leveraging,” he said. “I’m much more optimistic for recovery here than I was in 2009 because we don’t have a systemic failure of the financial markets.”

That’s why Ronen doesn’t expect Las Vegas to be hit any differently than other cities.

“I don’t think it’s in a place where we’re going to see a repeat of the last cycle where they got hit harder than anybody else,” he said. “They’re economy is different today than it was ten years ago … I don’t expect you’ll see a concentration of distress in Vegas like you did last cycle.”