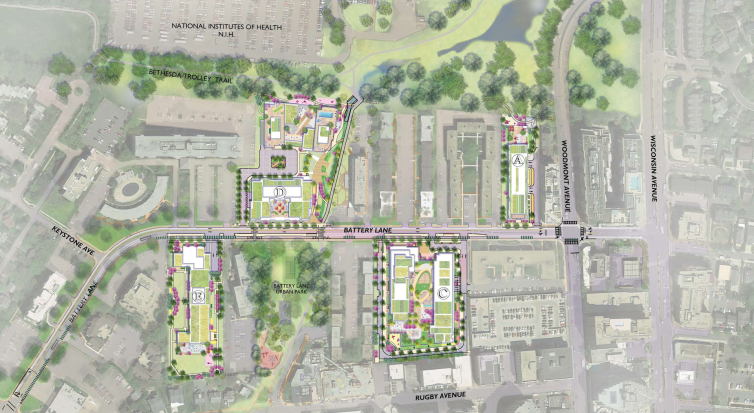 Brown Development has received the green light to redevelop five aging apartment buildings in Bethesda’s Battery Lane District, according to the company.

Brown Development foresees site plan approval on the first building happening later this year with construction projected to start in 2023.

“Improvements in our concept are designed to create a much nicer streetscape, enhance the connectivity to the rest of Bethesda and focus on the Trolley Trail and the urban park as the centerpiece of the neighborhood,” Doug Wrenn, senior vice president at Aldon Properties, the development arm of parent company Brown Development, told Commercial Observer. “I think everyone will benefit from the improvements.”

According to Wrenn, all of these garden-style apartments were constructed more than 50 years ago and will be redeveloped via a rolling, phased approach over the next decade.

There’s a 10-year horizon on the approval, which is much greater than is typically granted to an individual space in Bethesda. According to Wrenn, the redevelopment team chose to start with the older buildings built in the ’50s, which he said would improve the area and benefit the entire Bethesda neighborhood.

“We’ve been working on this for many years, and we could have gone and looked at each individual site one at a time, and submitted applications just for one site,” Wrenn said. “We thought it would be better to take a comprehensive approach and include as many sites as we could so there would be some certainty about what our vision was for the entire corridor for that neighborhood and we could implement it over a number of years.”

The improvement plan includes the addition of an enhanced tree canopy along Battery Lane, a new community gathering space and greenway along the Bethesda Trolley Trail, and a two-way walking and biking path that will be separated from traffic by a median.