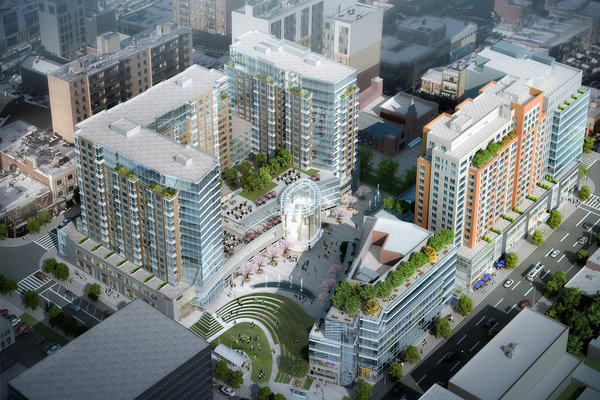 Citigroup has provided a $28 million fixed-rate loan for Thor Equities’ purchase of a retail condominium at Flushing Commons in Queens, Commercial Observer has learned.

“Downtown Flushing has a thriving central business district and we see tremendous opportunity in the desirable market,” Joseph Sitt, Thor’s founder and chairman, said in a statement. “After turning our attention towards building our Thor Sciences and ThorLogis platforms, we are excited about our first retail acquisition in New York in nearly five years.”

The property is part of the 1.8-million-square-foot Flushing Commons development at the corner of Union Street and 39th Avenue in Queens, and part of a two-phase, master development that is set to include a 1.5-acre open-air plaza. Phase one was completed in 2017 and includes 30,007 square feet of retail space, a 17-story apartment tower and a 13-story office tower.

“Downtown Flushing is a market with impressive transportation options to justify heavy retail concentration,” Stolly said in prepared remarks. “Between more than 20 public traffic options and multi-cultural dining and services, the area is a natural nexus for customers. The Main Street subway station sees more than 19 million riders a year and is one of the busiest stations in the city. The Main Street and Roosevelt avenue intersection is the third busiest in the city after Times Square and Herald Square.”

Roeschlaub added: “Interest in this market continues to grow. The property is surrounded by several new developments including the Tangram development, Sky View Parc and the Farrington. There are about three million square feet of additional developments in various stages of planning in Flushing coming down the pipeline in the next five years.”

Thor, Citi and NKF teamed up in August last year, too. Citi provided a $91 million CMBS loan to the owner for its $152 million acquisition of the New Jersey Center of Excellence — a life science campus in Bridgewater, N.J. — in a deal negotiated by the same NKF team.