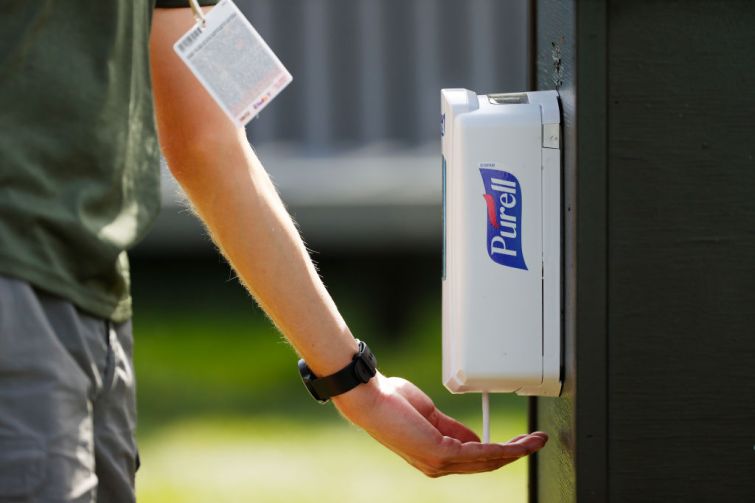 ORLANDO, FLORIDA - MARCH 05: Purell hand sanitizer is used during the first round of the Arnold Palmer Invitational Presented by MasterCard at the Bay Hill Club and Lodge on March 05, 2020 in Orlando, Florida. Kevin C. Cox/Getty Images

As the novel coronavirus continues to spread in the United States, real estate companies in New York are doing their best to continue business as usual while still instituting some precautionary social distancing policies to slow the spread of the disease.

At the large brokerages in the city, international and non-essential travel has been cancelled, events have been indefinitely postponed, meetings are being conducted via video, and hand sanitizer is flowing like water, according to conversations with employees and spokespeople at the companies.

As of yet, few brokerages have changed their work-from-home policies, except for people who are feeling unwell or have traveled internationally. However, both Compass and Cushman & Wakefield are encouraging employees to take their laptops home at night in case they need to remain there for a period of time. Compass has closed its office in Seattle, the city that experienced the earliest outbreak and community spread in the U.S.

Some companies are getting creative. At Newmark Knight Frank, the firm has stationed a nurse at the main check-in at the company’s offices at 125 Park Avenue who is checking visitors and employees for fever, a spokesperson for the brokerage confirmed.

“We’re just going above and beyond what the CDC is recommending,” the spokesperson said. “It’s an extra precautionary measure.”

At C&W, meetings are limited to 10 people and all corporate events on- or off-site are canceled because of the 10-person rule, while Ariel Property Advisors has recommended that employees commute during off-hours to avoid crowds on public transportation.

At TerraCRG in Brooklyn, employees were given the option of remaining at home, but the office was at its normal capacity on Monday, a spokesperson said, while Hodges Ward Elliott is continuing business as usual.

“Everyone is working from the office,” an executive wrote in an email. “Just trying to be clean.” At Reonomy, a real estate data company with a flexible work-from-home policy, its Midtown office was at 70 percent capacity on Monday, per a Reonomy spokesperson. Last week, developer Georgetown Company ran a two-day dry run, where all employees worked remotely, according to an executive at the company.

As for events, there is a range of policies. Avison Young will not attend MIPIM’s rescheduled conference in June, according to a press release, while Related Companies has not discouraged its employees from attending industry events, according to someone with knowledge of the matter.

However, as the situation evolves, all of this can change, and companies are preparing for a situation in which there would be a mandatory work-from-home order, or if someone at their office tests positive for COVID-19.

After a Brookfield Properties employee tested positive for the virus on Sunday, the company announced that the office, at 250 Vesey Street, would remain open. Only those who worked on the same side of the floor as the sick employee were asked to remain home, along with anyone feeling ill, or had a compromised immune system. The firm noted it was sanitizing common areas every two hours and is deep cleaning one of its floors.

However, New York Magazine staff inside the same building were sent home “out of an abundance of caution,” Women’s Wear Daily reported. Their office will be shut until March 12 so that the space can be cleaned and disinfected.

The wide range of responses to the virus is in line with the general confusion over the extent of the threat.

The guidelines from the Centers for Disease Control, as well as from city and state officials, are, for the most part, common-sense recommendations like hand-washing and remaining at home if you feel sick. Though it is not mandated, the CDC has recommended taking preventative steps, such as cancelling public events and working from home, in order to slow the spread and not overwhelm the health system.

Meanwhile, New York instituted a state of emergency and issued a lockdown notice for a one-mile area in New Rochelle, in an effort to contain the state’s worst outbreak, a cluster of cases tied to a lawyer.