LA Imposes Rent Freeze on Most of Its Apartment Stock 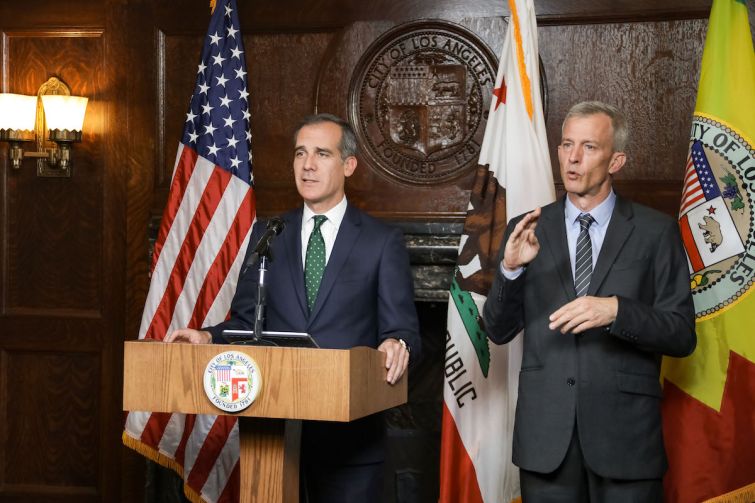 With a shut down city, Los Angeles Mayor Eric Garcetti on Monday continued his wave of emergency measures to protect tenants, this time by freezing rent increases for a majority of the city’s rental units and extending a moratorium on evictions.

The announcement follows a press conference last week in which Garcetti announced he supports freezing rents statewide. Now, with more than 2,470 total cases of the coronavirus in L.A. County, Garcetti announced the order suspending new rental increases on units that fall under the city’s Rent Stabilization Ordinance (RSO), which includes 624,000 units in 118,000 buildings.

“Up until today, rents in those units could be increased only up to 4 percent annually,” Garcetti explained. “But as of now, those increases are put on hold by this order until after this emergency period is over. … Rent will stay the same.”

Average rent in L.A. reached $2,524 in February, according to RENTCafe.

Councilman Mike Bonin applauded the action on his Twitter account, and said lawmakers “still need to go further to meet this moment.” He and Councilman David Ryu are still pushing for a “national or statewide suspension of rents and mortgages to help people survive and not lose their homes.”

“The Mayor’s action today will save thousands of renters and working families in Los Angeles from a rent increase that is unfair, unjust and unconscionable during this pandemic,” Ryu said in a statement. “I am going to continue working to freeze all rent increases across the city of Los Angeles, suspend rent and mortgage payments across California, and protect the working families and small business owners that are the backbone of our economy.”

Richard Green, chair of USC Lusk Center for Real Estate, said it was a sensible move, but he doesn’t think freezing rent will have much consequence due to the circumstances with the statewide shutdown.

“In the end, I don’t think it’s going to matter very much because I expect rents to fall over the next year anyway,” Green told Commercial Observer. “So I don’t think this is going to be very binding on anybody. Rent will fall after demand falls because of the outbreak, and people won’t have money. … I don’t expect anybody to raise their rent in pretty much any part of the market over the next six months.”

Daniel M. Yukelson, executive director of the Apartment Association of Greater Los Angeles, released a statement opposing the measures, saying not enough is being done for landlords. Yukelson argued against Garcetti’s measure because it also revokes previously scheduled increases for tenants that are not facing financial hardships due to the coronavirus.

“Rental property owners already face an extraordinarily unfair share of the financial burden related to the virus,” Yukelson said. “We already can’t collect rent, but must continue housing those who can’t pay. Now, even small scheduled rent increases for tenants facing no financial hardships whatsoever are banned. Property owners are not public ATMs. … At what point does the city of Los Angeles provide any level of assistance to mom-and-pop property owners in danger of permanently losing their livelihoods?”

Garcetti also signed an emergency order approved by the city council that extends his original moratorium on evictions for commercial and residential tenants. Under the new measure, residents who can’t pay rent due to the outbreak will now have 12 months after the emergency ends to pay back their rent, and commercial tenants will have three months, Garcetti explained.

Green said it’s “a fairly obvious thing to do under the circumstances. It’s not even that controversial. California apartment owners have said that they don’t have a problem with not having evictions for this crisis. … Who’s going to come and rent a unit now anyway?”

He said the real issue is that people understand that rent relief doesn’t mean they don’t owe the rent, it just means they can put it off.

“If people go three months without paying rent that’s gonna be a really big issue and we’ll have to see how that shakes out.”