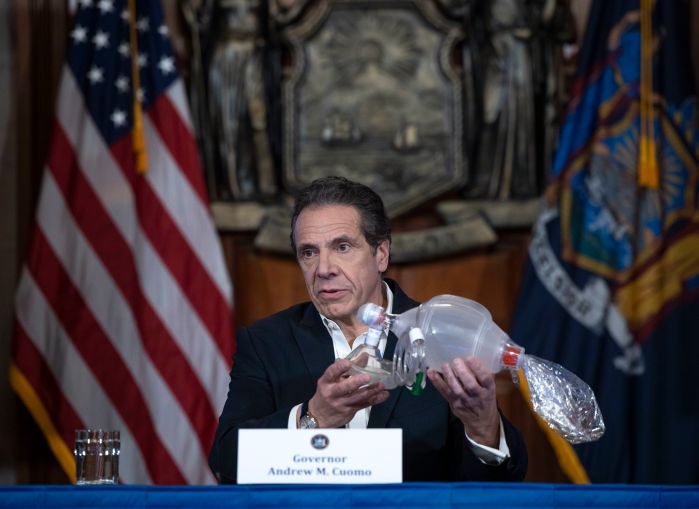 After nine years and three terms in office, New York Governor Andrew Cuomo has found himself thrust into the national spotlight as his state becomes the epicenter of America’s coronavirus pandemic.

Each day for the past two weeks, around 11 a.m., Cuomo has sat at a long table surrounded by his top advisors — and occasionally his oldest daughter — and offered New Yorkers an update on the number of new COVID-19 cases in the state and how his administration is handling the crisis. On the morning of Friday, March 27, 44,635 New Yorkers had tested positive for the virus, with 6,481 people hospitalized.

On Thursday, Cuomo didn’t just deliver those statistics in his signature PowerPoint format, but he also talked about his search for venues in New York City that could hold additional hospital beds once the hospitals become completely overwhelmed by coronavirus patients. He said that the state had received approval to use a technology that allowed hospitals to split a ventilator and use it for two different patients. He even waxed philosophic about fear and stress and how people behave in times of crisis.

On Wednesday, March 25, he echoed a speech given by his father, the late Gov. Mario Cuomo, to highlight what makes New York special and what has made it uniquely vulnerable to the virus.

“Why does New York have so many more cases than any other state?” Cuomo said during his morning briefing in Albany. “Two answers. Answer one is that we welcome people from across the globe. We have people who came here from China, from Italy, from across the globe. And I have no doubt that the virus was here much earlier than any other state. The second answer is, because we are close. Because we live close to one another. We have one of the most dense, close environments in the country. Our closeness makes us vulnerable. But it’s true that your greatest weakness is also your greatest strength. Our closeness is what makes us who we are. Our openness is what makes us special … It’s what makes us so accepting of one another. The closeness is that New York humanity that I think exists nowhere else.”

The format of the governor’s speeches and PowerPoint presentations has even become more refined over the past several days. After he delivers newsworthy medical or policy updates, Cuomo starts talking about how the virus has affected his relationships with his mother and his daughters. Last week, he said that he’d been calling his elderly mother more and telling her that he loved her; then he announced that the state’s new social distancing regulations and shutdown of nonessential businesses would be named “Matilda’s Law,” after her.

The real estate community seems thrilled by the governor’s actions, even if he hasn’t taken concrete steps to help landlords yet. So far, the state Department of Financial Services has issued guidance “urging” mortgage servicers not to penalize borrowers who can’t make payments for reasons related to coronavirus, but the memo does not have legal force. However, the state has required residential mortgage servicers to allow homeowners to defer mortgage payments for 90 days if they can demonstrate financial hardship because of the pandemic.

Marty Burger, the CEO of Silverstein Properties, said that the governor has been “acting very presidential. I think he’s been very calm and giving everyone a dose of the facts with some of his personal opinion.” On the topic of commercial mortgage relief, Burger said that the governor “hasn’t dealt with it because that’s not an immediate issue … but landlords shouldn’t bear the economic brunt of [the pandemic]. How are they going to pay their building service workers, their electricity, their debt service?”

Jordan Barowitz, a spokesman for The Durst Organization, wrote in an email, “Obviously [Cuomo’s] been doing a great job leading the state. There haven’t been huge real estate issues relative to other issues.”

Cuomo’s daily briefings have become so popular that MSNBC and Fox News now broadcast them nationally. Many people outside New York have begun tuning in, too, realizing that the governor delivers facts about the virus in an accessible, easy-to-digest way. His social media following has also expanded: His Twitter following has grown from 863,000 to 1.1 million users over the past three weeks, and his Instagram following has swelled 64 percent, from 56,000 to 92,000, according to Politico New York. His daily press conferences even inspired self-quarantined Brooklynite Rebecca Fishbein (a friend of this reporter), to write a blog post on Jezebel headlined, “Help, I Think I’m In Love With Andrew Cuomo???,” which resulted in her receiving a call from the governor himself.

It helps that his slideshows often have an instantly meme-able quality. One slide from last Friday that was widely circulated on Twitter read, “YOUNG PEOPLE NOT COMPLYING WITH SOCIAL DISTANCING: YOU ARE WRONG.”

Cuomo does seem to be following the same trajectory as former Mayor Rudy Giuliani, who  became known as “America’s Mayor” in the aftermath of Sept. 11. #PresidentCuomo was even trending on Twitter over the weekend.

The governor is known for his confrontational and bullying style, but those decisive qualities are some of the same traits that help him seem effective in a crisis.

“The reasons he may not have gotten along with others before are why he’s the leader we need now,” said Susan del Percio, a Republican political consultant who worked as an adviser to Cuomo in 2014. She added that his 30 years of government service — which include stints as the secretary for Housing and Urban Development under President Bill Clinton and as the state attorney general — helped him “understand government and what it can do from the inside. He knows what he can and cannot do [as governor] and he knows how to execute.”

She added that Cuomo was filling a leadership void for New York City residents on two levels, both municipal and federal.

“They feel much more confident trusting Cuomo over de Blasio … Like, when de Blasio went to the gym the day that [the state] said they were closing down the gyms.” Meanwhile, President Trump “constantly repeats false claims.”

The cable news networks have started carrying the New York governor’s press conferences because “people, even if they’re in other states, are getting more information from him than they are from the federal government,” said del Percio.

Longtime New York Democratic political consultant Hank Sheinkopf argued that it was Cuomo’s ability to inject his personal story into the crisis that has made his briefings so compelling.

“He is, by nature, someone who governs by control and has a very American story to tell about his own life, his relationship to his father, his mother and his state,” said Sheinkopf. “He is America’s daddy when he talks about his daughter and he is America’s son when he talks about his mother. And his father’s rhetoric, for many Democrats, is very clear … what Mario Cuomo talked about was what was best in us.”