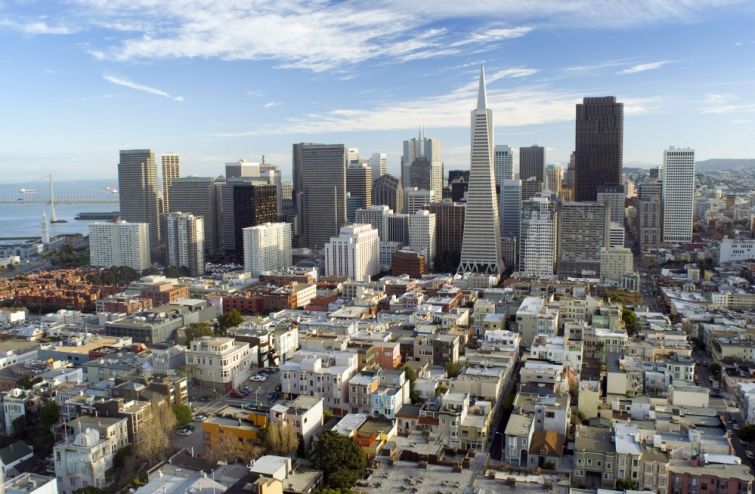 Barclays, Goldman Sachs and Wells Fargo have provided $682 million in CMBS debt to recapitalize First Market Tower, a 1-million-square-foot office building in San Francisco’s Financial District that plays host to Amazon as its largest tenant, according to ratings agency analysis.

The mortgage was provided to a joint venture between a real estate investment trust affiliated with RREEF Property Trust and the New York State Teachers’ Retirement System (NYSTRS). Philadelphia-based property management firm Knickerbocker Properties, an affiliate of NYSTRS, is the landlord and is listed with its parent as a sponsor of the deal.

The 10-year, fixed-rate and interest-only loan pays interest at a rate of 3.23 percent, according to information from Fitch Ratings, which analyzed the transaction, and is backed by the owners’ fee-simple interest in the 38-story property.

The proceeds facilitated RREEF America REIT II’s acquisition of a 49 percent interest in the building from NYSTRS, which acquired 525 Market Street in 1998, retired $244.5 million in existing debt, returned $392.2 million of equity to NYSTRS, funded $41.4 million in upfront reserves and paid $3.9 million in closing costs, as per Fitch analysis.

A representative for the NYSTRS declined to comment on the transaction or the property.

Of the $682 million mortgage, $422 million — split between $210 million in senior notes and a $212 million junior portion — is being securitized in the Barclays-led MKT 2020-525M single-asset, single-borrower CMBS deal; the remaining $260 million in senior pari passu companion notes are slated to be included in future securitizations, according to Fitch.

The property has more than 1 million square feet of office space, 14,965 square feet of retail and a few hundred square feet of storage space. And it also has a 90-space, underground parking garage leased to California Parking — which has a leasehold interest from July 2016 to July 2021.

The building is currently 97.3 percent leased to 18 tenants — 13 office tenants and five retail tenants — as of December 2019 and has registered an average occupancy of just under 92 percent over the last seven years. Fitch positively pointed to the presences of investment-grade, creditworthy tenants at the location, which make up nearly 61 percent of the building and include Amazon — the largest tenant at 39.5 percent of rentable space — Wells Fargo, which is based in the city, and a suite of insurance companies, including Zurich American Insurance Company, Willis Insurance Services of California and Allianz Global Corporate & Specialty. It is also the North American corporate headquarters of Sephora, which has leased just over 16 percent of the asset, as per Fitch. Almost 48 percent of the property is leased to tech tenants; just over 20 percent is leased to financial services tenants; over 16 percent is leased to personal care; and nearly 3 percent to legal tenants.

The building has secured almost 367,700 square feet in new leases and lease renewals since August 2018, at an effective rent of nearly $84 per square foot. This has been aided partly by renovations at the location. Over the last five years, around $102.1 million has been spent on capital improvements, including $72.1 million in tenant improvements, $4.6 million to upgrade building systems, according to Fitch, and $17.2 million to renovate the building’s lobby and plaza, which was completed in 2016, according to the property’s website.

There are three signed tenants — Amazon.com Services, software company Sift Science and restaurant Dragoneats — that have yet to move into their spaces. Amazon’s space, adding to what the company already occupies at the location, consists of four floors on a lease that starts on March 1 and an additional three floors on a lease that starts on Feb. 1 next year. Dragoneats’ started on Jan. 1 this year, and Sift’s lease begins on June 13, 2020.

Fitch said that about 80.6 percent of the property’s rentable space is in line to rollover during the life of the loan. Over 19 percent and more than 17.3 percent are set to expire, in 2025 and 2028, respectively — the highest concentrations of rollover over the term.

A representative for RREEF America REIT II did not respond to an inquiry. RREEF Property Trust could not be reached.