Pass the Joint: JV Equity Partnerships Are All the Rage [Updated]

As deals get bigger, they need more dollars. Traditional LP investors are now more keen to put their fingerprints on the real estate. 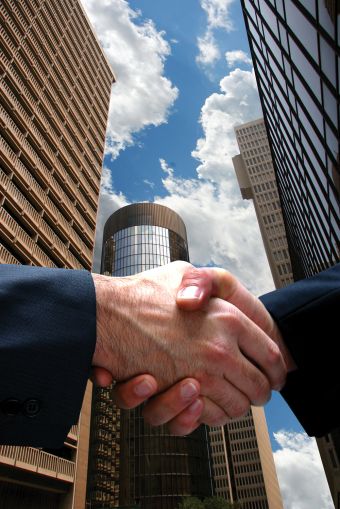 In 2019, two major investment firms split a Coke in Midtown.

It was bought by Nightingale Properties, a New York owner, and Wafra Capital Partners, a Kuwaiti-backed investor, for $909 million.

This was one of the more prominent sales in New York last year, and not just because the following month the property mysteriously changed hands yet again with New York real estate bad boy Michael Shvo picking it up for $955 million—giving a tidy $46 million profit.

It’s a testament to the allure of the JV.

Having flipped one Manhattan trophy asset, Wafra and Nightingale teamed up together again last month to purchase 111 Wall Street for a reported $175 million, according to Crain’s. (Check in later this month to see if they flipped it.)

Over the last couple years, as real estate investment has climbed to record highs, real estate market participants have realized it’s often better to join forces on the big deals, rather than go their own way.

Additionally, larger limited partner capital sources, including pension funds and sovereign wealth funds, have changed the complexion of the market by building out internal real estate teams to move toward direct investment, rather than the old guard of passive fund investment.

The search for yield in today’s slowed market has pushed joint venture equity partnerships involving seasoned sponsors to the forefront.

“The reason is [these investors] want to get closer to the product; they want more involvement and decision rights and they want to save fees,” RXR Realty president and CFO Mike Maturo told Commercial Observer. “In the JV structure, the fee structures are different. We’ve been seeing a portion of the market moving more into JV direct investment relationships with developers and sponsors on bigger deals.”

RXR partnered with SL Green Realty Corp. to purchase a JV interest in New York REIT’s Worldwide Plaza back in 2017.

“Size is always a big factor,” Maturo added. “The larger the [deal] size, the bigger the equity base you need and then you have to think about using JV capital.”

Once viewed as an alternative asset class by investors, real estate has moved into the mainstream and the money has certainly made itself visible.

Investors raised $154.3 billion in real estate private capital last year — a post crisis high — up nearly 16 percent from 2016, according to data from Preqin. That followed the $149.4 billion raised in 2018. Major institutional investment firms like Columbia Property Trust have even made their partnerships more permanent with the recent acquisition of Normandy Real Estate Partners, or Bentall Kennedy merging with GreenOak Real Estate to become BentallGreenOak.

“These funds, they’re hiring more experienced people, so they’re bringing something to the table, and from a developer’s perspective, that’s a good thing. It’s additive in that respect, which is something different,” Maturo said. “It’s just a matter of developing a working relationship.”

Developing that working relationship is key. While many investors might not be in a hurry to get locked into long-term transactions given the elongated market cycle we find ourselves in, they’re interested in establishing solid relationships that thrive through slowdowns or diversifying their platforms through consolidation.

“The entire goal is to lead to a long term marriage and partnership,” Dustin Stolly, a Newmark Knight Frank co-head of debt, equity and structured finance, said. “[Investors] are selecting their general partners based on track record, professionalism, reputation and trust. Like any relationship, they take time to come to fruition. There are always changes and complications, but it’s always about behavior during that process.”

In the case of Normandy and Columbia, the two firms teamed up on deals, such as the purchase and repositioning of 250 Church Street in Tribeca into a 235,000-square-foot, 16-story boutique office building or the pair’s ground-up development at 799 Broadway in Greenwich Village before Normandy’s acquisition by Columbia which closed last week.

“This acquisition supports our strategy to drive financial performance for investors by strengthening our capabilities across key markets, while adding a full development arm and expanded pipeline,” Columbia CEO Nelson Mills said in a statement on Jan. 27, following the announcement of the closing of the Normandy acquisition.

“We are hyper selective on the JV equity raise assignments we take on,” said Stolly of his team’s matchmaking, “and it starts with who the operator and the developer is; that group has to be reputable, having had experience, with the ability to drive institutional LP demand; they have to be good partners. We focus on where institutional capital will be attracted on larger checks of $50 million-plus. It’s really a marriage that needs to be cohesive, and the personalities need to align and return profiles need to align.”

Stolly saw the appetite for JV equity in his pipeline of deals; he estimates that 25 percent of the firm’s business last year came from JV equity sourcing and, according to an October 2019 EY analysis, private capital, overall, is out raising public markets for the first time ever.

“The CRE markets have remained on an upward trajectory, and the economy is strong; they’re mutually tied together,” Stolly said. “Similar to the lending [sphere], where there’s an [abundance] of capital to lend and lenders more disciplined in leverage and structure, there’s been a [wave] of LP capital that’s come into the market for people [these investors] trust.”

The increased desire from these institutional shops for more control over the outcome of a real estate development or business plan is an acceptable product of the crisis, Maturo said.

“Coming off of the last downturn, when they weren’t close [to the assets] and didn’t have a real pulse, they decided as a result of that and learning from it, that they needed to be managing the investment more closely, with protective rights and input into what happens,” Maturo said. “It’s a protective measure.”

Among the strategies for a successful JV, “You want to avoid bringing in capital that has different approaches to strategy; that’s a formula for a problem,” Maturo said. “You want that sense that there will be a meeting of the minds when you get to friction points.”

BentallGreenOak took a leading role when it bought Unizo Holdings’ 685 Third Avenue for $400 million in November 2019.

“[BentallGreenOak] bought that by themselves,” Stolly said. “Then, you hire a leasing manager and property manager. But a lot of [the partnership dynamic] depends on the complexity of the lifts. With hospitality, [an investor will] need an operator, but on a fully-leased office building, they might not; with an industrial building, they might only need an operating manager.”

One equity adviser who spoke to CO anonymously said that foreign JV capital is comfortable in “lighter lift deals, where they’re just allocating, coming in and partnering with well known partners. They’ll pick major markets and major partners. There’s capital in Israel seeking deals, but they don’t like recapitalizations; they want to make sure they’re not coming in at a higher price and someone is profiting off their backs. But, that’s a good source for cash-flowing deals.”

Domestically, the adviser highlighted the fact that firms like Westbrook Partners, Carlyle Group and CIM Group are investors who “can do more on their own,” they said. “Years ago, they were traditional LPs that needed an equity partner.”

Also, there were instances where “we tell operating partners to ‘go pass around a hat to friends and family,’ the high-net worth and family office [FO] capital; those guys are really smart and lot of them have hired real estate professionals to run their capital on their behalf. They have more flexibility, being in different markets and having different hold periods, and they’re making good risk-adjusted return decisions. They might offer [preferred equity] in cases where there’s not a lot of liquidity. There’s a reputation out there that somehow the FOs and the high-net worth capital wants long-term investments and not return. That may be true for country club capital, but not for groups who’ve said ‘we’re in the real estate business’ and who provide LP equity to top operating partners.”

Passive equity partners have to rely on the capabilities of a sponsor, and  so the wise new equity is looking for seasoned sponsors who know how to create value in deals, something capital can’t do on its own.

“Those [type of deals] are attractive for common equity,” said the adviser. “There’s also a lot of interest from common equity in recapitalizations… The trick with equity recaps is getting in at the right entry point, because you don’t want to pay full market price.”

Stolly said that with JV equity, “you’ll do a strategic, sniper approach when you market it. Some folks come back and say, ‘I can go to 90 percent of the capital structure,’ with 65 to 90 percent of that to be preferred equity, but that caps their upside since it’s not common equity. Some operators and developers like [JVs] because they hit it out of the park and capture upside, but some want the common partner for soft cost overruns and issues like that; most would prefer common partners.”

In the realm of foreign JV capital, Canadian investment — led by behemoths such as Brookfield Properties and Oxford Properties — still reigns supreme, given the country’s proximity to the U.S..

International capital markets professionals who spoke to CO point to a story-within-a-story when it comes to sentiment from foreign capital sources elsewhere across the globe.

While foreign investment volumes plummeted in 2019 — to $47.8 billion, from $94 billion in 2018 — volume for single-asset investments actually ticked up slightly, according to data provided by Newmark Knight Frank.

“International investors are seeking yield that is no longer available in the fixed income sector, driving increased levels of global institutional AUM to be allocated to ‘alternatives,’ and those investors are increasingly aware that direct commercial real estate investment is where those returns can be maximized,” said Alex Foshay, an NKF vice chairman and the head of international capital markets. “With hedging costs relative to the U.S. dollar falling, we expect to see a significant continued increase in direct CRE investment into the U.S. in 2020, particularly from European pension funds and Korean institutions—the two most impacted groups by elevated hedging costs over the last 24 months.”

Stolly said it’s case by case when it comes to partnering with foreign capital.

“International capital flows are constantly evolving. [Around] two and a half to three years ago, capital was pouring in from China, and that’s ground to a halt. Now, you have [investors from] Singapore and Norway,” he said. “If someone is buying a billion-dollar office on the West Coast or New York, and they’re able to identify a sovereign wealth fund or a foreign pocket of capital, they’ll explore it and get a different promote structure [in a JV deal].”

Maturo’s take is that the world has become flattened, which has led to more awareness from foreign players, who are following the same playbook to become more communicative and hands on in JV deals.

“[RXR has] partners in Asia, Europe and the Middle East, and many of them have opened up shop in New York and across the U.S., building out teams,” Maturo said. “I’d say it’s evolved over the last 10 years or so. We have Korean investors, so it’s starting to get tighter and closer and brokers have people all over the world and they’re educating people. [Each foreign investor] has their own appetites and idiosyncrasies; some are more tax focused and others are more currency focused.”

As Wafra and Nightingale might have advised (briefly): You can’t beat the real thing.

A previous version of this story indicated that Bentall Kennedy purchased GreenOak Real Estate, when the two parties actually had engaged in a merger.