A former residential hotel in Brooklyn Heights is being renovated into a high-end senior living facility with 50,000 feet of amenities. 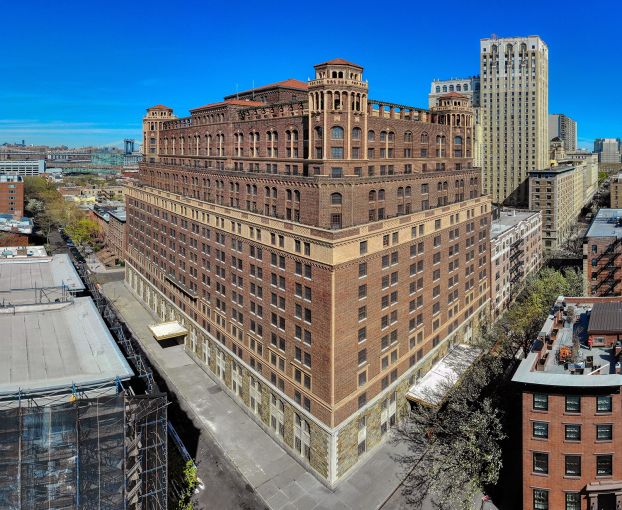 21 Clark Street in Brooklyn Heights was originally built a century ago as a residential hotel, and is now being converted to a pricey senior living development. Photo: Watermark 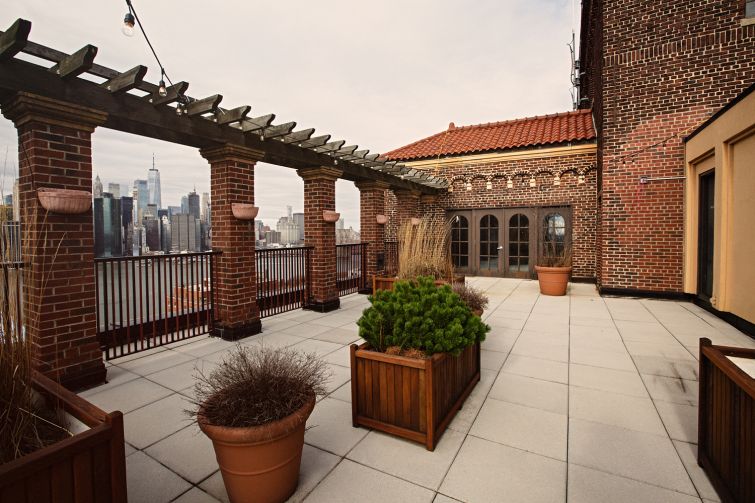 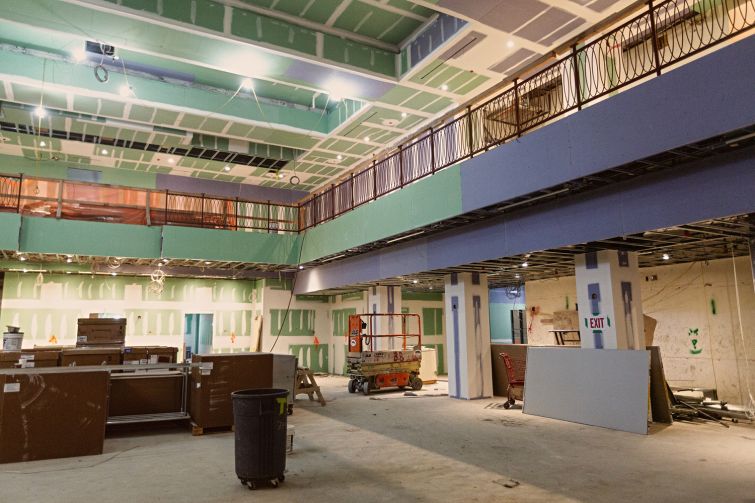 A second-floor mezzanine has been opened up to create a dramatic two-floor space for the main dining area. Photo: Emily Assiran/For Commercial Observer 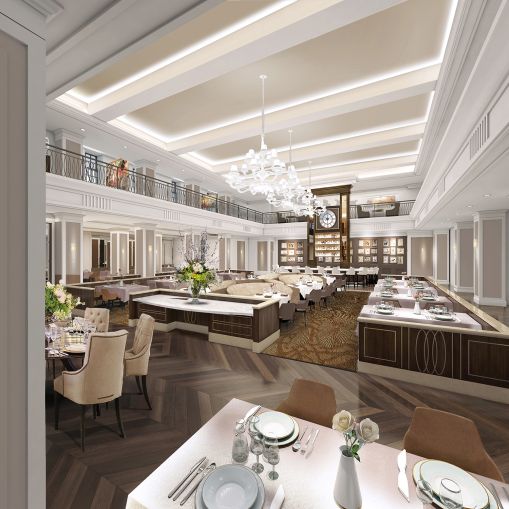 A rendering of the first-floor dining room. Rendering: Watermark 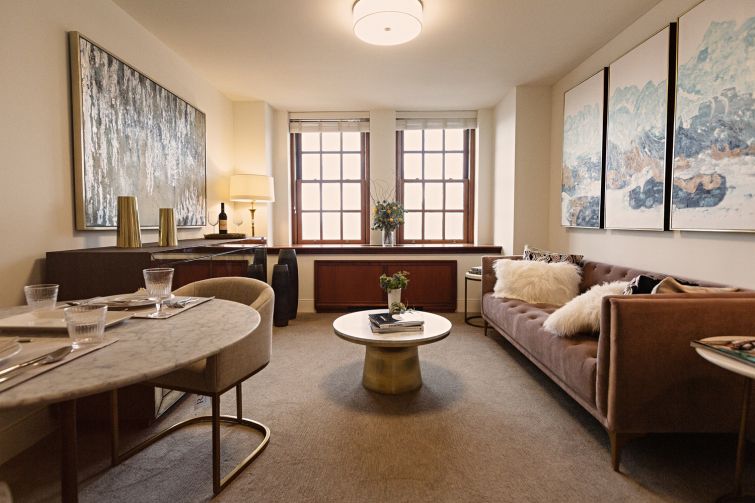 Apartments in the building will range from studios to two-bedrooms and rent for $10,000 to $16,000 a month. Photo: Emily Assiran/For Commercial Observer 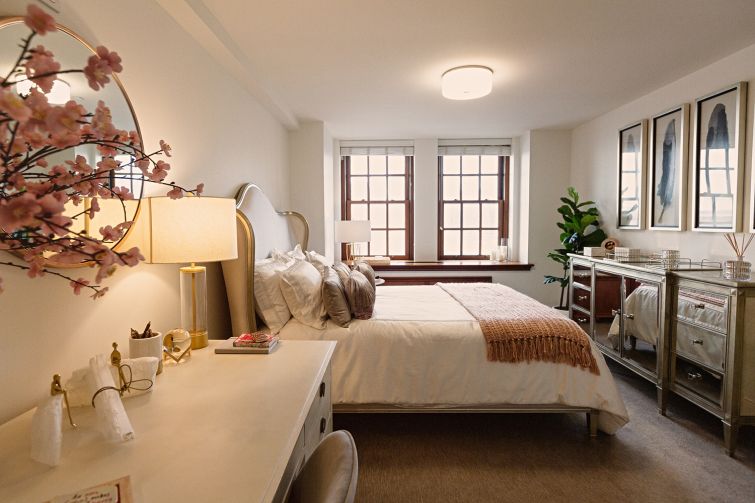 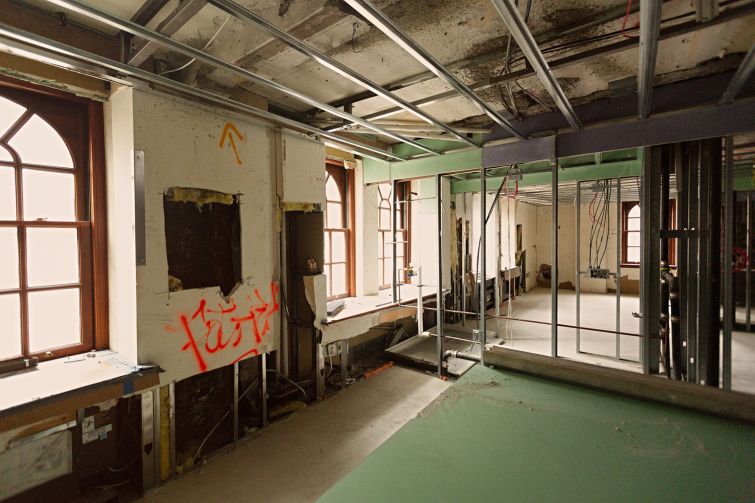 Construction on a memory care floor, which will offer round-the-clock care for patients with dementia and Alzheimer's. Photo: Emily Assiran/For Commercial Observer 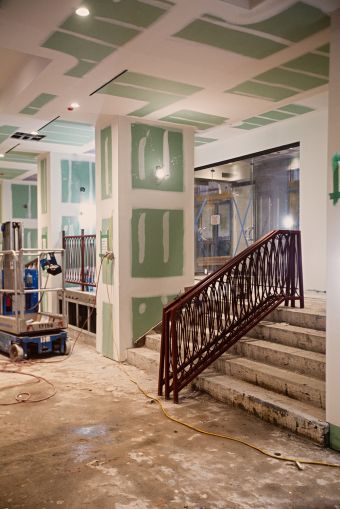 The first floor will include a French bistro and a library and lounge area, as well as an art gallery. Photo: Emily Assiran/For Commercial Observer 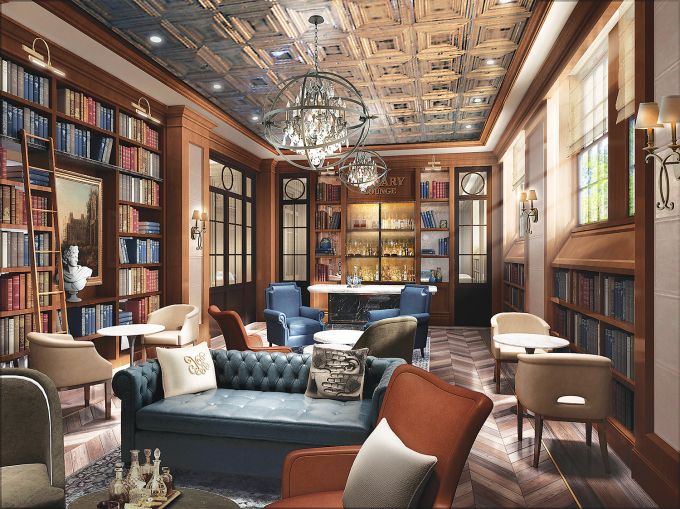 A rendering of the planned library, which is part of 50,000 square feet of senior amenities. Rendering: Watermark 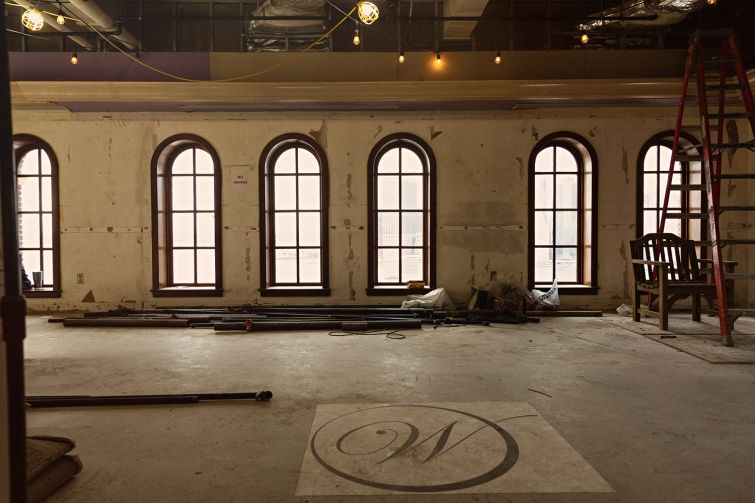 Original window shapes were kept throughout the building, including these distinctive round windows on the 16th floor. Photo: Emily Assiran/For Commercial Observer
Previous Next

The former Leverich Towers Hotel at 21 Clark Street in Brooklyn Heights has had many lives—a residential hotel for wealthy Brooklynites, a Yiddish radio station and apartments for Jehovah’s Witnesses. Now it’s being renovated into a high-end senior living facility where typical rooms rent for $10,000 to $16,000 a month.

Kayne Anderson Real Estate and Freshwater Group are revamping the 16-story property at a cost of $63 million. The finished project will have 275 apartments, including 29 for independent living, 204 for assisted living and 42 for memory care. The units will range from 400-square-foot studios to 850-square-foot two-bedrooms.

The first floor and basement levels have been extensively renovated to accommodate 50,000 square feet of amenities, including a French bistro, wood-paneled library, chilled wine storage, multiple dining rooms, a 44-seat theater, yoga rooms, two different hair and nail salons, a full gym with a glassed-in wall overlooking a lap pool, a full-service restaurant, a demonstration kitchen, rooms for massage therapy and acupuncture, and sitting rooms themed around Brooklyn history. A former mezzanine on the first floor has been demolished and opened up to create a wraparound balcony overlooking a large, main dining room below. Part of the first floor will also host a public contemporary art gallery curated by art consultancy nAscent Art. Two floors for memory care tenants will include a private outdoor courtyard and a planting room with raised beds where residents can garden. The 16th floor will also have a large outdoor terrace with four pergolas and seating that has sweeping views of the East River and both bridges, all of which were constructed as part of the original building.

“The idea is to create interactive social spaces between the residents and their children who will visit,” said Richard DeMarco, whose firm Montroy DeMarco Architecture is handling the renovation.

Meanwhile, the apartments have been upgraded with kitchenettes that include small, stainless steel fridges, stoves and ovens (for independent living units) and new modern bathrooms with sliding barn doors. The heating, cooling and electric systems have remained largely the same as they were when the Witnesses owned the property, according to construction manager Paul Cenzoprano from Tishman Speyer. Many of the original wooden finishes from the apartments—including doors, radiator covers and window frames—were simply kept and repainted, because they were in excellent condition.

The Jehovah’s Witnesses purchased several Brooklyn Heights and Dumbo properties in the 1970s and created a network of underground tunnels between them, which made it easier for their maintenance crew to move between buildings. 21 Clark had one of those tunnels in the basement, but workers recently walled it off during construction of the senior living amenities. The lowest basement level also has another remnant from the Witnesses—a massive room built to accommodate more than a dozen boilers and chillers. The boiler plant served three or four neighboring buildings in addition to 21 Clark, and it was so large that a round-the-clock maintenance man kept a bed and a stove next to the boilers. Tishman replaced the large boiler plant with a much smaller number of modular boilers and chillers, which are cheaper to run and easier to maintain. Tenants are expected to arrive in March.